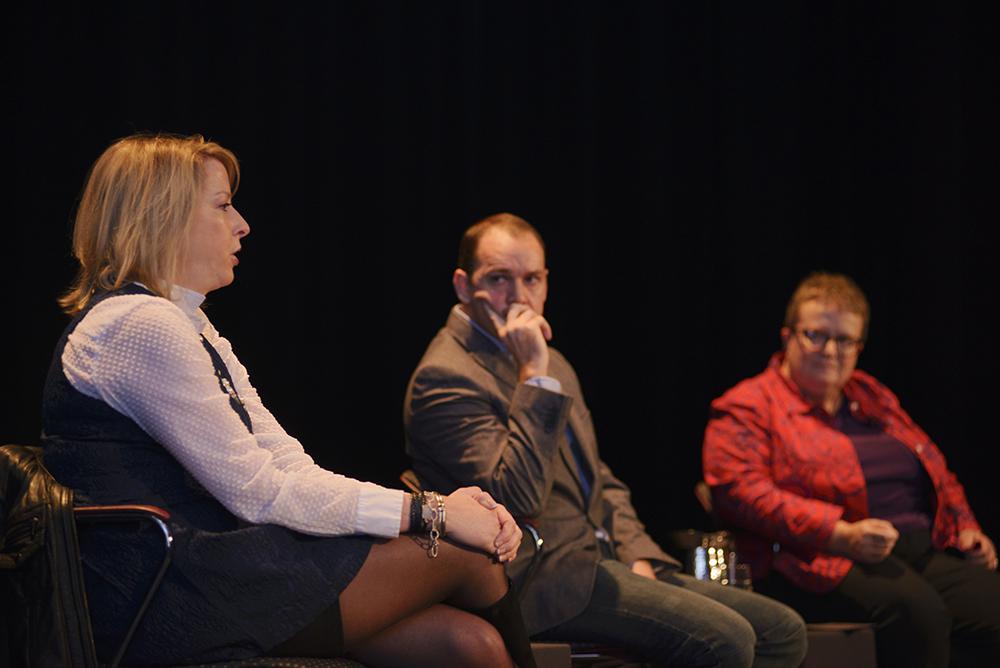 Thirty people attended the talk, which was hosted by the school’s Office of Communications and Marketing and Office of Development and Alumni Relations.

In June, the Market Basket board of directors, led by Arthur S. Demoulas, ousted Arthur T. Demoulas from his presidency, leading the majority of the company’s 25,000 employees to strike until the end of August.

Both Griffin and Ross said they quickly recognized this would be a big story because of the scale of these protests.

The Market Basket employees weren’t asking for better pay, according to the Boston Globe. Their objective instead was to reinstate Arthur T. and secure their current benefits, before the family-owned company could be sold to a larger corporation. Arthur T. ultimately bought back the company and regained his presidency in late August.

When the forum opened to public comments, Nick Fosman, a freshman journalism major, shared his experiences of working during the conflict at a neighboring grocery store. He said that customers joined the Market Basket protest by shopping at other stores.

“The panel was good for letting those who didn’t know the situation learn other opinions on it,” Fosman said in an interview with the Beacon.

Griffin said that when she first started working for Arthur T. in July 2013, she took note of how much he cared about the workers. At the time, she said, Arthur S. was leading a subtle campaign against Arthur T., attempting to characterize the company president as power-hungry and uncaring.

“It was a death by a thousand cuts,” said Griffin of Arthur S.’ workings against his cousin. “The board wanted to run the company.”

Both panelists had complaints about how Arthur S. ran Market Basket during his short tenure, particularly the distance that board members maintained from the rest of their employees and the public. This was a contrast from what Griffin said was a familial aspect of Arthur T.’s presidency.

“They almost deliberately made themselves like this nameless, faceless corporation,” Griffin said.

The panelists discussed what could happen with Market Basket employees once Arthur T. retires. They said that the family-friendly and low-price brand of Market Basket is known by customers in the area, and both panelists were confident he would leave in a way that would ensure continuance of that brand.

“So many people do identify Artie T. so closely with Market Basket,” he said.