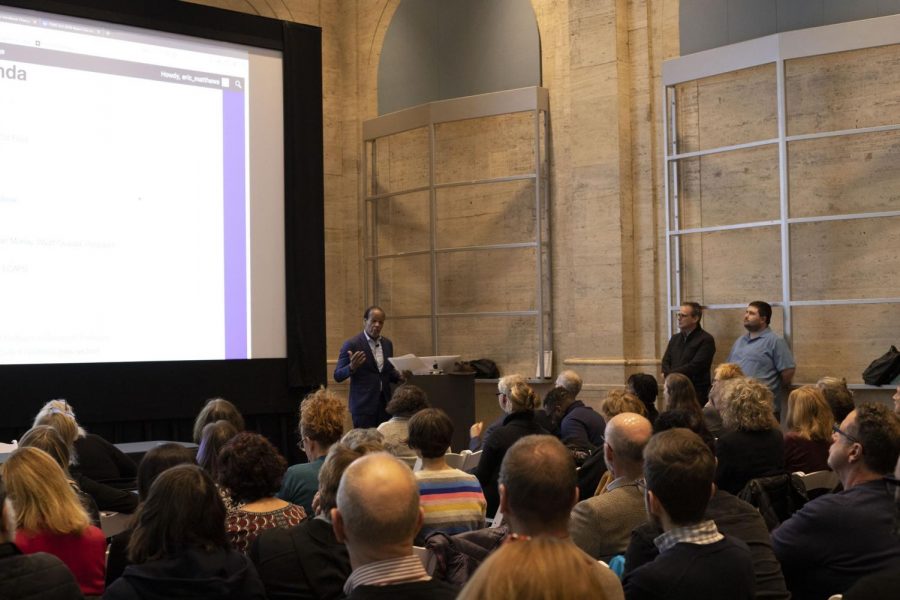 A faculty assembly meeting in January.

College administrators faced questions about how the merger with Marlboro College would impact Emerson’s tenure and curriculum processes at Tuesday’s Faculty Assembly meeting, which drew over 100 faculty and staff.

Provost and Dean of Academic Affairs Michaele Whelan told the assembly there are six tenure track and 18 tenured faculty from Marlboro who, under the terms of the agreement, are guaranteed positions at Emerson.

One Visual and Media Arts faculty said she was nervous that the influx of new faculty would throw off their plan for growing the department.

“We have an agenda of who we want to hire, and we’re afraid this is going to impact our ability to grow our department as we envision it,” she said. “They will take up tenure track positions, and tenured positions that we would normally want to have control over filling.”

Whelan said the faculty coming in from Marlboro would not decrease the amount of new hires the college hopes to bring in, which means that departments could continue to shape their curriculum.

“They are, in a way, a gift,” she said during the meeting. “Having a substantial number of creative faculty, very talented people come to us that we wouldn’t otherwise have. That will strengthen our liberal arts and our other disciplines, because not all the new faculty will be in the liberal arts.”

Pelton said this process was not normal for institutions so it would have some negative impacts on the departments, but he stressed that the net result for the college would be positive.

“Not to say it will be easy, not to say that every individual will be happy with the outcome,” he said. “But I want to consider that in the context of the overall financial benefit to the college.”

The current terms of the merger stipulate that all of Marlboro’s $30 million endowment will be transferred to Emerson along with its real estate, which is valued at $10 million.

“Having the income from [the endowment] plus income from students who would attach themselves to the Marlboro Institute will benefit everybody in this room because it will allow us to have resources that we do not now have,” Pelton said to the assembly. “I think it is premature to make judgments about the outcome because the outcomes have not been realized yet. But I certainly understand the impact of this on departments and individuals.”

During the assembly meeting, representatives from the Emerson Police presented a slideshow about their new app which is being developed. The app, LiveSafe, will include important phone numbers for the Emerson community, such as ECAPS, the Title IX Coordinator, and the Center for Health and Wellness, along with a guide with information regarding what to do in extreme weather, how to report crimes, and what to do for utility issues.