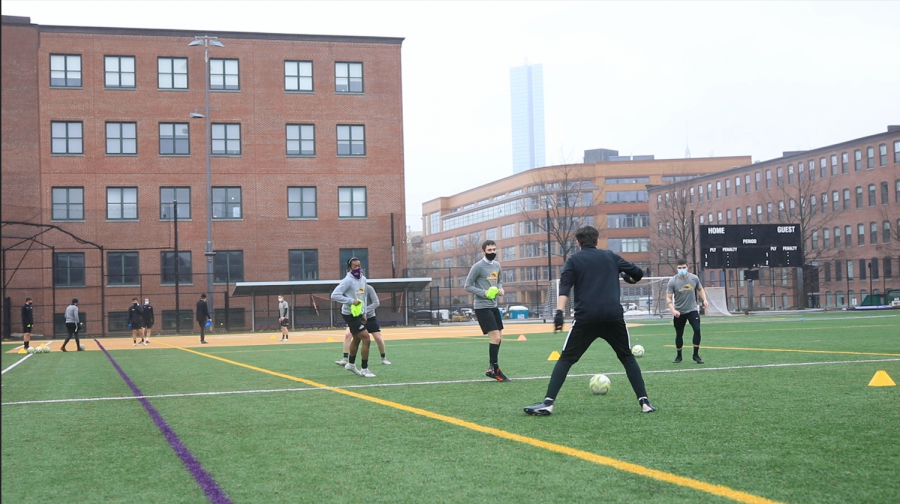 The men's soccer team trains at Rotch Field in the South End three times per week.

Emerson’s fall sports teams began their spring training sessions on Feb. 17, nearly a year after their initial training for the later-canceled fall season was cut short by the pandemic.

These practices mark the first time that the soccer and volleyball teams can practice together since the onset of the pandemic and the New England Men’s and Women’s Athletic Conference’s cancelation of the fall 2020 season in July.

These Lions have not played a meaningful game since 2019. Still, each team stayed as committed as ever in the face of adversity throughout the past year.

“It’s been challenging, but we’ve tried to keep in contact as much as possible, just trying to keep the guys motivated,” head men’s soccer coach Bryan Harkin said in an interview.

Harkin said it was not always easy keeping players on the same page amid the pandemic. Players were scattered throughout the country over the summer with varying access to gyms and other facilities to hone their skills. Athletes and coaches credited Ron Smithers, manager of the Fitness Center, for sending teams workouts adjusted to the players’ unique circumstances.

“[Ron] would know which of us had access to a gym and who didn’t and give us specific workout plans based on that,” sophomore women’s soccer midfielder Cali Bruce said in a Zoom interview.

Both players and coaches credited Smithers for getting creative when coming up with exercise plans since many of the Lions were unable to attend a gym while home for break.

“A lot of the things they were doing were body weight [exercises], less going to the gym,” head women’s soccer coach David Suvak said in a Zoom interview.

Staying in good physical shape was only half of the battle for student-athletes, as they noted the detrimental impact of the pandemic and isolation on their mental health. Coaches and team leaders knew they needed to stick together and remain in contact during the pandemic, perhaps more than ever before, according to Harkin.

“We’ve always tried to look at the positive things, which is [that] we’ve probably been in touch with each other a lot more, building those relationships,” Harkin said.

“We had a lot of Zoom calls where we hung out and played games,” junior women’s volleyball player Lauren Quan said in an interview.

Teams can finally assemble as they once did, except now with social distancing protocols and enforced mask-wearing at all times. Some teams, like the women’s volleyball team, have so many members that they are forced to split into smaller groups of about eight players to practice due to Emerson’s capacity restrictions.

While it may not quite be “back to normal” yet, athletes and coaches agree this new reality is better than nothing.

“It’s kind of weird that we can’t get together as a team, and that’s what we’re itching to do,” head women’s volleyball coach Ben Read said in an interview. “We just want to do more things as a team, we want to see each other, but honestly it’s just nice to be back on the court. To actually see people face-to-face and play volleyball is a joy.”

The spring season presents a unique opportunity for each Lion. For juniors like men’s soccer defender Darius Boamah, these practices can be seen as a springboard towards a successful season next fall.

“We’re just trying to build a culture where we work as hard as we can all the time,” Boamah said in a Zoom interview. “Hopefully people will continue pushing like this through summer then into fall so that by our season we’re all ready and we don’t have to do a fitness test when we get back.”

Grace Tepper, a senior on the women’s volleyball team, said this spring presents an opportunity that seemed like it faded away back in July. She said it was a difficult decision to dedicate time to the team knowing she couldn’t play another match.

“I think that in the end, it was like, ‘Well, yeah I don’t have a season. This is all I have left,’” Tepper said in a Zoom interview. “No matter what, I love the girls; they’re my family. As long as they’ll have me, I’ll hang around. It would be ten thousand times worse if I couldn’t play any volleyball at all this year than being able to go to practice three times a week with these girls.”

After almost exactly a year without sports, athletes and coaches said there is legitimate hope again in the Emerson Athletics program. From the players’ perspectives, these teams provided some of their best friends on campus, and not being able to practice with each other created a void in their personal lives. Being able to connect again through their common language of sport has been a welcomed experience, Quan said.

“This is such a good group of people, and I love all of them,” Quan said. “I’m just really excited to be back.”

As for the coaches, they spent the past year primarily on recruiting and preparing for their next season, which they now hope will be this fall. The opportunity to reconnect with their players in-person reminded them of why they got into coaching in the first place.

“I’m very excited to get outside of the office,” Suvak said. “To be on the field with the team and train and start thinking about the fall of [2021], I’m super excited about what this team is and can be next season.”

The men’s and women’s cross country teams will begin training next week, according to head coach Brandon Fox.