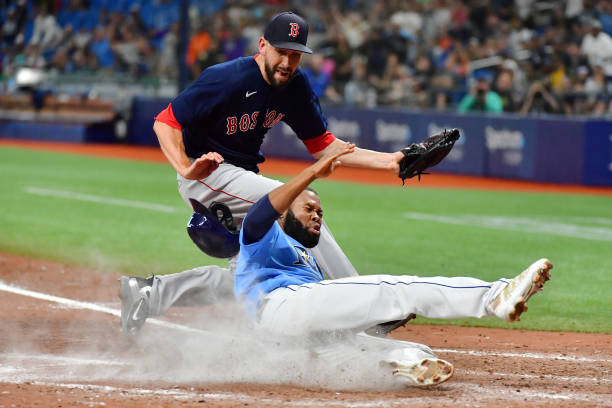 Manuel Margot #13 of the Tampa Bay Rays slides home in the ninth inning after Matt Barnes #32 of the Boston Red Sox threw a wild pitch at Tropicana Field on June 24, 2021 in St Petersburg, Florida. The Rays defeated the Red Sox 1-0.

By Tyler Foy and Camilo Fonseca

The Boston Red Sox were able to take a breath after defeating the New York Yankees 6-2 in the American League Wild Card game on Tuesday night. The rivalry left many Sox fans celebrating but reality hit when the team hopped on their plane to Tampa Bay, Florida.

The Red Sox will be taking on the Tampa Bay Rays in the American League Division Series—a five game series to decide the fate of a 162 game season. The Rays finished with a franchise record setting record of 100-62 and the Sox defied preseason expectations and finished well over .500 with a record of 92-70.

Tampa will be hosting the first two games of the series as well as game five if the Sox force it due to their league leading record. The two teams are no stranger to one another as they played each other 19 times over the course of the season–the Rays won the season series 11-8. Boston is the underdog coming into the series but they aren’t completely out of it yet.

Red Sox Chief Baseball Officer Chaim Bloom came from the Tampa Bay front office to build his own cast of characters in Boston to compete with the well-oiled machine that is the Rays. His work has been well received—the signings of former Rays outfielder Hunter Renfroe and Dodgers utility player Kike Hernandez helped propel the Sox to the postseason. Bloom picked up first basemen/outfielder Kyle Schwarder at the trade deadline, a shrewd move to bolster Boston’s already deep lineup.

The Red Sox bats are far from their biggest problem, as the back half of their rotation is a coin flip at best, and their bullpen has blown numerous games. Outside of performances from starters Nathan Eovaldi or Chris Sale, who is coming off of Tommy John surgery, the rest of the rotation has a 4.66 ERA. On the back end, the Sox don’t have a set closer and have maybe three bullpen arms that can be trusted.

Starting pitcher Eduardo Rodriguez is set to take the bump for game one of the series. In his last start against the Rays he pitched six shutout innings and the Sox went on to win the game 4-0. Unfortunately for Sox fans, the chances of that happening again are slim. Rodriguez has struggled all season, with his ERA ballooning to nearly five—by far the worst season of his career. “E-Rod” as he is affectionately known does have postseason experience, as he was on the 2018 championship team.

The Sox need to face the Tampa Bay Rays pitching factory—the team has a 3.67 ERA—and meet them with the World Series contending offense that has been displayed in the past. The Sox scored 20 runs against the Rays in August.

Once the games get to Fenway, the Rays will be faced with the tough opposing atmosphere of post-season baseball in Boston. There is something special about that Boston crowd and as a person who has been at Fenway during the World Series, I speak from experience. Red Sox manager Alex Cora said that it was spectacular and thanked fans for cultivating the exciting environment.

Although it is a tough series, I think the Red Sox will take game two if Sale is on the bump and once it gets to Boston, it’s gonna go up from there. Boston needs to take one in Tampa and if they do, the Red Sox will advance to the American League Championship Series in four games—upsetting the previous pennant winners.

If you had asked any baseball analyst at the start of the season whether the Rays could measure up to their record last year—champions of the American League and World Series runner-ups—nine out of ten would probably have said no.

There were already signs of offensive struggles last October, and over the offseason, the team said goodbye to two-thirds of its pitching core (including 2018 Cy Young winner Blake Snell) in the offseason. So how come they’re here six months later, vying for their first trophy?

The answer is deceptively simple—the Rays are astonishingly, almost unfailingly flexible. That’s what they have leveraged to get here, and what they will need to leverage to get past the Red Sox.

Even with the loss of its three-man starting rotation, the team has managed to cobble together a surprisingly versatile team of rookie starters and veteran relievers. The Two Shanes (McClanahan, 24, and Baz, 22), along with Drew Rasmussen, have all posted consistently promising numbers. They’re backed up by arguably the most seasoned bullpen in baseball, shuttled up and down from the minors to increase playing time over the regular season.

If the Rays’ rotation is flexible, then the team’s lineup is positively gymnastic. The entire roster is made up of countless variations, and virtually every position, from first base to designated hitter, can be “platooned” as needed. Even though the Rays have no real household names aside from shortstop sensation Wander Franco—who has been the team’s breakout hitter while still being under the legal drinking age—this arrangement makes it so they don’t need any superstars to win.

I take comfort in the fact that the Rays have the slight advantage over the Red Sox in the regular season series (11-8). Nevertheless, the matchup certainly won’t be easy, especially if Boston’s offense is firing on all cylinders. And if the Sox’s bullpen is decent—or at least, better than the travesty that it was for most of the season—it will be a struggle.

But I still rate Tampa’s versatility over Boston’s slugging. At the end of the day, I rate Brett Phillips over Alex Verdugo, Kevin Cash over Alex Cora, and the stingray tank at the Trop over the Green Monster at Fenway.

Maybe that’s wishful thinking, but if I’ve learned anything from the Rays in the past few years, they are always more than what meets the eye. Rays in four.