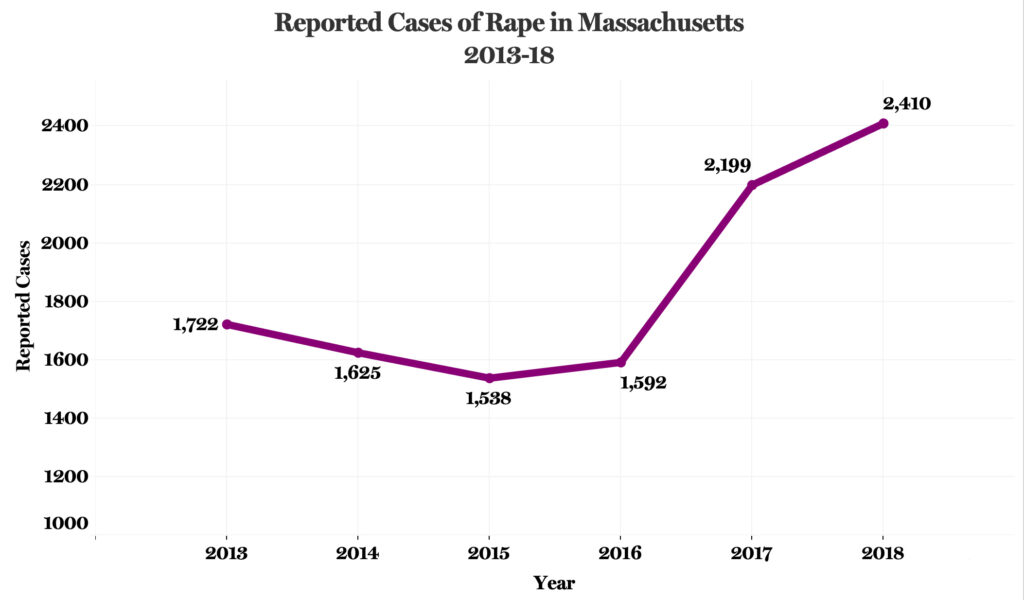 A new report details a 10 percent rise in reports of rape in Massachusetts from 2017 to 2018, according to a new statistic released by the FBI in Sept. 2018—continuing a three-year trend in which rape reports increased almost 57 percent since 2015.

Fifty-nine percent of the reports in Massachusetts come from the Boston, Newton, and Cambridge metropolitan area, according to the FBI.

There were 2,410 reported rapes in the state in 2018 and 1,538 in 2015, according to FBI Uniform Crime Reports (UCR). All other major forms of violent crime declined in the Commonwealth, following a national trend of declining violent crimes except for rape, which rose by approximately three percent nationally in the last year.

“Sexual assault and rape are incredibly under-reported for many reasons,” Executive Director of the Boston Area Rape Crisis Center Gina Scaramella said in an emailed statement to The Beacon. “Generally speaking, the increase in numbers that you’re seeing doesn’t necessarily mean that more violence is being perpetrated. It likely reflects instead that more survivors than before are coming forward and reporting, which could be a result of the ongoing #MeToo movement.”

Emerson collects its own sexual assault data in the annual Clery Report, but the Clery Report data is inconsistent with the national trends outlined in the UCR. Vice President of Equity and Social Justice Sylvia Spears previously told The Beacon that those numbers do not fully represent the number of sexual assaults against students.

“Clery has really specific definitions so it is quite possible, and often the case, that the total number of reports like sexual assault will be higher than the number of sexual assaults that fall within Clery guidelines,” Spears said in an interview earlier in the semester.

Despite the rise in 2018, there were 34.9 reported cases per 100,000 people in Massachusetts, making the state the 11th lowest in the country in that field.

According to the same statistics, only 13 percent of, or 315, rape reports leads to arrests.

Even with the rise in rape reports in the past several years, sexual assault crimes are historically among the least reported crimes nationwide. The Federal Bureau of Justice Statistics estimates that in 2016, only 23 percent of rapes and sexual assaults were reported to police, compared to nearly 44 percent for other forms of violent crime.

“Increased reports [of sexual assault or rape] are not necessarily a sign that prevalence has increased,” Spears said at the time. “It’s actually a sign that reporting might be just a little bit easier.”

Director of the Healing and Advocacy Center Melanie Matson said increased reporting could be the cause of higher numbers of assault reports, but other factors could be at play.

“Some people have said that, given all of the national conversation around #MeToo, that these numbers are rising,” Matson said in an interview. “And certainly that is possible because if everywhere you look, every newspaper you open, every social media you’re scrolling through is bringing up conversation around sexual violence and really all forms of power-based interpersonal violence, it’s possible then that there might be a feeling of ‘Oh yes, I did experience that too and there’s this name for it.’”

However, Matson said she’s hesitant to conflate the #MeToo movement and an increase in rape reporting because of a discrepancy in how rape is defined.

Scaramella said there could be an increase in sexual violence and that BARCC will be watching the data to see trends.

“It is a possibility that there is increased sexual violence. We know that there have been reported increases in hate crimes,” Scaramella stated. “Considering that, on the whole, we don’t generally see much accountability for perpetrators, it’s possible that more people have come to think they can get away with it. Either way, we’ll be watching this and any other data that is released that might give a fuller picture.”

Ultimately, Scaramella said that there is no one reason that reports of sexual violence are on the rise across Massachusetts and the nation.

“When it comes down to it, we can’t really say what the exact reason is, and that’s why it’s so important to focus on prevention,” Scaramella stated. “The immediate public focus when numbers like this are released is often on what people can do to stay safe, but it’s equally important to focus on what communities can do to prevent sexual assault, harassment, and abuse.”

If you have been a victim of sexual assault or violence, please call the BARCC hotline at 800-841-8371 or go to barcc.org/chat.