Fear-mongering in the media has spiraled out of control 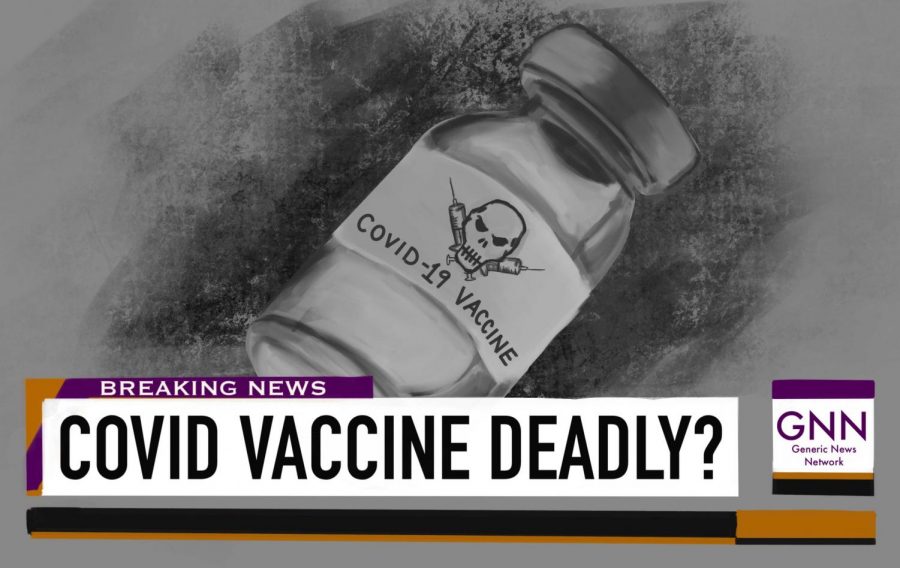 It’s one thing to engage in fearmongering by spreading conspiracy theories on a Facebook message board, and another to give them more coverage on prominent news platforms.

On March 25, NPR published “Few Facts, Millions Of Clicks: Fear Mongering Vaccine Stories Go Viral Online.” In the story, NPR analysts point out that while the odds of dying after receiving a COVID-19 vaccine are virtually nonexistent, articles connecting vaccines to death have been some of the most highly engaged online content in the past year.

With social media becoming a primary source of information for millions, fearmongering, or deliberately arousing public fear to gain readers, is becoming a trend among some reporters. Fearmongering in the media feeds into the conspiracy theories that grip American society today, and have for decades past.

A recent example of fearmongering in the media is a CNBC article titled “CDC to investigate death of Nebraska man who received Covid vaccine dose.” It was later proven that this man’s death was unrelated to the COVID-19 vaccine, and the only connection the article cites is the proximity of the vaccine dose and the man’s time of death.

This kind of reporting is redundant—it’s a fallacy of false dilemma, in which a fake problem is created, assuming that all consequences or premises are true. In this instance, there is no evidence suggesting the COVID-19 vaccine can cause death in its recipients.

As of late, it seems that conspiracy theorists have vehemently inserted themselves in government and political discourse. From COVID-19 to the 2020 election, there are one too many elected officials that, despite their access to expert judgment, believe proven falsehoods. Journalists reported heavily on these claims spouted by former President Trump, bringing more attention to factually inaccurate information.

It’s frustrating trying to report with good faith while many sectors of the media continuously give a spotlight to conspiracy theories, feeding into fearmongering. The reason for this, in many cases, is because these stories have a tendency to become sensationalized. Yet as stated by The Sociological Quarterly, “when fear is the prevailing framework for looking at social issues, then other competing frames and discourses lose out.”

An example of this is Marjorie Taylor Greene, a far-right, QAnon supporter serving as the U.S. representative for Georgia’s 14th congressional district. (For those who are blissfully unaware, QAnon is a far-right movement based on the conspiracy that the government is controlled by Democratic elitists, among other disproven beliefs.)

Greene recently championed the “Fire Fauci” online campaign and introduced legislation on April 1, that would reduce Dr. Anthony Fauci’s salary to $0. The legislation implies that Dr. Fauci, the Director of the National Institute of Allergy and Infectious Diseases, has provided Americans ‘contradictory advice’ in his COVID-19 response. According to the Washington Post, because news like this is so shocking, there has been a spike in stories regarding Greene’s outrageous messages and further sensationalization of these dangerous claims, but not enough explaining why she is wrong.

A good example of the dangers of fearmongering in the media is the 2003 Iraq war. According to Howard Kurtz, American journalist and former writer for The Washington Post, on CNN, there were more than 140 front-page stories in the early 2000s that focused on rhetoric against Iraq—meanwhile, pieces questioning the evidence or rationale for the war were frequently buried or minimized.

With the rise of conspiracy theories becoming relevant, especially related to COVID-19, some journalists who focus on these topics present baseless arguments for the sake of appeasing a certain audience.

For example, the Centers for Disease Control and Prevention’s reporting system has not detected patterns linking any deaths directly to vaccines. Yet according to the NPR study, the top 20 vaccine-related stories shared every day this year, disproportionately focused on people who died shortly after receiving the vaccine. On some day’s like Jan. 16 and 17, 25% or more of the top vaccine stories on social media were about a person who died after being vaccinated, the NPR study said.

According to the CDC, of the 167 million people in the U.S. who have received at least one dose of a COVID vaccine as of April 5, 2,794 people (less than 0.00167%) died soon afterward. Roughly 8,000 people in the U.S. die every day, whether they’ve received a vaccine or not. So as more people get vaccinated, more people will continue to die from unrelated causes. Making a conspiracy out of these deaths because they loosely connect to a relevant subject like the COVID vaccine is irresponsible and dishonest.

Once you feed into a conspiracy theory, it’s only a matter of time before that claim spirals out of control. Take the theory that 9/11 was ‘an inside job,’ in which some alleged that government officials may have known about the attacks of September 11, 2001, in advance. Message boards, like the one that helped jumpstart QAnon, were able to attach themselves to that theory and other anti-vaccine theories in order to spread their own theories.

Conspiracies are a slippery slope. However, it’s one thing to engage in fearmongering by spreading conspiracy theories on a Facebook message board, and another to give them more coverage on prominent news platforms.

According to the World Health Organization, the percent of a vaccinated population needed to qualify for COVID-19 herd immunity, is not currently known—although Dr. Fauci estimated that we need between 75% to 85% of the population vaccinated for herd immunity. When 10% of Americans believe vaccines can cause autism and 30% plan to not get the COVID vaccine, it’s easy to imagine this vaccine hesitancy could stagger the movement towards a COVID-free future.

Journalists need to cover evidence-based news related to COVID-19 above writing headlines that stoke unnecessary fear of a vaccine intended to save millions of lives. Journalists are civil servants, meant to inform and, at times, assist the greater good. During this pandemic, the world desperately needs the media to do its job—with the intent to inform, not just to drive clicks.