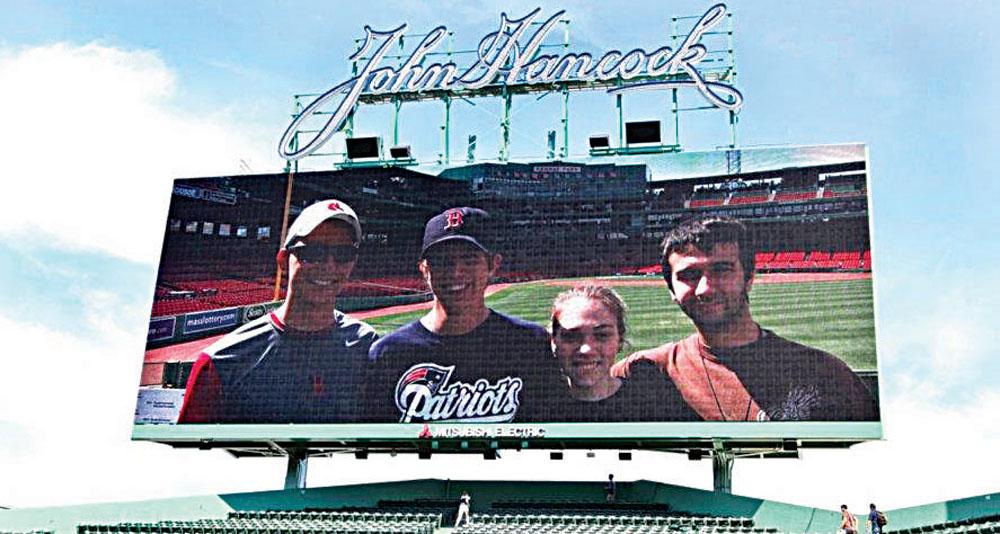 The first time Jacob Ouellette saw Red Sox shortstop Nomar Garciaparra play in Fenway Park, his eyes lit up like a kid in a candy store. Or so he says his mother tells him, because he was far too young to recall. Years — and many baseball seasons — later, his eyes still light up when discussing baseball, the Red Sox, and especially Fenway Park. Ouellette is one of four Emerson sophomores and die-hard Red Sox fans who have been so personally affected by Fenway that they decided to make a movie about it.

Ouellette, a broadcast journalism major, Kelsey Doherty, Luke Fraser, and Kyle Brasseur all met at the Red Sox-Yankees doubleheader at the end of the 2010 regular season. They bonded over their love for the team and quickly became close friends. A year later, they are making a documentary about their beloved park and celebrating Fenway’s 100-year-old legacy in film.

After the resignation of Red Sox manager Terry Francona in October, the four fans created a blog called The Red Seat, named after the lone red seat commemorating where Ted Williams hit the longest home run in the history of Fenway Park. Ouellete, who is interested in sports journalism, is a member of Emerson Sports Network.

Emerson alum Shawn Jenson, who currently works as a freelance producer and has worked for New England Sports Network and the Red Sox as well as for the Patriots at Gillette Stadium, came to speak to the Emerson network, and he helped the group get started.

Ouellette was inspired to take the blog project a step further, and the group embarked on its first film project, a documentary telling the story of Fenway from the experiences of fans.

“It was a slow process at first,” Ouellette said. “We were all new to the process and we didn’t know what it entailed. A documentary on 100 years of Fenway — that’s a big project.”

Over winter break, the team said the project blossomed and new ideas and improvements emerged, including a  35-member crew and the initial interviews from a potential series of fans.

“Our goal is to capture the emotional appeal of Fenway Park through the personal narratives of fans,” Ouellette said. “We want to talk to sports writers and employees there as well, but our main focus is on the fans because Red Sox Nation is so big and everyone has a story to tell.”

The documentary is not just a narrative description of how Fenway came about — in fact the storyline of the movie will be determined by the stories of the fans and interviewees. So far they have recorded interviews with a past employee, a fan from the 1980s, and a fan-based clothing company, and they have plans for dozens more.

Red Seat Productions hopes that fans will tell the stories of famous legendary events, such as the stories behind the Green Monster and Pesky’s Pole,  but in the end, it is up to the people being interviewed and the stories they have to tell.

“It’s not us telling the stories,” said Fraser, a visual and media arts major. “We want the story that goes along with what everybody knows.”  He described the ideal interviews with “superfans” who saw incredible plays or even less-than-remarkable moments, made special  because it was the first time they went with their son or daughter.

The four filmmakers are taking their chances with the interviews they get, but they feel that just makes what they are doing more important.

“The fans kind of dictate where we take it,” Brasseur said. “Their interviews are going to be the ones that provide us with what we have to talk about. We’re just putting it together.”

Though the producers know a lot about the history of Fenway, Ouellette says the focus on the fans is what sets the project apart.

The Red Sox Department of Human Resources  could not be reached for immediate comment on the project.

Ouellette, Fraser, Brasseur, and Doherty, all New England natives,  could be considered among the ranks of their “superfans”— each creator has childhood memories associated with Fenway Park.

“I absolutely love baseball,” said Doherty, a marketing communication major. “I can’t get enough of the Red Sox, and Fenway is probably my favorite place on this earth.”

Brasseur told the story of how he visited the park with his father for the first time in his senior year of high school, and how it brought them together.

“It means a lot,” the broadcast journalism major said. “[Fenway has] been there for a long time, it has so much history in it, and we want to celebrate the history by capturing the fan’s views on it.”

Fraser, a Watertown resident, said he grew up with the Red Sox,  becoming a die-hard fan starting with that first game at age four. “My happiness depends on that team’s victories,” Fraser said, “It’s gotten to the point where it’s a little obsessive.”

The Red Seat team’s passion is obvious in the way they talk about Fenway, and it’s clear they plan to use that drive and emotion in the creation of the documentary, which is tentatively set for completion in September 2012, when the 100-year anniversary officially arrives. The friends are still looking for crew members and funding opportunities, and they need all the help they can get to create this challenging but important profile of the oldest standing and active ballpark in the entire nation. But again, as Ouellete put it, it’s all about the fans.

“The Red Sox Nation is the biggest and best sports family you’ll ever find.”