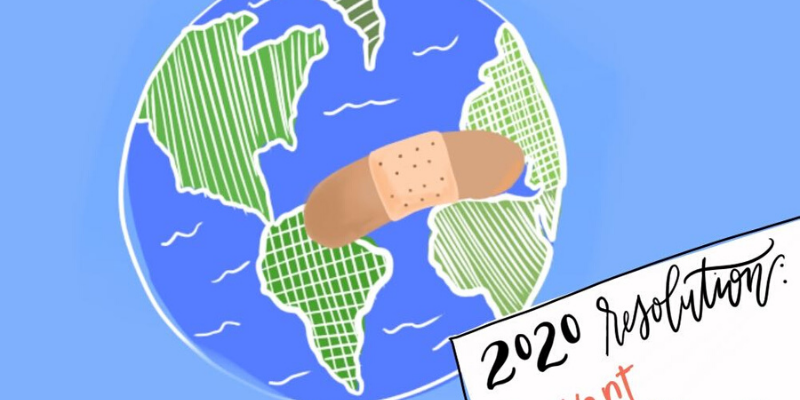 My New Year’s resolution was to take my vitamins every day. I wanted something simple and attainable considering 2020 is the big year I graduate and start my career. However, my boyfriend said it was lame and I shouldn’t be afraid of committing to something bigger, like fighting climate change.

When I scrolled through my firsthand photos of the bushfire smoke from my family trip to the Blue Mountains in Australia last December, I realized he’s right. But fighting climate change shouldn’t just be my New Year’s resolution––it should be everyone’s. Earth isn’t just my planet, it’s everyone’s too, and inaction is not an option.

The Amazon rainforests lost land equivalent to about 8.4 million soccer fields this decade because of deforestation. Since September of last year, over 1 billion animals were killed in the Australian bushfires, according to biodiversity expert Chris Dickman. Videos of forests burning and animals suffering continue to circulate the Internet, and all of the news and facts about climate change can easily make us feel defeated, powerless, and discouraged to even fight.

“Climate emergency” was the Oxford word of the year in 2019. But a new year is a fresh start. We all get excited to go to the gym, start a new diet, quit a bad habit and more basic resolutions to start this January. If we can put all that newfound hope, drive, and energy into ourselves, then we should also apply it towards the planet. Last year, everybody was alerted with how serious the crisis is, but this is the year everybody should act.

“To truly transition our society away from the era of fossil fuels, we need a culture shift that is only going to happen from individual action,” Katie Eder, climate activist and executive director of the Future Coalition, said to Teen Vogue.

My brother’s resolution this year is to reduce his carbon footprint by commuting instead of driving. Changing daily habits can help fight climate change. Unplug devices overnight. Reuse plastic bags as trash bags or carry your own reusable shopping bag. Propose a compost pile in your family home. Shop secondhand at Depop or Goodwill. Swap in eco-friendly and sustainable products. Eat less red meat. Adopt a koala. Use Ecosia, the search engine that plants trees, instead of Google.

Personal actions like these are small, and it’s going to be hard to follow through knowing these habits alone aren’t enough to solve the crisis. Thus, arguing personal behavior change is pointless and meaningless compared to collective political action. Many environmental advocates and commentators said individual action draws attention away from the governmental action needed for climate justice. The Daily Beast columnist Jay Michaelson said focusing on personal action lets corporate polluters, who are the true culprits of climate change, off the hook.

It’s easier to blame politicians and world leaders for not taking political action than it is to follow our new personal habits. We share a photo of a burnt baby kangaroo on Instagram, bash the Kardashians for not donating to the Australian Fire Relief, and exclaim how the net worth of Jeff Bezos, Bill Gates, and Warren Buffet should be enough to stop the rise of climate change on Twitter.

It’s also easier to put the responsibility on others and let our individual resolutions be a part of the 45 percent of those that fall through by February. It takes more than two months to start a new habit, not three weeks. I honestly forgot to take my vitamins on the sixth day of the year anyway.

But messing up every now and then doesn’t affect the habit formation process. I’d rather try again than give up and let the world literally burn.

“When you choose to eat less meat or take the bus instead of driving or have fewer children, you are making a statement that your actions matter, that it’s not too late to avert climate catastrophe, that you have power,” Jason Mark, editor of Sierra Magazine, said. “To take a measure of personal responsibility for climate change doesn’t have to distract from your political activism—if anything, it amplifies it.”

Collective political action and personal action aren’t separate; they’re self-reinforcing. We need to fight climate change with both, and climate scientist Michael Mann said there’s no substitute for the other.

By registering to vote, calling our local politicians, and supporting grassroots climate action organizations, we can use our individual resolutions to reinforce political action in our communities.

The news will discourage us. We’ll forget to bring a shopping bag to the store, and maybe we’ll question if it’s better to just do nothing and die young. But it’s important that we keep trying and believing we can fight climate change together.