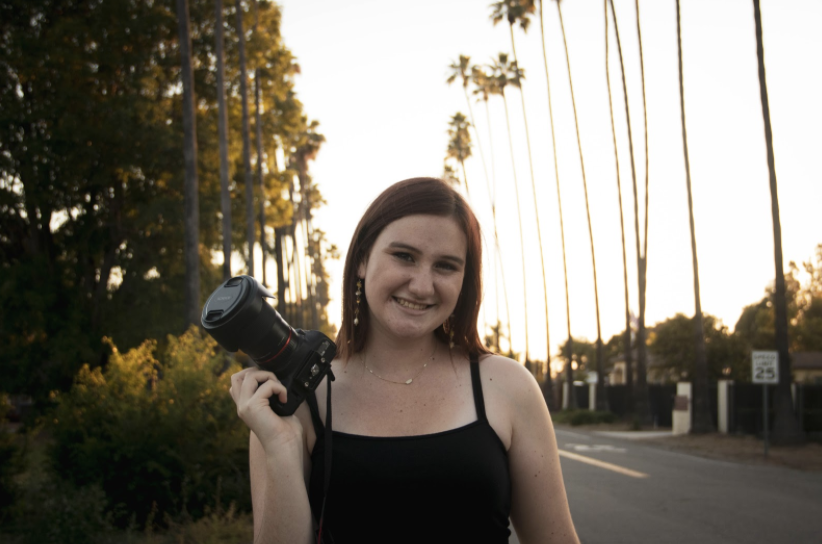 First-year student Miranda Nicusanti, a visual and media arts major from Orange County, CA, photographs the dining center meals for her Instagram food review account, @emersonfoodreview. The account, which has amassed almost 500 followers since Feb. 1, features pictures and reviews of the meals being served at the dining hall almost daily.

After she picks up her dinner from the dining center, Nicusanti takes out her camera and photography lighting before opening her utensil packet.

“I usually just will bring the food back to my room and take a couple of pictures,” Nicusanti said. “Then, I’ll eat it and take notes on what I think.”

She writes a brief review of each dish, expressing either her delight or disapproval, and then puts them as captions under the photos of her meals.

Nicusanti, who deferred a semester to focus on her two jobs at a portrait photography studio and gourmet restaurant, came to Emerson in the spring with the skills needed to run a food review account.

“Back home, I have a ton of studio portraiture stuff, but obviously I can’t fly on a plane with, like, 14-foot backdrops,” said Nicusanti. “So, I’m kind of just doing it on my own, which is fun.”

In light of Nicusanti’s account, others have popped up in the weeks since. Other accounts that have been gaining traction alongside Nicusanti’s include @530foodreviewatemerson and @isthedhworthgoingtoday. Each of them has their own style and flair, with different takes on each dish.

Nicusanti said she started the account as a fun distraction from the stresses of the pandemic and stated that it is a positive activity to do alongside her everyday responsibilities. She likes how she can post pictures that are inconsequential.

“I overthink my main Instagram too much because I’m a ‘Gen Z-er’ who is so attached to their phone,” Nicusanti said. “I hate it, but that’s definitely who I kind of am sometimes. The food account’s super fun, random, and easy, which I kind of need every once in a while. Also, I just hope people like the pretty pictures.”

Nicusanti explained that she didn’t make the Instagram account with any plans to get the dining center to change its food or operations. To her, this is simply for fun.

“I think it’s totally fine,” Nicusanti said of the dining center cuisine. “It’s dining hall food. It does the job. We are fed. I have no clue what it would be like if I was a vegetarian or vegan here, or someone with dietary restrictions, though.”

In regards to her food reviews, Nicusanti said she’s been kind about the food, which has garnered criticism from friends who wish she would be more harsh about how it tastes.

“I know how much effort and thought that gets put into it, so it’s really hard to write not-nice things,” said Nicusanti.

Despite the minor criticism, Nicusanti said she appreciates the connections the account has allowed her to make.

“I did make some friends who DMed the account and were talking about food,” Nicusanti said. “People DM me quite often, being like, ‘You need to go review this!’ and I’m like, ‘I’m in bed!’”

Nicusanti stated that the account gives her an opportunity to build something outside of herself.

“I just wanted something that I could work on and grow,” Nicusanti said. “I really do like food, so maybe food styling is something I’d get into someday.”