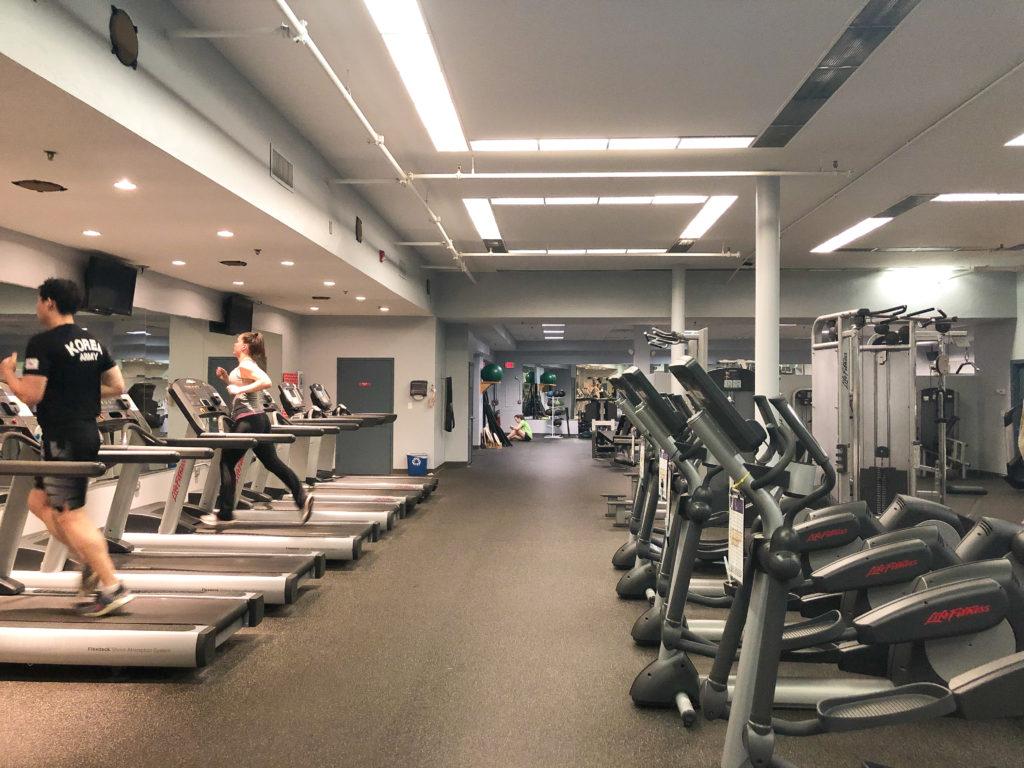 The college delayed the opening of the fitness center to the fall 2021 semester. Photo by Sabrina Ortiz / Beacon Correspondents

Ethan Young, one of three captains on the baseball team, said he and his teammates use the Fitness Center every day, including 6 a.m. sessions once a week. He said when he was a sophomore living on-campus in 2017, it wasn’t a huge problem that the Fitness Center moved from the Little Building to 52 Summer St.

Now that Young has moved off-campus, he said it is more of a nuisance. Because of this, he said he looks forward to having it in Piano Row.

“I think it’ll probably actually be more beneficial to those not on sports teams because we have mandatory times where we have to be in the gym. We’re going there no matter what,” Young said. “For everyone else, it can be hard to get yourself to walk 15 minutes to work out. But if it’s in your building or two doors down, it’ll be much easier for those who want to be more active.”

The college plans to locate the entire Athletics Department to one building for the first time in its history by moving the Fitness Center from 52 Summer St. to Piano Row, according to college officials.

Young said he hopes the space in Piano Row will be just as big as the one in 52 Summer St. The Summer St. location is substantially larger than the space in the basement of Little Building where the Fitness Center used to reside, according to Athletics Director Patricia Nicol.

James Hoppe, vice president and dean of campus life, said the Fitness Center will relocate to the first lower level floor of Piano Row. The floor currently holds meeting spaces for clubs and organizations, like the Multicultural Center.

Hoppe said the start and end date of the project depend on the construction at 172 Tremont St., as that’s where the new destination for student meeting spaces will be housed.

The price of the gym move also remains unclear because the college has not hired a contractor yet, according to Senior Associate Vice President for Real Estate Arthur Mombourquette. The college began its search for a contractor in November, but Mombourquette said this process can take 40 to 60 days.

Mombourquette said the college recently sent out general plans for the project in order to find a contractor. After 30 to 45 days, he said the school will choose a contractor and discuss specific details which can take another couple of weeks. When this process is complete, there will be a better estimate of the cost of the project and how long it should take.

General Manager of the Fitness Center Ron Smithers said these preliminary plans are likely to change throughout the process, and he is unsure whether there will be a period of time where the Fitness Center is unavailable to all students.

The Fitness Center moved from the basement of Little Building to 52 Summer St. when construction on Little Building began in May 2017. Hoppe said the move to Downtown Crossing was always temporary—it was just unknown to where the gym would return.

According to Emerson’s 2018 Institutional Master Plan, the college’s lease of 52 Summer St. expires in fall 2019.

“When 172 Tremont St. was purchased, we were looking at potentially putting the Fitness Center there, but it became apparent very quickly that the space there just wasn’t right,” Hoppe said. “We had to figure out how to move the different puzzle pieces around, and this worked out perfectly.”

According to Smithers, all of the current equipment will be moved over and some will be upgraded. He said the new equipment has not yet been purchased.

“This is only going to add to the experience for our students,” Nicol said. “My department is certainly going to benefit from it but I think the intent is what’s best for the student body while also taking into account the needs of the athletics department which we greatly appreciate.”