For a more equitable community (and newsroom) 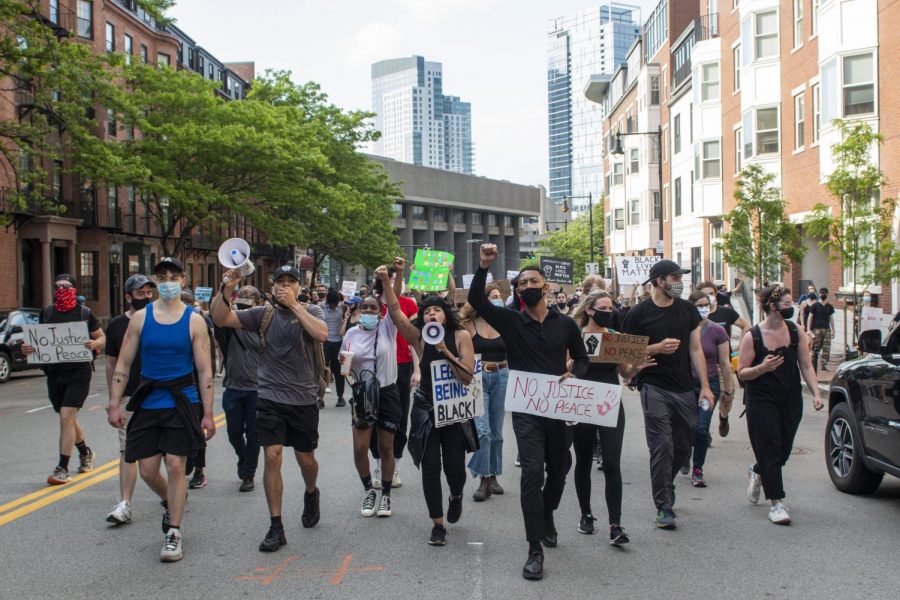 On June 1, as inklings of warm summer air crept in, a massive protest overtook the streets of Boston, just steps from Emerson’s campus. Demonstrators marched to get justice for the countless Black lives lost at the hands of the police. They held their fists in the air to fight the systems of oppression that have burdened Black people for centuries. Bostonians waved signs and honked horns in rebellion of the racism, hatred, and bigotry that poisons every facet of American life.

The Beacon stands with them. We encourage everyone forging a path forward for a safer and more equitable America, and we actively renounce the violence and systemic racism that plagues the country.

The nationwide protests, sparked by the recorded killing of Minneapolis man George Floyd by four police officers, have persisted for three weeks now. Since the first night of protests in May, more Black men and women have died violent deaths that spread through social media like wildfire, fueling the nation’s understandable anger.

So it is unsurprising the momentum of this movement has not slowed. Instead, it continues to require our attention, effort, and financial support.

Following their example, The Beacon pledges to donate a portion of its funds this fall to the NAACP Boston Chapter and Mass Action Against Police Brutality.

At this moment, we also believe it’s well past time Beacon management re-evaluate the diversity of the paper’s staff and our coverage of communities of color. As a predominantly white institution, only about 4 percent of Emerson’s student population is Black; a similarly small percentage of the faculty identifies as people of color. But there is no shortage of stories — news, features, and opinion — to be found in these communities.

Each week, The Beacon’s staff explores story ideas with the goal of providing a comprehensive and accurate view of campus life. But we recognize how we have failed to develop a meaningful professional relationship with various Emerson multicultural organizations in the past. As the summer winds down, our reporters and editors hope to mend these fraught connections and reach out to student leaders across the college. We promise we will look to the work of these groups early and often going forward.

A handful of our senior reporters are also delving into projects that explore how the College upholds the basic principles of equality, opportunity, and fairness. The Beacon is planning stories about the racial makeup of tenured faculty and the demographics of the student population. It is our responsibility as a news organization to find the root of enduring complaints about the college’s lack of attention towards our minority students.

Members of The Beacon staff have also reached out with actionable measures that could improve our own newsroom. In the fall semester, we will introduce mandatory bias and diversity training from experienced journalists for all Beacon staff. As always, we hope this step helps our reporters hone the skills and nuance they need to become the journalists our community and our world deserves.

As an organization dedicated to informing the Emerson community, we understand how our stories play into the perception of life on campus and of movements like Black Lives Matter. It is imperative we listen to all the voices vying to make the press a more inclusive and diverse place.

We welcome all comments, insights, and suggestions about The Beacon at [email protected]

The Berkeley Beacon Editorial Board is the voice of the student newspaper that looks to serve the Emerson College community with thoughtful insight into ongoings and occurrences affecting their everyday lives. The board’s positions are determined by its members. The board consists of the editor-in-chief, managing editors, and opinion editors. The opinions expressed by the Editorial Board do not impact the paper’s coverage. You can respond to a position brought forward by The Beacon Editorial Board in the form of a Letter to The Editor by email: [email protected]

Correction 6/20/20: An earlier version of this editorial incorrectly attributed organizations’ motivation to donate to different movements and fundraising efforts, like Black Lives Matter.