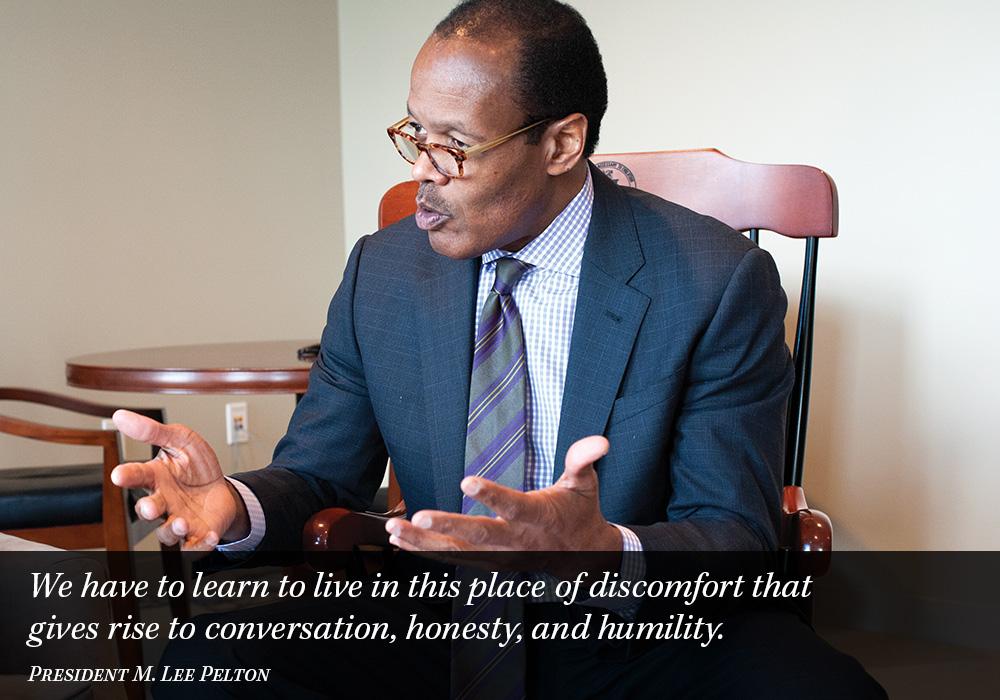 In high school, Sylvia Spears requested only two college catalogs: one for the University of Rhode Island—the public institution in her home state—and the other for Emerson College. But she put aside the one for Emerson, knowing that her family couldn’t afford to send her there, and she didn’t apply.

So in 2012, when she accepted Emerson’s offer to become its vice president for diversity and inclusion, Spears, who is part Native American, said she felt she had gone full circle.

“Now I could come and I could serve so that, to be perfectly honest, students like me, who couldn’t come, could now have greater access,” she said.

Spears, along with a new generation of top administrators at Emerson, said she is working to deepen the commitment to diversity at a school that was once so dominated by white, upper-class, Jewish students that it was nicknamed “Emerstein,” according to A Century of Eloquence, which chronicles the college’s history until 1980.

And for Spears and M. Lee Pelton, the college’s first African-American president, their ability to achieve this goal springs, in part, from a common source: being positioned strongly enough within Emerson to effect change, but also being able to see the institution from divergent, critical points of view.

As a kid, Pelton spent many of his summers in Arkansas—where his great-grandparents worked as sharecroppers—picking cotton, he said in a 2008 interview with a University of Rochester doctoral student. But he grew up on the agrarian outskirts of Wichita, Kansas, in what he described as a “little black enclave in this white section of town.” He attended predominantly white schools where he recalled being excluded from the social circles of the white kids he grew up with.

“And then I had a number of black students at my high school who thought I was kind of an oddball,” he said in an interview with the Beacon, “because I had essentially grown up in a different social and cultural environment.”

In a sense, Pelton grew up on the outskirts of two cultures: not the white culture, not the African-American culture, but somewhere in between.

“I’ve occupied that narrow little band. At times it’s lonely there. At other times it’s a great virtue because I can go back and forth,” he said in 2008. “I can put this mask on, take that mask off and put it down, and put on the other mask.”

Pelton said this has helped him develop a certain consciousness: an ability to understand, intellectually and emotionally, people who aren’t like him.

“I think that experience, for me, has created a capacity that I call ‘sympathetic imagination’ that I think has served me well in life,” he told the Beacon.

Those formative years helped to inspire a persistent commitment to increasing diversity in education.

“As a president who grew up as a poor, African-American kid,” he said in 2008, “I also have a strong sense of responsibility to support and provide opportunities for young folk who don’t necessarily have the opportunities that others have.”

A 1998 profile of Pelton in the newspaper The Oregonian, published soon after he became Willamette’s president, reported that his closest friends considered it “Pelton’s destiny to become a college president.” Even then, he said he hoped to use his new position to “encourage more diversity in higher education leadership.” A 2003 profile in The Oregonian—which called him a “champion of diversity” in the headline—says that “diversity has remained one of his guiding principles” through the years.

But he told the Beacon he believes Emerson is already a diverse, inclusive community. In 2013, the latest year for which Emerson published demographic data, 21.6 percent of undergraduates reported their ethnicity as American Indian, Alaska Native, Asian, Black or African American, Hispanic, Native Hawaiian or Pacific Islander, or “Two or More Races.” White students comprise 64.7 percent of the undergraduate population. International students, and those who didn’t report their race or ethnicity, make up the rest.

Pelton said he recognized, though, that there’s more work to be done at the college.

“There are gaps between our aspirations and what actually occurs, and the recent events in Ferguson and Staten Island and other cities shined a light on these issues at Emerson,” he said, referring to instances of white police officers killing unarmed black men and the protests that have erupted after the officers weren’t convicted—protests which he said he has joined in Boston.

Talking about race and diversity, he said, will be key to changing long-embedded ways of thinking—and continuing to talk until better practices become intrinsic to the institution.

“We all need to bring our sympathetic imaginations to bear on these issues,” he said. “We need to listen intensely to other perspectives to not understand those perspectives, but actually feel them and know them.”

Those discussions, Pelton said, are often uncomfortable—as he has known well since his grade-school years.

“We have to learn to live in this place of discomfort that gives rise to conversation, honesty, and humility,” he said.

In her home Narragansett tribe, Spears said her ceremonial name is Wind Dancer, which she feels suits her well.

When she first got to the University of Rhode Island, though, Spears said she didn’t intend on going into higher education administration. She had declared her major as theater her first year, and the university was getting ready to stage a production of The Crucible. Then, she recalled, the director came up to her and said she should audition—not for any role, but for the character that was equivalent to the maid.

“It’s a fascinating character and all of that,” Spears said, “but I thought, ‘Oh, this is what it means to be in theater at this institution.’”

She said she then switched her major to speech communication, and focused on performing oral interpretations of literature—a technique that allowed her and her friends much more latitude in terms of casting, especially for characters originally written as a certain race.

After graduating, she said she briefly worked in human resources for the Narragansett tribe. There, Spears said she discovered that less than one percent of people in her tribal community had ever attended college—despite the University of Rhode Island being built on tribal land, located several miles from the reservation.

Appalled, she said she then looked deeper into data about demographics in higher education nationwide.

“You’d get to native students,” she said, “and there’d be an asterisk, because there wasn’t even enough for a statistic to show.”

It was then that she said she decided to go to graduate school, eventually intending to show prospective students from diverse backgrounds how to get to college and show colleges how they needed to change to recruit and retain those students.

“I saw my role as being a runner—in the native tradition—between communities that are historically underrepresented and colleges,” she said.

At Emerson, Spears said she is still working to fulfill that decadeslong goal.

“We think of ourselves as a really welcoming, supportive campus,” she said. “And I think on the continuum of all campuses, okay, we’re a little farther along than many.”

Yet Spears said she still hears from students of color about not seeing themselves reflected enough in the curriculum, faculty, staff, and peers. Like Pelton, she said she feels change must start with conversation.

“What I’ve discovered here,” she said, “is as an institution, our level of confidence about talking about race is not high.”

From her office on the 10th floor of the Walker Building, Spears said she frequently sees a hawk that lives near her window. She said she watches it fly over Boston Common and swoop down on prey, mirroring her own professional approach: getting a soaring overview and close-up perspective.

“It’s funny for me to be in this space,” Spears said, “and to sometimes be on my computer and see, literally, this bird that dances on the wind.”