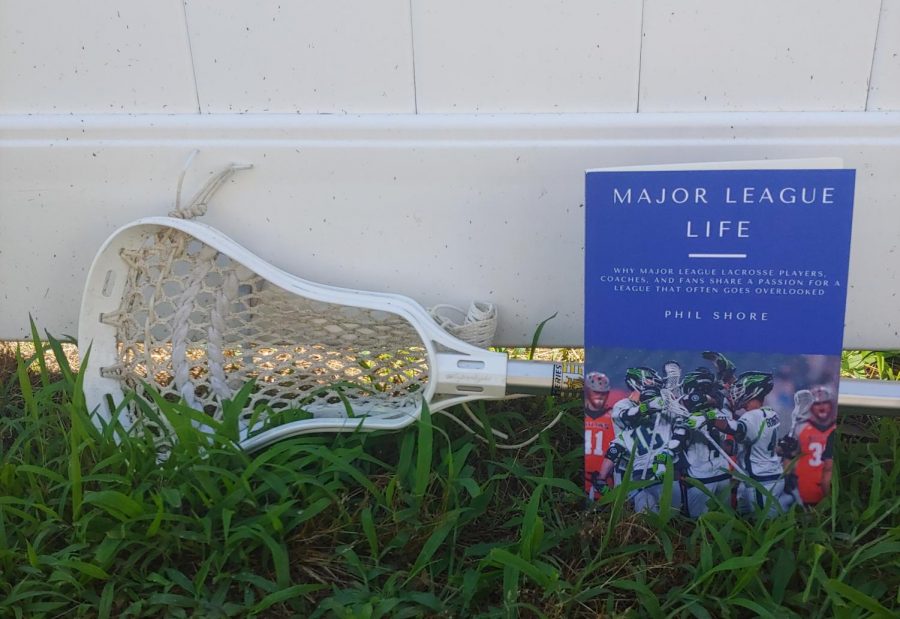 After multiple pitches to publishing companies, Phil Shore took matters into his own hands and self-published his first book.

Major League Lacrosse is far from the most popular American sport. Phil Shore ‘11 chose to shine a light on the beloved activity, often swept aside by mainstream sports media, in his first book, released June 19.

Titled “Major League Life: Why Major League Lacrosse Players, Coaches, and Fans Share a Passion for a League that Often Goes Overlooked,” the book touches on each MLL team chapter by chapter.

The self-published book is now available for purchase only on Amazon.com in paperback and Kindle versions.

During the research process in summer 2019, Shore traveled to six different cities to attend individual different games and interview players and superfans. He first stopped by Boston for the Cannons’ first game of the season on June 1. Then, he went to Baltimore, Maryland, Dallas, Texas, Denver, Colorado, Hempstead, New York, and Atlanta, Georgia.

Shore began brainstorming the idea for his book between late 2017 and early 2018. In January the following year, he and his wife, Brooke, began to plan how they were going to execute his concept and travel schedule.

“It was my 30th birthday and my wife said to me ‘If we are going to do this, there is no better time than now,’” he said in a phone interview from Culpepper, Virginia. “We started making plans on how and when I was going to different cities and if our schedule matches up.”

Shore played for the Emerson men’s lacrosse team through his Emerson tenure and became lacrosse captain his senior year, before graduating with a Print & Multimedia Journalism degree nine years ago. After commencement, he returned to his hometown of Toms River, New Jersey, and did freelance reporting for US Lacrosse Magazine and the New England Lacrosse Journal. He also began working with the lacrosse coaching staff at Toms River High School East then—a move that helped him decide to get his teaching certification.

“It is really obvious that coaching comes naturally to him,” Peterson said. “Not just how he teaches lacrosse but how he is with the players. He is just really good with the boys.”

Peterson was one of the first people to buy Shore’s book. He said he read a couple of chapters so far and enjoyed them.

“It’s really good so far, and I can almost hear him when I am reading it,” he said. “It’s like a friend is telling you a story.”

During the professional lacrosse seasons, Shore writes for the New England Lacrosse Journal once a month and for US Lacrosse Magazine twice a week.

In the book, Shore wanted to give lacrosse fans and players a space to spotlight their sacrifices and passion for the sport. He said he wanted to write a book that all sports fans could enjoy and share stories that are usually overlooked.

Shore said players have to make sacrifices because the sport they play doesn’t make them a lot of money.

“These players sacrifice summers and work extra jobs even though professional players don’t make a lot of money,” Shore said. “Even though it’s a small community, there are superfans that absolutely love it, so why do these players and fans care so much about a league that isn’t part of the popular culture?”

While freelancing in 2017, Shore had the idea of traveling to all six MLL teams and interacting with the superfans in each city.

“I do all of my freelancing work over the phone or over email, so I really wanted to get my face in front of people,” he said.

Shore said it was not easy to find MLL super fans, but he eventually found one per lacrosse team. He contacted the public relations director of every MLL team to find people who attended each game and displayed a passion for the sport.

“I wanted to find a super fan for each city which meant I had to reach out to the PR people of each team,” Shore said. “I already had a Denver superfan planned out because he is pretty famous in the lacrosse community but everywhere else I wasn’t really sure who those super fans were.”

Shore aspired to interview players who were fans of the league growing up. He said he wanted to get the perspective of fans who are now players for the team.

“In Boston, there were three players who were fans as children and now are on the other side,” Shore said. “James Fahey, Nick Marrocco, and Marty Bowes. Those guys all grew up going to the lacrosse games as kids and now they are on the other side which is a cool thing to think about.”

Shore’s personal favorite part of his book is the story of Denver’s goalie Kai Iwamoto, the first Japanese MLL athlete in the United States.

“Iwamoto’s story is the epitome of these guys chasing their passion,” Shore said. “Not only did he travel from Japan to the U.S to play lacrosse, and he became the first Japanese MLL player, he spent three years at open tryouts before he finally earned a spot on the roster in 2019.”

Shore submitted his pitch to multiple publishing companies, and after being turned down, he decided to self-publish the book. Then he became his own editor, cover designer, and publishing staff.

“This book was my vision that I had because no publisher said, ‘yes I want a major league lacrosse book,’ so I had to make sacrifices in order to make my vision come true,” Shore said. “There is something beautiful in creating this book on your own.”

Shore said he found that the most accessible way to self-publish was through Amazon’s free Kindle Direct Publishing. The program allows self-publishing authors to use it for free.

“I had to do everything!” Shore said. “I researched how to do my own cover, and I learned how to format a book. It was a challenge at first but after I learned it became pretty easy.”

Shore said his book ranks first in the category of new release lacrosse books on Amazon.

“Success is pretty relative to everybody, but I’m pretty happy with the feedback that I’m getting,” Shore said.

Shore said he has ideas for books he would like to tackle in the future but, right now, he wants to appreciate his recent success before he starts planning his next project.

“In the immediate future, I do want to enjoy this accomplishment first before I start a new project,” Shore said. “I want to wait for more reactions and gain some momentum before I execute any of the few lacrosse ideas. Right now, I just want to enjoy my summer with my wife and my dog and become a better teacher.”