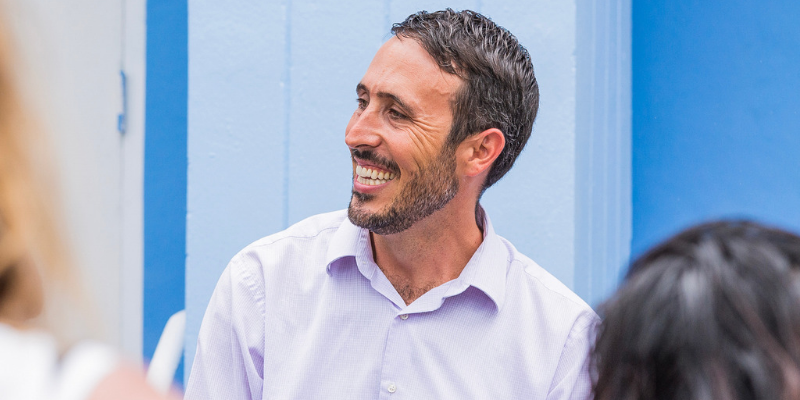 Moses Shumow was loved by his students and colleagues, a former student of his said. Courtesy of Florida International University

Updated 10/24/19: This article was updated to include information about a memorial service for Shumow

Florida International University senior Bianca Marcof remembered sitting in her Intro to Digital Media class showing the professor memes they had made—one photoshopped the professor’s head onto videos of Travis Scott at the 2019 Super Bowl LIII.

“At first [the professor] was nervous because he thought we were making fun of him,” Marcof said in a phone interview from Miami. “But then he thought it was great, he loved it.”

Marcof, a junior at the time, said their class became like a family—students even made a group chat where they talked everyday and created more memes of the professor. The professor left after the spring 2019 semester to begin teaching at a college in Boston in the fall.

For the last day of class, the students presented the professor with a letter signed by all of them and a Build-A-Bear Workshop stuffed animal clad in Star Wars gear for his son who has struggled with medical issues since 2017.

Moses Shumow began to cry at the gifts.

Shumow, 42, moved to Boston before Emerson’s fall 2019 semester with his wife and three children after nine years of teaching at FIU. He died on Tuesday after an outbound Commuter Rail train struck him around 8:20 a.m. in Beverly while he was riding his bike through a pedestrian cut through. Transit Police Officers are still investigating the incident. At the time of his death, he was teaching one course at the college, Editing and Web Producing.

“I really just think he had a way of getting to his students,” Marcof said. “He was a very engaging teacher—and that’s very rare to find. But he also had a way of inserting his personal life, and because he was so nice and the type of person who would be there for you when you needed him, I believe people could resonate with him and really feel for him.”

President M. Lee Pelton confirmed Shumow’s death in a phone call with The Beacon early Tuesday afternoon and announced it to the community in an email at 5 p.m. His death comes less than a month after the death of sophomore Daniel Hollis, who was killed after an altercation in Brighton on Sept. 28.

A memorial service is planned for Oct. 27 at 2 p.m. at 221 Cabot Street in Beverly according to an email sent to the Emerson community on Thursday by the college. Rev. Julie Flowers and Rabbi Alison Adler will preside over the service at The First Baptist Church, a non-denominational church.

“I think folks are still in a bit of shock, and I think they’re just fatigued from dealing with this kind of loss,” Vice President and Dean of Campus Life James Hoppe said in a phone interview in regards to the two recent deaths. “I think it’s when the importance of community becomes more essential, and it’s important to know that we have a strong community here and hopefully that can help … carry folks through these tough times.”

Shumow and fellow journalism professor Stephen Iandoli took over as co-advisors for WEBN at the beginning of the fall 2019 semester following the removal of professor Marsha Della-Giustina. He served as a graduate assistant for Della-Giustina in 2000 and 2001.

“He had a calming presence,” the junior said in an interview. “He was always positive, always happy, and even from the start he would push us hard, but it was a positive push.”

WEBN plans to suspend all its shows for the remainder of the week.

Joel Delgado had Shumow as a professor in 2012 at FIU and said the teacher’s passion made him extraordinary.

“He just brought life to the classroom,” Delgado said in a phone interview from Nashville. “He was so energetic and had one of those smiles that could just light up a room. He was so optimistic and passionate about teaching and it really showed. Being in a classroom with him just really made you want to learn more and made you excited about learning and storytelling.”

Janet Kolodzy, chair of the Journalism Department, said she learned of the incident Tuesday morning and informed journalism faculty as soon as possible.

“He was always one of those people who, if he was given a challenge, figured out ways to make it good and right,” Kolodzy said in an interview. “Having him here was an opportunity to have that attitude continue to enhance the great stuff that is already going on in the journalism faculty.”

FIU emailed the student body at 4:44 p.m. on Wednesday to notify them of Shumow’s death, according to Marcof.

“We are deeply saddened by the sudden and tragic passing of our friend and colleague Dr. Moses Shumow,” Dean of the College of Communication, Architecture, and the Arts Brian Schriner wrote in an emailed statement to The Beacon. “Moses was loved and respected by all who knew him. He was kind and caring, and he made a tremendous difference in the lives of his students, colleagues, and community. Our deepest sympathies to his wife and family.”

“For those of you who know him, I know your hearts are broken. For those of you who didn’t, we are still deeply saddened nevertheless,” he said. “This is a devastating event to happen to someone who wanted to be here, who is an Emerson alum, whose promise in his area is just enormous. To have that promise cut short in this particular way on a Tuesday morning is really remarkable.”

Shumow was loved by his students and colleagues, Marcof said. A quick social media search would show the endless support for him.