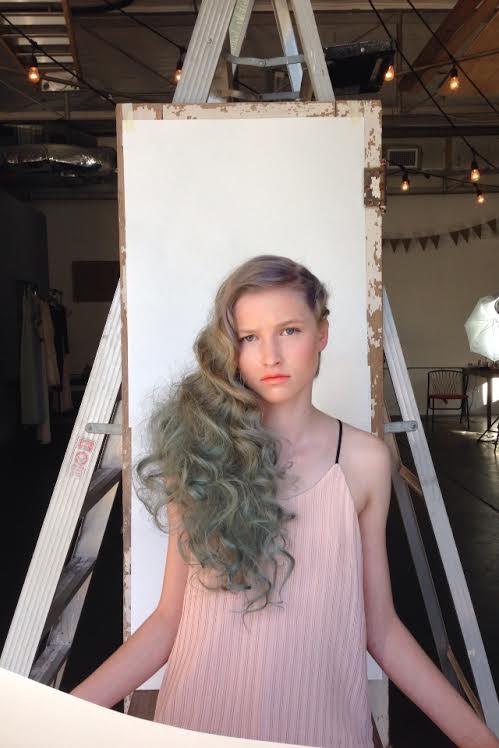 Posed like a dancer, Albany Alexander thought her photo shoot was nothing more than fun with her friend and professional photographer, Jeannie Albers. The freshman journalism student didn’t know Albers planned to submit the photos anywhere. It shocked her a month later when Alexander sat in class and received a text from Albers saying their photo was published on the Vogue Italia website.

“I felt like butterflies came up in my stomach, but not the kind of butterflies that kind of hurt when you’re nervous,” Alexander said. “The ones that make you feel like you’re floating.”

Her face on Vogue Italia was the break in her modeling career that Alexander never saw coming.

“She [Albers] never told me she was submitting it for anything. I thought we were just doing that for fun and to get some more images for each other’s portfolio,” Alexander said.

Albers said Alexander reached out over winter break and asked if they could collaborate for a shoot.

“I said, ‘Of course,’ because [Alexander is] still my favorite model to photograph,” Albers said.

Leaning on an old-fashioned wooden chair and draped in a pink bodysuit, Alexander stands with one foot pointed in the photo on the Vogue Italia website.

“Conveniently, I ended up pulling all these looks that kind of had a little bit of a ballerina feel to them,” Albers said. “They were all body suits that were layered.”

Albers said the photos turned out strong, beautiful, and different—so she decided to submit the images to Vogue Italia. The magazine’s open publication platform “PhotoVogue” allows photographers to submit work to be reviewed and curated by Vogue Italia editors.

“I didn’t have high expectations. I was just like, ‘You know what? These are good photos, Albany looks amazing, and they would probably love her,’” Albers said.

Both Albers and Alexander had never before been published in Vogue Italia.

Last week, Alexander went to New York Fashion Week casting. She tried on over 50 outfits for fashion designer Bibhu Mohapatra in a process called “Looks,” an exercise designers use to determine their runway catalog.

“I got to put on the most beautiful gowns. Some of the gowns I was trying on at Looks were like ten, twenty-thousand [dollar] dresses, and that’s nothing I would ever wear otherwise, obviously,” Alexander said.

After trying on dresses and walking for Mohapatra, Alexander said the designer offered her first option to walk in his show last Friday. The position meant she’s expected to save the date and not book with other designers because the designer will probably sign her, but doesn’t guarantee she’ll walk. Alexander did not book the show.

“[Alexander] has the ability to take direction that you give her, and she just interprets it and gives a lot of opportunities for beautiful angles and, in the end, beautiful photographs,” Albers said.

Alexander said she knows that there are negatives to the job. She said the industry can be a lot of fun, but demands hard work and can make her feel lonely.

“I have friends in the industry, but it’s not like this community of people who [are] going to help you out all the time,” she said. “It’s like, ‘You’re on your own, kid,’ and I don’t want that to be my whole life.”

Alexander had to choose between living life as a full-time model or becoming a regular college student. She decided to focus on her journalism education.

Alexander’s father, Paul Alexander, said she always put her education first. Although he said she chose to focus on school, he and his wife believe their advice to always consider the future swayed her to choose a college career.

“I played baseball in high school, my wife played softball and soccer, and you know those things aren’t a part of our life anymore,” he said. “So helping our kids understand that although sports and modeling are fun, you’ve got to decide what you really want your career to be.”

Although Alexander juggles both volleyball and modeling, she tries not to overcommit and continues to study hard. Alexander said she’s aware she may have left some big opportunities on the table in the modeling industry, but she is happy to pursue a path of which she is more passionate.