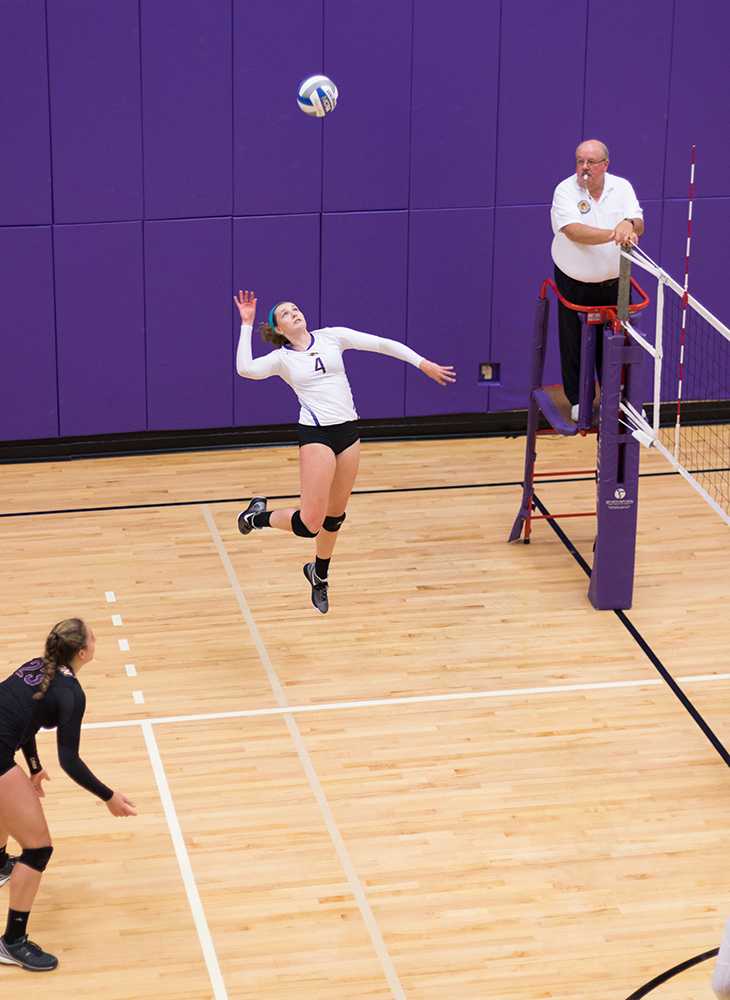 Most freshmen athletes face a learning curve on a new team. Grace Tepper has not only been the star of the women’s volleyball team, but has already asserted herself in a way uncommon among newcomers.

Tepper grew up in Kensington, Maryland, about 10 miles north of Washington D.C., where she attended Bethesda-Chevy Chase High School. She was on the varsity volleyball team for 3 1/2  years and a captain in her last two. She also played for the Maryland Juniors VBC Elite Black Volleyball club team.

Tepper’s comfort in a leadership role, even without the title of a captain, has been on display throughout the season. Junior captain Moira Brennan praised Tepper for her attitude and spirit as a young member of the squad.

“We played Babson the other day, and there was a point when we were all down and she would come up and bounce around right in your face and try and get you all amped up,” Brennan said. “I think that takes a lot of courage, especially as a freshman, to have that confidence and to be a leader.”

Tepper leads the Lions in kills and points. She is also tied for fourth in the NEWMAC in kills, and is fourth in the conference in points.

Head coach Ben Read attributed much of Tepper’s early success to her experience and the competition she faced before attending Emerson.

“She’s been playing for a long time at a high level in high school and in club,” Read said. “She’s played against better kids than we’re seeing in competition now.”

The team’s other captain, junior Fara Cohen, said Tepper’s work ethic and leadership make her stand out on the team.

“I think she’s someone who leads by example,” Cohen said. “She just comes into the gym and works hard day in and day out and I think that speaks for itself. Her actions really show her character.”

Tepper, a journalism major, said Emerson’s top ranking in the program influenced her decision on which college to attend back in the spring. She said her experience with the team during her visit was also a key part in her choice.

“I knew right away that I really loved the team, and their spirit on the court was something that I was in awe of,” Tepper said. “I saw a school that had the best opportunities for me in the field that I was interested in, and it’s such a great team that I really felt connected with. I knew it was the right school.”

Cohen said Tepper’s passion on every play has made her a special player for this team.

“She’ll never give up on a ball,” Cohen said. “She’s going to run it down, she’s always like a little penguin out there sliding, and won’t stop until that ball hits the ground.”

That desire and drive to succeed can also be seen off the court, where her interests include science, fiction, and literature. As she looks towards the future, Tepper has her eyes set on a career in writing.

“I’d like to write. I think it’d be interesting to write just in general about the tech industry,” she said. “That’s something I’m interested in, like Silicon Valley and Elon Musk and all that stuff is really fascinating. Since that’s going to play such a big role in developing technologies, I think it’s important that people are reporting on that.”

Over the past few games, Tepper’s numbers have cooled off, particularly in kills and points. Read said that since opponents now have had the opportunity to scout her, teams have been more effective in slowing her down.

Nonetheless, the coach is unwavering in his stance on Tepper’s role on the court.

“We needed someone to step up to be the go-to player, and from the first tournament this year, she’s been that person for us,” Read said.

The women’s volleyball team’s next game is Thursday at Emmanuel College, at 7 p.m.