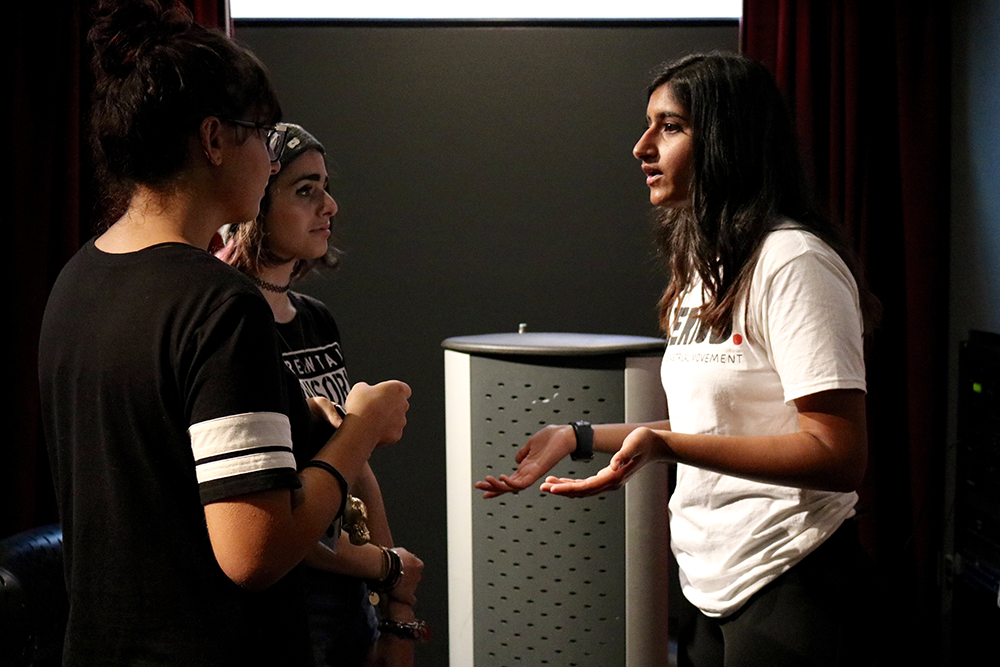 With over 100 high school, university, and community chapters established around the world, PERIOD is the largest and fastest growing youth-run nongovernmental organization in menstrual health in the United States. Thanks to freshman communication studies major Arasha Lalani, Emerson now has a chapter of its own.

“We want to encourage the conversation surrounding periods,” Lalani said. “What we do is provide menstrual products to homeless people and to those in need who can’t afford them.”

Lalani is one of six members on the PERIOD national executive team and serves as the northeast regional program director. Although she just started officially working with PERIOD this past summer, Lalani has been an advocate for the cause for around two years.

“I was captain of the speech and debate team in high school, and my speech senior year was about how we should talk more about periods,” Lalani said. “In it, I talked about PERIOD and said, ‘This is an organization, donate to it, reach out to it, learn more about it.’”

Lalani performed the speech at several competitions last year and took home first place in original oratory at both the Glenbrooks National Tournament in Illinois and the National Individual Events Tournament of Champions in Missouri. Inspired by the contents of her speech and the research behind it, she started a drive at her school collecting menstrual hygiene products.

“I reached out to Nadya [Okamoto, who founded PERIOD] and let her know that I was going to be a part of this movement and that I was going to donate all the products that I raised in my drive to the various shelters that PERIOD partners with,” Lalani said.

She also sent a video of her speech to the PERIOD team, which resulted in Okamoto offering her a job. Lalani said that while it was very unexpected, she is glad that things happened the way they did.

“This experience has been super eye-opening, and I came to the conclusion that menstrual health is something that people do care about, they just don’t actively realize it,” she said. “So that’s what I want to do to make sure that it’s consciously there and they’re always aware of it.”

Nadya Okamoto, a Harvard College sophomore, founded PERIOD in 2014 after being inspired by an experience that left her family legally homeless for some time. At the age of 16, she quickly became aware of the issues surrounding menstrual health.

“I had lots of conversations with women in much worse living situations than I was who literally had to use cardboard, socks, paper grocery bags, toilet paper to maintain their periods,” Okamoto said. “I became obsessed with the issue of periods and fell in love with the movement and saw an opportunity to engage young people.”

At the Emerson chapter’s first meeting last Friday, Lalani gave a presentation and introduced a drive to support victims of hurricanes Harvey and Irma. The drive will go from Sept. 18 through Oct. 16, and is focused on collecting pads, tampons, and panty liners. The new chapter also hopes to achieve enactment of a campus policy providing free menstrual products in all campus restrooms.

After attending the meeting, freshmen performing arts majors Elizabeth Pine and Matt Miller said they were interested in joining the menstrual movement.

“This is a cause that I believe in that I didn’t know there was an outlet for,” Pine said. “Young people have a lot of energy and a lot of passion, and it’s good to be able to channel it into something productive that we can actually create change through.”

Miller said that while he wasn’t particularly aware of the cause, he is excited to get involved.

“[PERIOD] gets a lot of attention, and it should, because it affects half of our population,” Miller said. “It’s exciting to be part of something that’s still relatively new, and sort of help it to get off the ground, especially here at Emerson, which I think is the perfect place for it to really thrive.”

Chapter meetings are open to anyone and will be held on a monthly basis, with the next one being on Friday, Oct. 13.