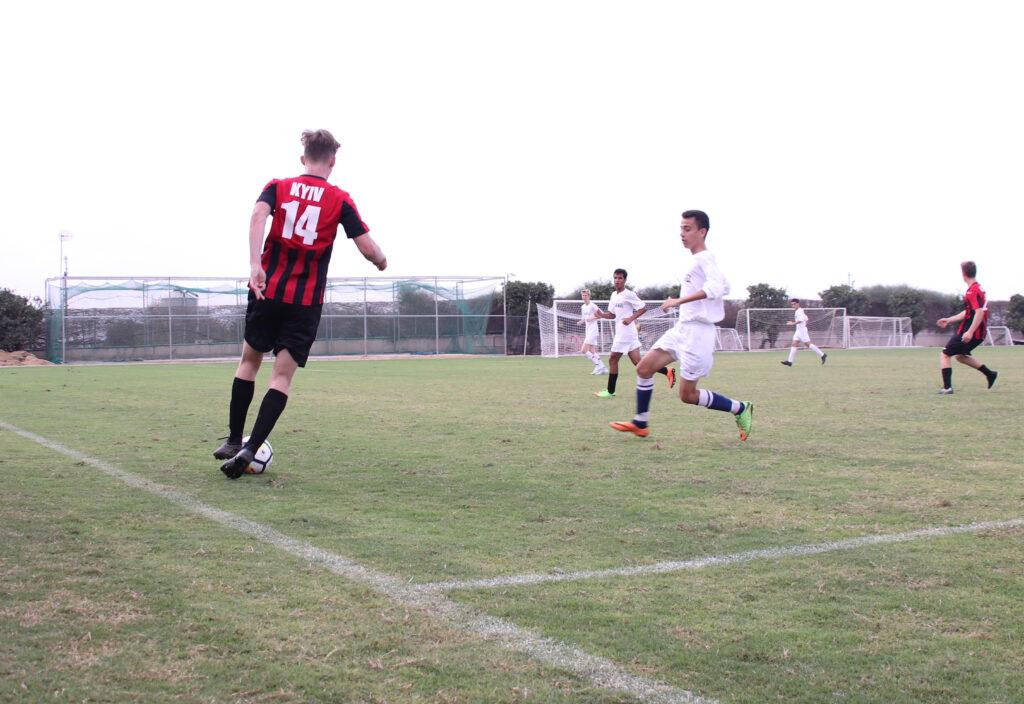 Freshman Bo Feekins (left, No. 14) played in nine games this season and totals one assist. Courtesy of Bo Feekins.

After spending seven years of his life in Ukraine, Bo Feekins decided to spend his next four as a member of the Emerson College men’s soccer team, where he is adjusting to life in the United States as a college athlete.

“Everyone is super welcoming, which is super nice, especially on the soccer team,” Feekins said in an interview. “When I lived in Ukraine, the big difference was that I was the foreigner, I was the outsider. Coming back here, it’s definitely a different life and a different perspective.”

While Feekins is a dual citizen of the United States and the United Kingdom, he lived in Ukraine because his parents worked there. He said he wanted to play college soccer in Boston due to his family connections in the area.

“My mom, she’s American,” Feekins said. “She’s originally from Massachusetts, so I’ve got family all over the area. I have an aunt and uncle that live in Boston, so I was looking at schools around Boston to be close to them.”

Feekins searched for a school to help him meet his athletic goals and pursue a sports communication degree.

Before stepping foot on campus, the Lions’ coaching staff had never seen him play in person. Head coach Bryan Harkin said the staff relied on film and the testimonies of other coaches when evaluating Feekins.

“He was very diligent in following up with us,” Harkin said. “It’s hard to get to see international players play live, but on the phone he handled himself very well. He knew what he wanted to do.”

After the evaluations by the coaching staff, Harkin invited Feekins to a training camp this summer. Harkin said Feekins’ performance earned him an invite for more of preseason training and eventually a spot on the roster.

Due to injuries on the Lions’ defense, Feekins received playing time early in the season. Feekins played center back for the first nine games of the season and assisted on a goal by sophomore forward Clark Dean against the University of Massachusetts Boston on Sept. 10.

Harkin said one of Feekins’ strengths on the field is his versatility.

“He can also play as a defensive [midfielder],” said Harkin. “He’s good on the ball, he’s got good instincts, and he’s got a good feel for the game.”

While searching for center backs for the 2019 recruiting class, Harkin identified Feekins as someone who could fill that void.

“He’s certainly on the verge of maybe starting or getting significant minutes,” Harkin said. “He’s a big frame, a big body, and he can deal with the physicality and the speed of the game. You can see signs that he’s developing in training, and now he can bring that over into games.”

Harkin also said Feekins shows a commitment to improving his game during training.

“He’s coachable,” Harkin said. “That’s fundamental as a coach, if you’ve got a player that wants to listen and is willing to do that extra work and go those extra yards. We’re very pleased in terms of that.”

In addition to his skills on the field, Harkin believes Feekins’ maturity makes him a good fit on the team.

As the team continues conference play with a 2-6-1 record, Feekins said the team’s mentality remains unwavered. He thinks the team will begin to see more success on the field.

“We have the talent,” Feekins said. “We know we’ve got the work ethic. It’s just about taking that next step and improving the little things. I think we’re close. We have a talented group. We work hard, we play for each other. The next big thing is just turning all that hard work and talent into results.”