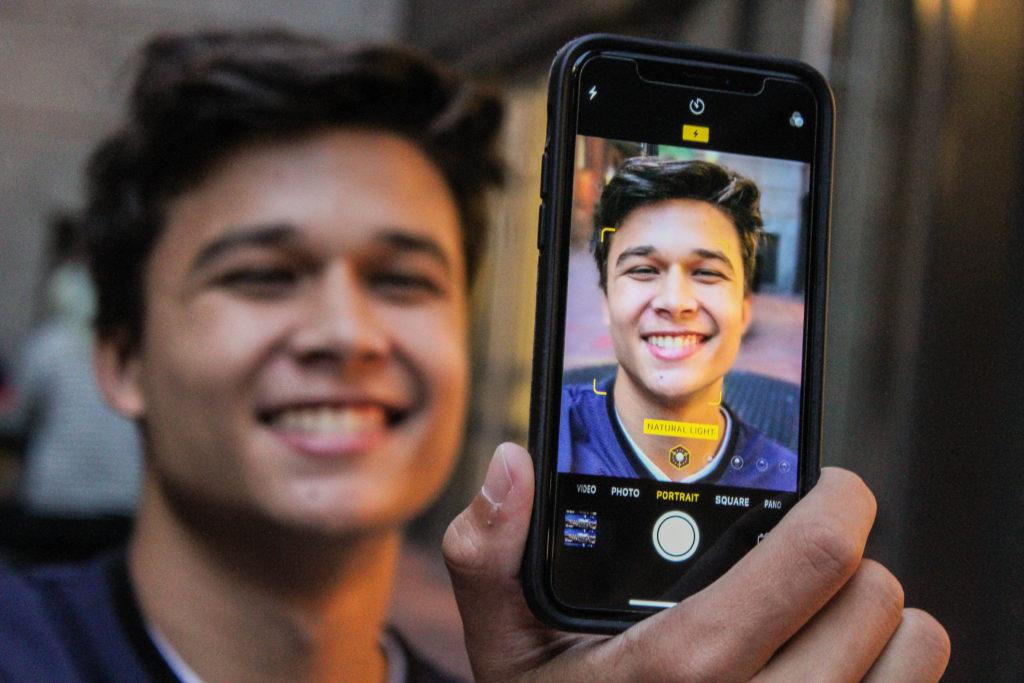 Freshman Jay Zimmer had over 120,000 followers on Vine, and has over 18,000 on Instagram. Anissa Gardizy/Beacon Correspondent

Freshman Jay Zimmer had over 120,000 followers and 90 million loops on Vine, an app that allowed users to post six-second videos. Now, he posts sketch comedy videos on YouTube and Instagram, with roughly 15,000 views per post on the latter.

The visual and media arts major’s popularity stemmed from a vine recreation posted in April 2015. “IB: Victor Pope Jr.,” originally posted by Vine star Victor Pope Jr,  features a cashier asking a robber if he has a rewards card.

Zimmer said his fame took off when he gained nearly 1,000 followers from Pope re-posting the vine.

“I started seeking out a larger audience when I realized all of my friends and I were building a platform for ourselves,” Zimmer said. “I knew that we could do something impactful.”

Zimmer said Vine’s 2017 termination helped him grow the fanbase he established on the app, forcing him to expand to other platforms and change his content.

“Ultimately, I was only mad at Twitter for causing the death of Vine,” Zimmer said. “I had a good relationship with the Vine staff, and they did their best towards the end to better accommodate their creators.”

Zimmer said he comes up with content for YouTube and Instagram by using puns or writing down interesting things he sees or hears in a notebook.

“If there is a joke I am super confident about, I will write a script and build it from there,” Zimmer said.

Zimmer met one of his close friends, Miles Hampton, through a group chat of Vine creators. Hampton currently has 130,000 followers on Instagram. Hampton said they would text about their ideas and FaceTime constantly, though they did not meet in person until about two years ago.

“I don’t know anybody who is as clever with his jokes and delivery as Jay is,” Hampton said. “Jay is a straight-up genius.”

Sophomore Grace Tepper has known Zimmer since her senior year at Bethesda Chevy-Chase High School in Bethesda, Maryland. Tepper said she knew Zimmer before his rise to fame in the digital world and said his presence on Vine captured his personality well.

“Jay is not only a fun guy to be around,” Tepper said, “he is a hard worker and his sketch comedy videos reflect that.”

Zimmer said he never sought fame on Vine, but wanted to release funny content. He said he found it comforting when his audience could relate to him about personal issues, like when he came out as gay over social media in September 2017.

“People really open up to me, and that is a responsibility I choose to bear with,” Zimmer said.

“I only hope that more closeted men and women can one day find the right environment and work up the courage to express themselves freely with a loving support system around them too,” Zimmer wrote in the Instagram caption.

“This is so cute! And so inspirational! Thank you for being a new voice in the community and being true to who you are,” wrote fan Dominic Tran-Le in a comment.

Hampton said Zimmer has done a lot for the LGBTQ+ community, and it shows Zimmer’s genuine character.

“Jay is intelligent, spontaneous, and authentic,” Hampton said. “He really cares about the people around him.”

In the future, Zimmer said he hopes to continue writing and producing sketch comedy.

“The best part of making sketch comedy is coming up with the scripts,” Zimmer said.