Freshman fundraises to run Boston Marathon for brother with cancer 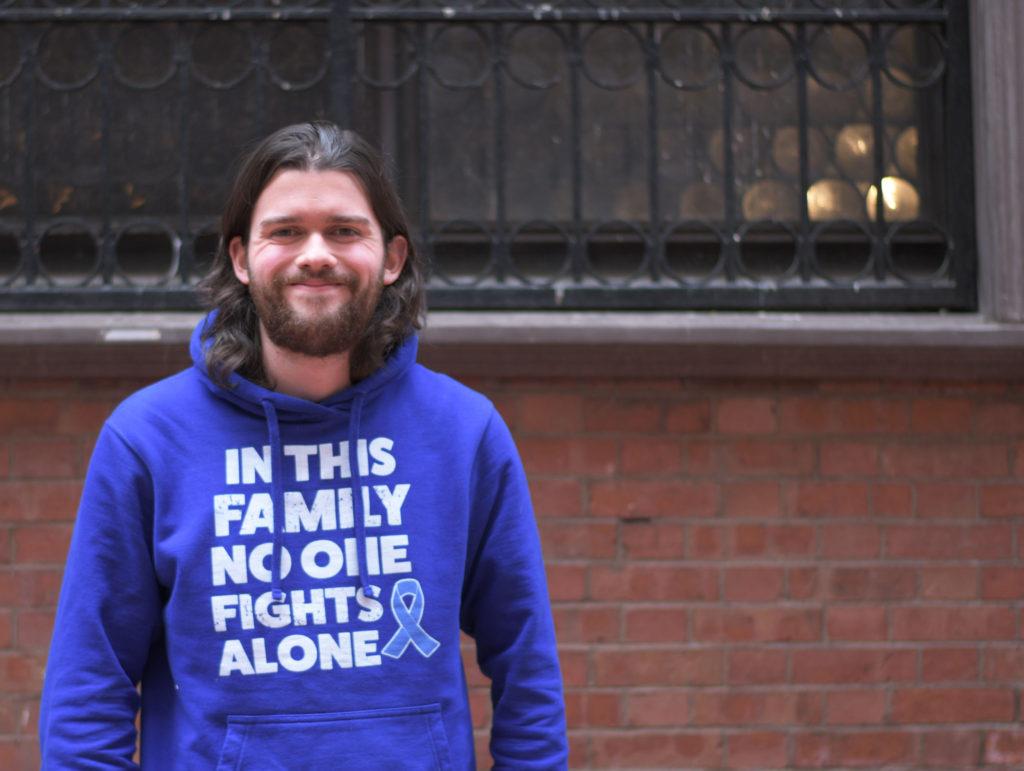 Brendan has raised over $10,000 for the Cam Neely Foundation, a foundation that helps provide support for cancer patients and their families. Photo by Anna Moon / Beacon Correspondent

Freshman Brendan Beauregard will never forget how he spent the day on Sept. 15, 2017. Sitting in the living room of his family home in Medfield, Mass. texting his friends, he received a life-changing phone call from his mother. She told him he needed to come to Tufts Medical Center as soon as possible—his older brother, Pat, had been diagnosed with cancer.

“I just remember my entire world stopping,” Brendan said. “Everything just froze around me, and I collapsed down onto my chair—the shock of hearing that news, and with someone like Pat, who I consider [to be] my hero. If I grow up to be half the man he is, I’d consider that to be a major accomplishment for myself.”

Brendan’s older brother Pat is a 30-year-old corporal in the Marine Corps and has stage IV colon cancer. Since his diagnosis in October 2017—two months after his wedding—he has undergone surgeries, biopsies, scans, and 30 rounds of chemotherapy.

After Pat’s diagnosis, Brendan and his family participated in a 5K run in Boston called Get Your Rear in Gear in an effort to raise money for colon cancer research. After completing the run, Brendan directed his attention to an even bigger goal—running the Boston Marathon. Brendan said he wanted to make a difference for families impacted by cancer like his.

“It all started from seeing my brother fight his cancer battle,” Brendan said. “Meeting all the people I’ve met, whether it’s at the hospital he gets treatment from or other people that he’s gotten to know, and just hearing everyone’s stories inspired me to do something more for every family that has a cancer battle.”

At 19, Brendan is the youngest of his four siblings. Despite the age difference, Brendan said he considers his older siblings to be his best friends. They talk almost every day and watch their favorite Boston sports teams together and, according to Brendan, one of his favorite memories with Pat was attending a New England Patriots playoff game as a present for Pat’s wedding.

“We had so much fun. It was just me and him at the game, and we had pretty good seats too,” Brendan said. “They didn’t play the best of games, but they did win. A couple months after that was his wedding, which was just a lot of fun.”

Brendan said the reaction from friends and family to his decision to run the Boston Marathon was overwhelming.

“I’ve even been told I’m people’s hero, which, to be honest, is crazy,” Brendan said. “I’m just a 19-year-old kid in college. I feel like I really haven’t done anything yet, and people are still calling me an inspiration.”

Brendan’s roommate, sophomore David Kemp, said Brendan’s drive and humility allow him to focus on helping those with cancer.

”He doesn’t feel like he’s doing anything awesome—he really just sees it as himself wanting to make the world a better place and wanting to find a cure for cancer,” Kemp said. “He doesn’t care about any of the pats on the back he’s getting. He’s just so driven on helping his brother and anyone with the disease.”

Pat said he was surprised when Brendan told him he wanted to run the marathon, since Brendan has no prior experience with long-distance running.

“I was a little surprised when he told me he first wanted to do it,” Pat said. “He [works] out, but long-distance running is never something he’s done.”

Brendan began his training after the 5K run, most recently completing the length of half a marathon as part of his preparation. Despite Brendan living in Boston, he does most of his training in his hometown Brendan said the hardest part about preparing for the marathon has been hill and elevation training.

“Those are just monsters,” Brendan said. “Heartbreak Hill [in Boston] is a different beast on its own, but I have this one hill back in my hometown—Hospital Hill—and that alone gets me good after my runs.”

To participate in the Boston Marathon, runners can either qualify by finishing a marathon arranged by age within a certain time or by participating in a charity team, according to the Boston Athletic Association. Brendan joined the marathon team for a non profit called the Cam Neely Foundation for Cancer Care that helps provide support and resources for cancer patients and their families. By joining the team, Brendan had to raise $10,000 before April 15 to earn his bib for the marathon.

Brendan raised money through a CrowdRise page and by selling T-shirts with sayings from his brother on his own website. Pat said Brendan met his goal the week of Jan. 27 after starting his fundraising only two months ago. Kemp also helped Brendan promote his website on his Instagram page. At the time of publication, Brendan fundraised $10,085.

Pat said he admires Brendan’s devotion to fundraising and training.

“He’s extremely dedicated, and you can see it with his fundraising and his marathon training. When he sets his mind to something, he’s going to achieve it 100 percent,” Pat said. “He texted me the other day and said, ‘$10,000 is a good starting point, but I want to continue and raise more and more. I can’t just be satisfied with hitting my goal.’”

Pat said Brendan embarking on this journey makes him proud, and he hopes to stand alongside the finish line to cheer him on.

“I’m extremely proud of him for doing something he’s never done before,” Pat said. “It’s probably out of his comfort zone, so I absolutely applaud him and commend him for doing this.”