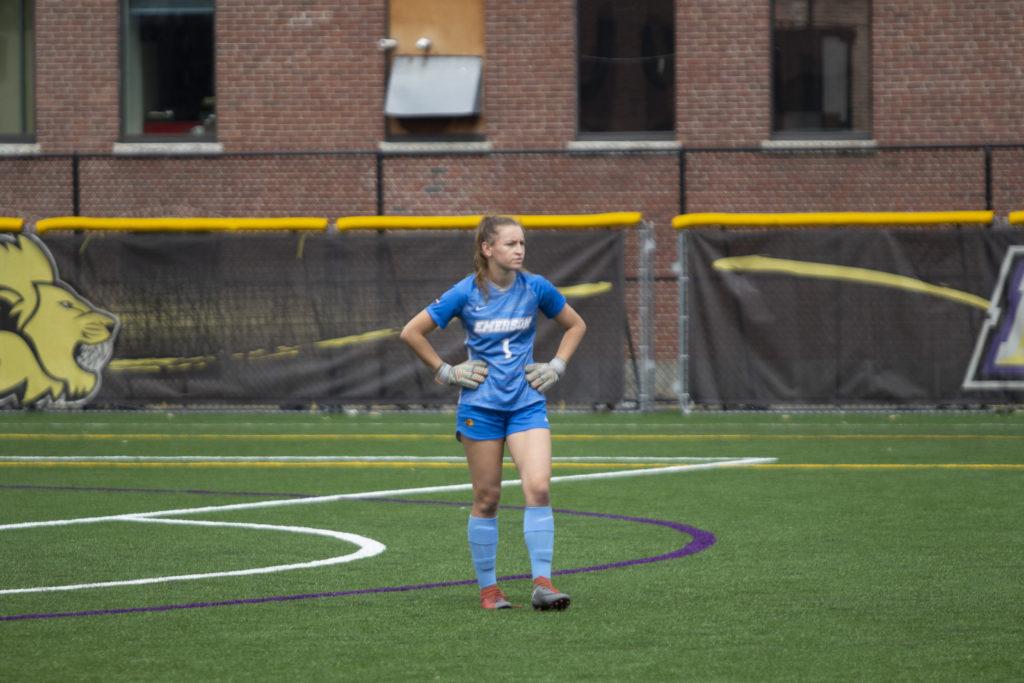 Rose is third in the NEWMAC in saves with 88. Photo by Kyle Bray / Beacon Staff

Rose lifted the Lions to a 1-0-1 record over the past week with a 2-1 win over Wheaton College and a 1-1 draw against Wellesley College. Against Wheaton, Rose made four saves from five shot attempts. With Wellesley, Rose made five saves from six shot attempts in a double-overtime draw.

In the previous week, Rose helped the Lions to a 1-1 record of which she made 23 total saves across two games. The Lions defeated Smith College 2-1 but lost to Worchester Polytechnic Institute 3-1.

Head coach David Suvak praised Rose’s performance this season and explained her importance to the team.

“Megan is an excellent athlete and an excellent goalkeeper for this team and for this college. She helped us win a couple of big matches,” Suvak said. “Her role with the team as a leader and starting out of the back has been super important to this team, especially given our circumstances last year where we didn’t have a real goalkeeper. It’s very refreshing this year.”

Rose said she’s embraced the leadership role this season and understands that as the starting goalkeeper for the team, communication is crucial to keep the team together.

“Especially as a goalkeeper, they’re supposed to be a leader on the field, so it definitely was a bit of a challenge to come in and tell seniors what to do. It went a lot smoother than I had expected—they’re super supportive and they listen to me super easily,” Rose said. “As a vocal leader I just want to bring a lot of communication. I think that’s just a super important part of the game.”

Rose led the Lions to a 9-5-1 record so far this season. In 14 games played she totaled 88 saves, ranking her third in the conference.

Rose said she believes the team’s future is bright and hopes the team can assert itself as a tough one to beat.

“Just seeing the growth over this season has been insane, and it’s really been awesome to see individually and as a team, we’re growing together so well. I’m super excited for our next season to just continue to grow and assert our spot in the NEWMAC,” Rose said. “I think that, this season, we’ve proven ourselves to be a tough team to beat.”

Rose is the first Emerson player this year to win back-to-back awards in the NEWMAC. Freshman goalkeeper Sophia Giordano also won the same award the prior week, marking the third consecutive week an Emerson goalkeeper has won the award.