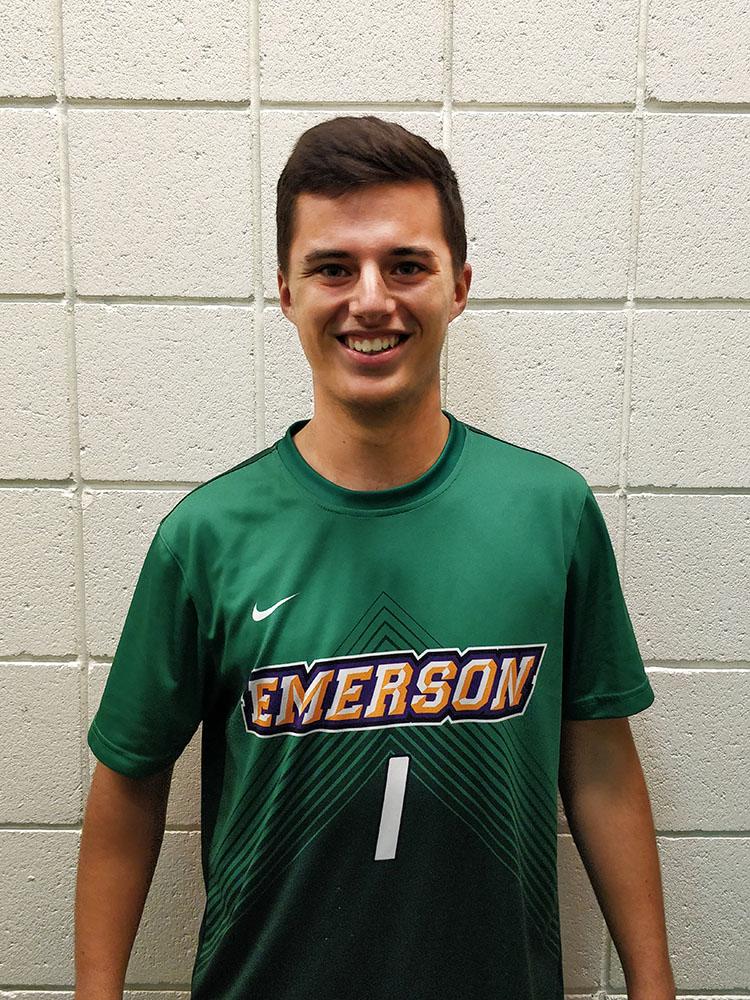 While most players’ first game is an enjoyable moment, freshman goalkeeper David Kemp got a baptism by fire.

With three seconds left in regulation of Emerson’s men’s soccer season opener against Curry on Sept. 1, starting senior goalkeeper Lucas Fischer suffered a concussion after colliding with a Curry attacker, and was forced to leave the game. With both teams locked at zero and overtime imminent, head coach Brian Harkin called on Kemp to make his college debut.

“To be honest I wasn’t even looking at the game, I was turning around getting people’s drinks ready because the full-time whistle was about to go, and I turn around and coach is going ‘David. Warm up,’” Kemp said.

Kemp survived his chaotic first appearance, making one save and preserving the shutout as the Lions went on to tie Curry 0-0. With Fischer out of play, Kemp was promoted to the starting job. The Lions went 2-2-0 and Kemp recorded 11 saves as the number one.

Fischer has since reclaimed his starting position after returning from injury. He said his temporary replacement is one of the most technically sound goalkeepers he knows.

“Great feet, great hands, and I see a lot of potential in him,” Fischer said.

“He came in well-taught already,” Connolly said. “His catching technique is fantastic and he reads the game well and plays well with his feet. There wasn’t a whole lot I had to improve on right from the start.”

Kemp said the way he prepares for his starts is slightly unorthodox.

“I like to get relaxed,” Kemp said. “I know it’s different for everyone, a lot of people like to get in the zone, listen to music, get pumped up, but I play best when I’m happy and I’m relaxed and when I’m not stressed out, so I usually don’t listen to music and I just talk to people.”

Kemp is from London, and grew up supporting West Ham United, which is in 17th place in the Premier League, the top division of English Soccer.

Green famously let a long shot from USA striker Clint Dempsey bounce out of his hands and into the goal, tying the hotly contested game between England and the United States at one during the 2010 World Cup. The error ended up costing him his starting job for England.

“When I was growing up he was West Ham’s keeper, England’s number one. Despite that one error, he’s been my idol forever,” Kemp said.

Kemp said he has fallen in love with Boston since migrating across the Atlantic. Although he has not had much time to explore the city due to his practice schedule, he said he plans to go out with his teammates more once the season is over.

“I know a few of us are trying to have like a tourism Monday type thing when on Monday evening we go out and try and look at different parts of the city,” Kemp said.

While he hasn’t been to any sports games yet, he said he desperately wants to go see the Red Sox, as he has never been to a baseball game before.

While Kemp has not yet chosen a major, he said he is deciding between either visual and media arts or marketing communication. He said he always wanted to come to the United States, and felt that Emerson was the perfect place for him.

Prior to his time here, Kemp played for various Sunday league teams and with a few academy setups, but never for more than six months at a time.

“There was one time when I had one of the worst games for a team, like we lost 5-0, it sucked but I played quite well,” Kemp said. “I come off, head down, and then some guy in a Norwich City tracksuit comes over and says to me, ‘Your team sucks, but you’re quite good,’ and then they offered me a trial.”

While Kemp is returning to the second spot on the depth chart, he has made a lasting impression on Connolly.

“Obviously we’ll bring in other recruits, but going forward he’ll certainly have a shot at that starting position for the next few years,” Connolly said.

The Lions’ next game is on Saturday Sept. 23 at 1 p.m. against Coast Guard, at Rotch Field.