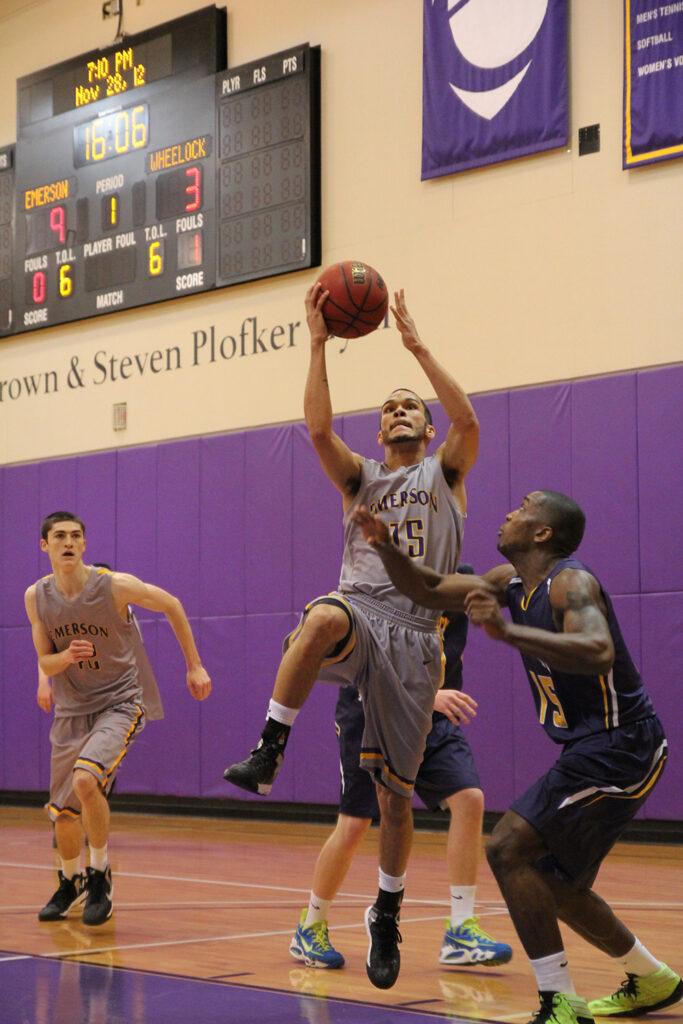 Freshman men’s basketball player Michael Thorpe may be new to Emerson, but there is always one constant at every game: his mom, the point guard’s biggest fan.

“I was raised by a single mother, and throughout my life, she’s always been there for me,” said Thorpe, a writing, literature, and publishing major. “She travels everywhere to see me play, so I’m very loyal to her.”Staying close to his Newton, Mass. home was a key incentive for Thorpe as he joined the Lion’s this year. Head Coach Jim O’Brien said he recognized the freshman’s close relationship with his mother during the year long recruitment process. “He’s very loyal to his mother, very close to his mother,” said O’Brien.Continuing to transition the men’s basketball team under his reign, O’Brien said he sees Thorpe emerging as a building block for the program. A three-time Bay State All-Star at Newton North High School, Thorpe scored over 1,000 points in his three seasons at the school, and his team lost only one home game over during his time there. In his senior year, Thorpe was honored as a member of The Boston Globe and The Boston Herald All-Scholastic teams, as well as being awarded The Bay State Most Valuable Player.“He’s a great kid to coach, said Paul Connolly, Thorpe’s coach at Newton North .  “He just embodies what you look for in a student athlete.”Connolly was assistant coach for Emerson’s men’s basketball team from 1996 to 2001. O’Brien and his staff identified Thorpe as a target player late in his junior year and recruited him throughout his senior season as well. “He was right at the head of the list as far as the recruiting went, so we were thrilled when he said he wanted to come here,” O’Brien said.Thorpe impressed his coach from the onset of the season, and has become a mainstay in the playing rotation, starting all fourteen games for the Lions this year.“He’s a very bright player, he really knows how to play, he’s good with the basketball, he’s got good quickness, he is an intelligent passer, and he can shoot the ball,” O’Brien said. “From day one, we envisioned Michael as being one of our better players and somebody that we could build our team around in the backcourt.”The short move from Newton to Emerson was comfortable for Thorpe, who said he was used to changing homes. He lived in Florida until he was 15-years-old, before moving to New Hampshire and then Newton. Thorpe said he welcomed the opportunity for his mother, who still lives in Newton, to see all his games without having to travel far.Thorpe is leading the Lions in scoring, currently averaging 12.1 points per game. The Lions have eleven total new players—including nine freshmen—on the roster this season.The Lions have won three of their last four games to pull their GNAC Conference record to 5-2, and are tied for third in the conference.  The team has also increased its scoring average significantly as Thorpe and his teammates have become more comfortable in offense. After averaging 59 points per game for their first six contests, the Lions have averaged 68.6 points per game over their last eight.Like many other new players, O’Brien believes Thorpe will continue to improve as he gets physically stronger and works on his shooting, decision-making, and defense.  “He’s a pretty good player, but like all freshman, there’s significant room for growth and improvement,” O’Brien said. Sophomore guard Mike Lucas is already noticing the strides Thorpe is making.  “He’s definitely stepped up as a true point guard,” Lucas said. “Early in the season he was shooting and scoring more, but now he’s taken on the role of distributer, getting our shooters and bigs the ball, which makes us better as a team.”While Thorpe, as a point guard, said he considers himself an extension of the coaching staff and tries to lead by example, O’Brien said he has been looking for even more leadership from Thorpe. “It’s kind of hard to ask him now, but I want him as he gets older to be a little bit more vocal,” O’Brien said. “I believe as he goes our team goes.”