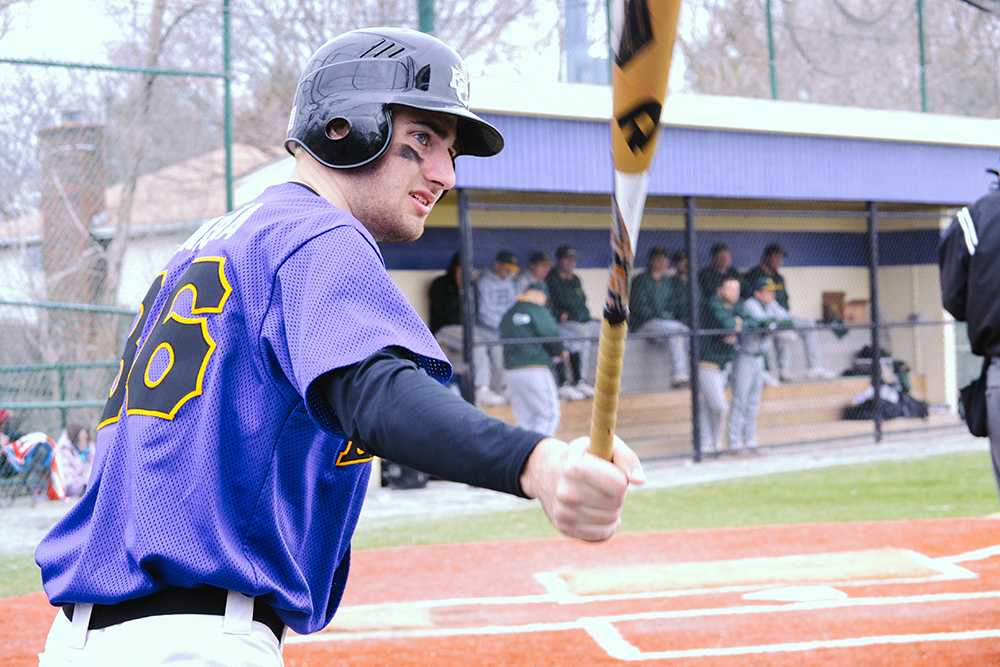 The Emerson College men’s baseball team completed its annual spring break trip to Fort Myers, Fla., and returned to Boston with a 2-7 record and a bounce in its step.

Emerson’s two victories now equal last year’s win total for the entire season, although both came against Northland College of Wisconsin, which is currently 1-8.

“I can think there were three or four games we could have won but let slip away,” said junior catcher Zach Dean, the team’s No. 3 hitter, who led the Lions last year in batting average (.345), on-base percentage (.450), slugging percentage (.500), and extra-base hits (11). “We’re not there yet, but, compared to last year, we’re light years ahead of where we were. The talent is there, it’s just about putting it all together.”

The Lions’ success was largely due to the top of the team’s batting order. Senior co-captains James Sullivan and Cal Ciarcia, freshman shortstop Mitch Moormann, and Dean all hit over .340 on the trip.

Ciarcia, the team’s cleanup hitter, led the charge by batting .451 and driving in nine runs to lead the team in both categories.

Dean posted a .346 batting average, hit one home run, and led the Lions with a .615 slugging percentage.

Head coach David Hanley, entering his 10th season in charge of the program he ushered from club to varsity status in 2007, said Moormann and his other four freshman all figure to play a significant role this year.

“It was disappointing wins-and-losses-wise [in Florida], but it was very good to get outside and get some experience for the younger guys,” Hanley said. “With 17 guys on the roster, everyone got playing time, especially the freshmen who all started at one point or another.”

Down in Fort Myers, it was first-year southpaw Cal Laird who led the Lions in innings pitched.

“They’re the heart of the team,” Hanley said of his newcomers, mentioning that Laird went seven innings to pick up the Lions’ first win of the season. Laird has tossed 13 innings so far.

Kyle Becker, Connor Damiano and Clint Fontanella appeared in all nine games so far, while Laird has gone deep into the game in both his starts.

“They all bring a great attitude,” said Sullivan, Emerson’s leadoff hitter. “They want to fight for one another, and even though they’re young, and they’re only freshman, their attitudes are rubbing off on the rest of the team. We’re all pulling for one another.”

Hanley said the attitude adjustment has been true across the board, and that he’s also been impressed with how his captains have embraced their new, prominent roles.

“Last year we were lacking some senior leadership,” Hanley said. “Everyone’s got high expectations of themselves and of the team. If you compare that to last year, it’s night and day.”

Dean, who was named to the Great Northeast Athletic Conference Third Team last season, echoed Hanley’s talk of a turnaround, saying that he’s upped his commitment by losing 40 pounds and developing a closer relationship with his pitchers, especially sophomore Jack Capotorto.

“This year, I think we have the guys in place and the talent in place to turn this thing around, and it’s already starting to show,” Dean said. “We’ll get there.”

Emerson was selected to finish eighth out of eight teams in a preseason coaches’ poll for its new conference, the New England Women’s and Men’s Athletic Conference.

The Lions play their first NEWMAC games on Saturday, March 22, in a home doubleheader against Clark University at 1:45 and 4:45 p.m. at Victory Field in Watertown. Before then, Emerson will return to action this Saturday with a doubleheader away to Gordon College.