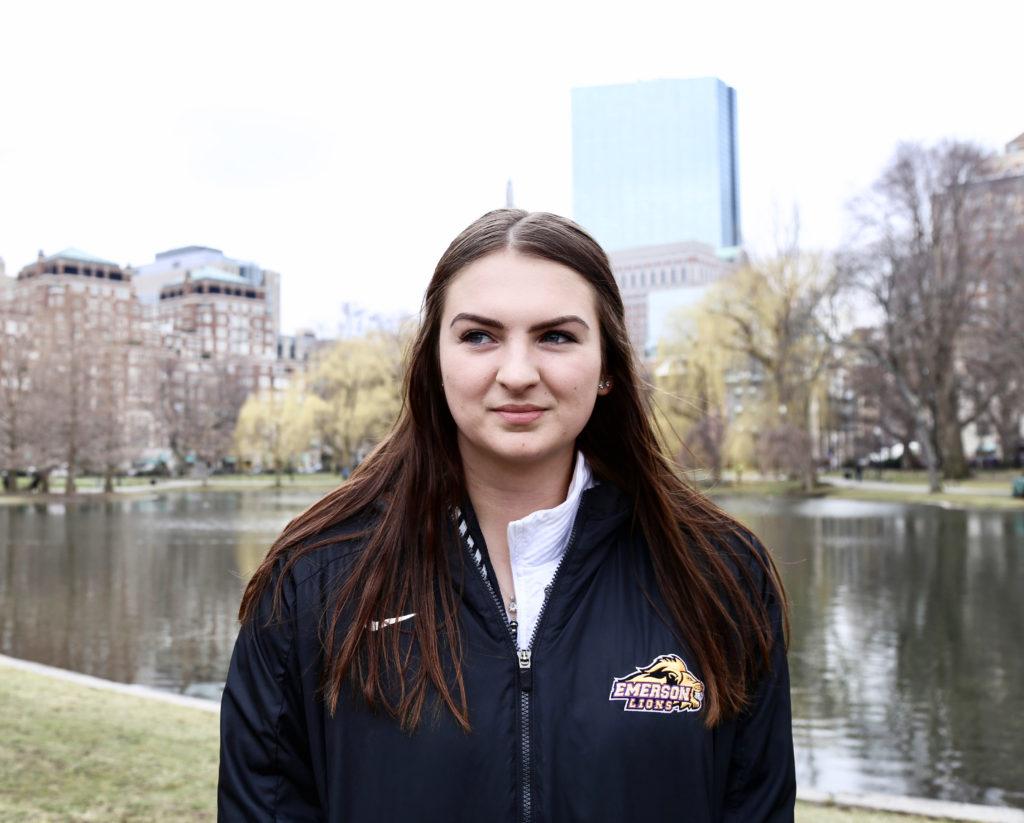 Eddleston traveled to Italy in high school to promote the return of softball to the Olympics. Photo: Zivah Solomon/Beacon Correspondent

Freshman pitcher Neely Eddleston did not expect to play a big role going into her first season at Emerson. However, in the second week of the season, she was named pitcher of the week for the New England Women’s and Men’s Athletic Conference.

Senior pitcher Casey Tsamis said she was impressed by Eddleston’s conference play and looks forward to seeing what she accomplishes in the future.

“Right now, she is one of the best pitchers in our conference and I think by her senior year it will still be that way,” Tsamis said.

Head coach Phil McElroy said Eddleston’s ability to find the right location for her pitches set her apart in the beginning of her Emerson career.

“We’ve had a lot of really good pitchers here at Emerson in my 18 years of being here. Neely might be the most consistent from a percentage standpoint [for] hitting spots,” McElroy said. “That consistency has really helped us win more games this year at this point than we have maybe in the last two years.”

Prior to coming to Emerson, Eddleston played for Wareham High School and for different club teams, including the Canton, Massachusetts based New England Dirt Dogs. Eddleston said playing club softball helped her adjust to the college game and contributed to her success so far this season.

“Playing with a good club team help me adjust a lot because people who play on club teams usually play in college so those good hitters [I faced] are coming to college when I’m coming to college,” Eddleston said. “It was somewhat of an easy adjustment.”

During the summer of her sophomore year of high school, Eddleston traveled to Italy with the Dirt Dogs to help promote softball and campaign to get it back into the Olympics for the 2020 Tokyo games. The International Olympic Committee added the sport back to the Olympics, along with baseball, during summer 2016. Eddleston said the experience of traveling to Italy was very exciting.

Eddleston came to Emerson because of its reputation as a film school and she studies visual and media arts at the college. She and a group of friends entered the Spring Film Festival this year and Eddleston said although they didn’t win anything, they had fun.

“In high school I took a lot of film classes because it really interested me, and I wanted to continue that [in college],” Eddleston said. “I wanted to do something I was interested in instead of business [which] is not that fun.”

“I think it gives the team confidence not only for this year but going forward,” McElroy said. “I think everyone is confident and feels good about the future.”

The Lions sit in seventh place with a 3-7 conference record, which puts them one place out of the NEWMAC playoffs. Tsamis said that the team’s goal for the season is to make the playoffs for the first time, and that Eddleston will play a huge role if they make it.

“For her to pitch her heart out and completely just dominate the mound, I think she’s going to play a huge role,” Tsamis said. “I wouldn’t doubt that she would pitch the first game in the playoffs and do very well there.”

Tsamis said that Eddleston has already endeared herself to the team.

“Neely’s so funny. When we’re on the bench we hang out and we eat Fruit Loops from time to time,” Tsamis said. “She has a very good energy about her and she works really well with the team overall.”