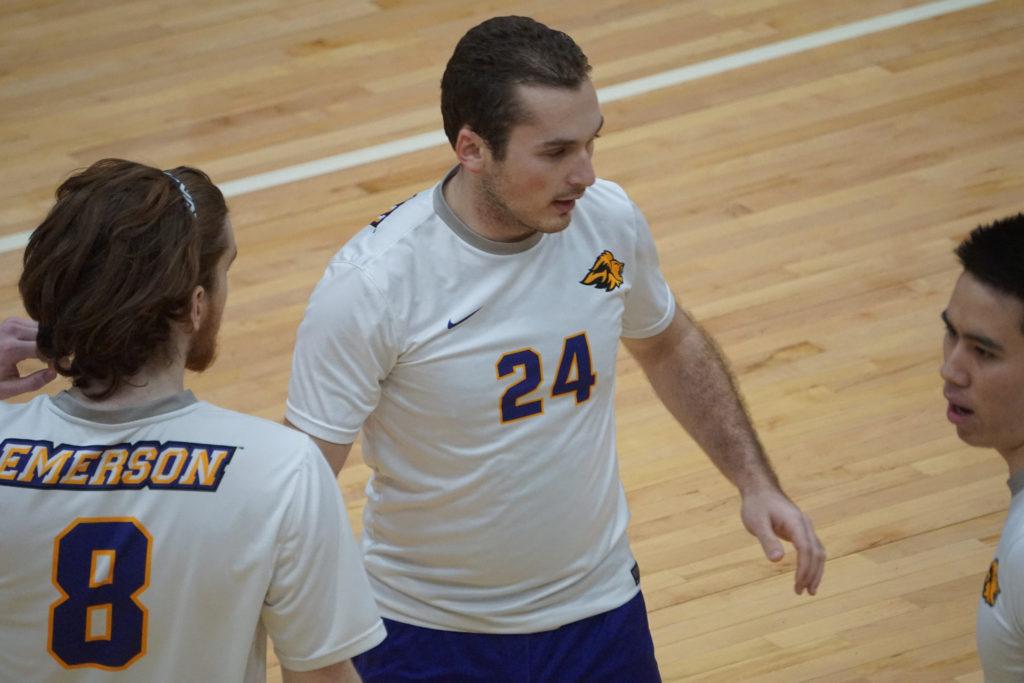 Willinger (center) featured in all of the Lions' games this season as a freshman. Photo: Dylan Rossiter/Beacon Staff

Freshman Sam Willinger is set to become a familiar face at Emerson College on and off the court.

On the court, Willinger featured in all of Emerson men’s volleyball team’s 24 matches during the regular season and played as a middle or on the right side. As the Lions’ regular season comes to a close, Willinger is second on the team in block assist, fourth in solo blocks, fifth in kills, and sixth in points.

Senior middle Stig Regan said Willinger brings valuable skills to the team even if it doesn’t show up on the box score.

“He’s very tenacious. He’s got great hustle and there’s definitely an enhanced energy to his play,” Regan said. “Whether he’s on or off in any particular game he still brings energy to the court. Even if he’s not helping us in a way that will show up on the stat sheet, he’s a huge positive for the team.”

Head coach Ben Read said Willinger’s willingness to give his all for the team impressed him early on.

“If you look out there it looks like he’s putting everything he has into every time he blocks, every time swings,” Read said. “He takes it really personally when he doesn’t perform well and it affects how our team performs on the court. It’s a good trait to have, showing that he is putting the team first and wants to do everything he can for him.”

Willinger said he originally started playing volleyball to get in shape and more involved at his high school in Miami, Florida, but he soon fell in love with the game. He played for his team at Alonzo and Tracy Mourning Senior High for all four years and played at club level for Coastal Volleyball. While college level is much different, Willinger said the league suits his playing style.

“College ball is definitely a lot faster. It’s a different mentality when you go in,” Willinger said. “It’s very much about the block and setting up a strong defense. With high school and other levels, it’s about running a fast offense, being aggressive, and I think that’s worked to my benefit because I’ve always been less of a hitter and more of a smart player.”

Off the court, Willinger represents the college as a tour guide for prospective students and their families.

“I’m really involved in my job here on campus at the visitors center,” Willinger said. “I run tours and I love it because every day I’m walking around saying hello to everybody and really selling the school and that’s something I really enjoy.”

Willinger also co-founded the Emerson chapter of Alpha Epsilon Pi—an international Jewish fraternity—with a group of close friends at the beginning of his first semester. The fraternity is not yet recognized by the Student Government Association.

The Miami native said he decided to attend Emerson not only because of its visual and media arts program, but because he wanted to live in a place different from his hometown.

“My biggest thing was I had always been in the heat and I wanted something different. I definitely got a different extreme [in Boston],” Willinger said.

WIllinger first got involved with film in high school, when he worked with PBS through a teacher at his school and started producing broadcast packages. In 2016, he was part of a team that won a Student Emmy Award for a news story, which followed a local ice cream shop that makes ice cream from nitrogen.

While he originally wanted to be a marine biologist, Willinger said that his involvement with film in high school pushed him towards the visual and media arts major at Emerson.

“I went to a high school that had an amazing film program and I just got so lucky to be pulled into that,” Willinger said.

Regan said he sees Willinger as a viable replacement for himself in the Lion’s squad after he graduates in May.

“We’ve had a lot of people come and go from the middle position in four years,” Regan said. “He’ll be around for a while because he’s just a freshman so at least one person in there is a long term investment. It’s good to know that there’s someone around who has a good grasp on the position.”