Freshman skater-girl balances life on and off the rink 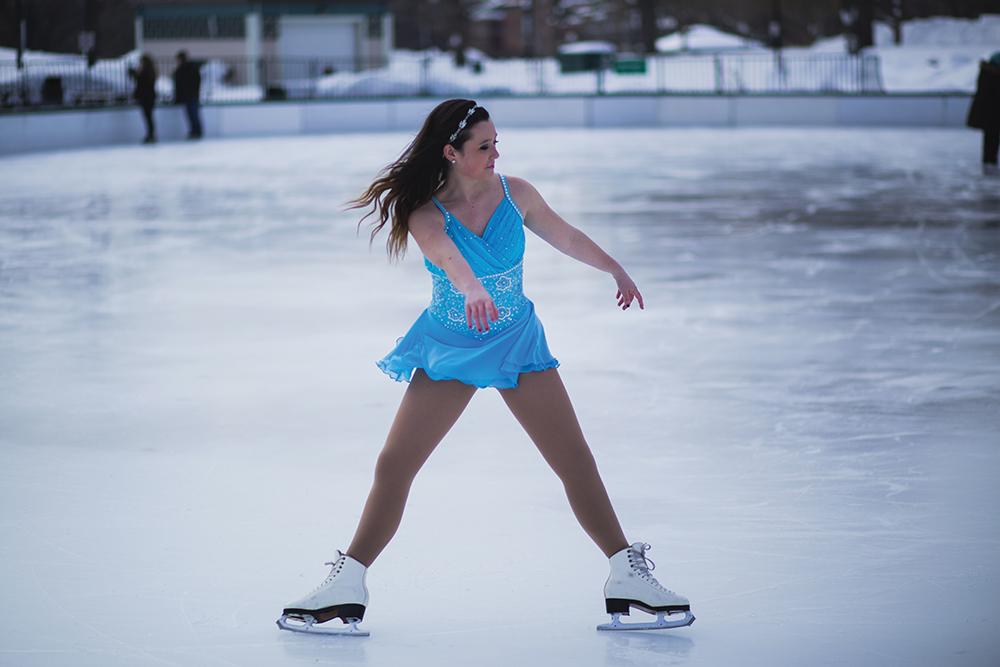 Ali Reid, a freshman journalism major, has finally struck a balance in her second semester schedule. By day, she’s taking notes in Research Writing and ringing up customers at American Eagle Outfitters. By night, Reid is training for national figure skating competitions at The Skating Club of Boston with her elite synchronized group, Team Excel.

Synchronized skating — that is, a team of eight to 20 skaters moving as one aerodynamic unit at high speeds — is a recent installment in Reid’s skating career. For the previous 15 years, Reid had competed as a freestyle singles skater, encouraged by her mother, who was a professional figure skater herself.

“As soon as I started to walk, my mom put me in figure skates,” said Reid, “We had to get them custom-fitted because my feet were too small to fit into the rental skates.”

Reid said that her mother, who doubled as her coach for 11 years, has been a significant influence on her passion for skating. Though she didn’t feel under pressure or stress from her mother, Reid said, it became difficult to balance the dual relationships of mother and daughter and of coach and student. At 13, she turned to coaches Gary Irving and Karen Gooley and began training at Igloo Ice Rink in Mt. Laurel, New Jersey.

When Reid came to Emerson in the fall of 2014, she said she was sure she would have to hang up her skates, since the college doesn’t have a team. But she soon found out about The Skating Club of Boston in Brighton and stumbled upon the tryouts for the team. The prospects of new friendships and the ability to continue growing as a skater drew her in, she said, and she was accepted in September.

“I’d never done a sport with a team aspect so I found it, and still do, extremely difficult to pick up and learn,” said Reid. “With single skating you have the ability to interpret music with different movements, which you can’t do in synchro. Everyone has to do everything exactly the same.”

The three-hour evening practices that she attends four times a week can be strenuous, but Reid said the practice has been paying off. The team recently traveled to Lake Placid, New York and placed second, qualifying them for the competition’s national level on Feb 25. This was Reid’s first competition with the team.

Reid said that when she is on the ice, all of her daily responsibilities seem to melt away.

“Having other people there for you and support you is awesome,” said Reid. “There’s so many things that happen in life, and when you get to step out on the ice and forget about it for a few hours, being with other people who inspire you is important.”

Between skating and schoolwork, Reid hosts a segment about pastry and dessert shops in Boston on Emerson Channel’s College Kitchen program, reports as the music correspondent for Good Morning Emerson, and works at American Eagle.

“What keeps me balanced is my set schedule and having a strong work ethic,”  said Reid.

On several occasions, though, Reid said she has experienced what she called a “Gabby Douglas moment.” Douglas, an American Olympic gymnast, has spoken out about her desire to end her career and be a “normal” teenager, and Reid said she can sympathize.

Injuries are one complicating aspect. She recounted how once, a blade struck her knee, and she ended up with 50 stitches.

“I’ve gotten pretty badly injured in the past,” said Reid. “I thought I would never skate again.”

Just this past semester, Reid broke four of the five metatarsal bones in her foot—the long bones in the middle of the foot—and was forced off the ice for five weeks.

“I missed 80 hours of practice during the time I had off,” she said. “I went to every practice and took notes, but I was so upset with myself that I got injured. It took a lot to get through that because I was so disappointed that I couldn’t be out on the ice with my team.”

Lee Anne Filosa, a full-time professional figure skater on Team Excel, said this dedication to the team is her favorite quality about Reid.

“[Reid] supported us and attended practices even when she was fighting an injury, or was so sick that she was wearing a surgeon mask,” said Filosa, 25.

Her teammates appreciated her attitude and enthusiasm during the squad’s trip to New York, said Mikaela Dicomitis, a skater on Team Elite and freshman at Rhode Island College.

“My favorite memory of Ali is when she got everyone involved playing Heads Up on the long bus ride,” said Dicomitis, referring to a smartphone game similar to charades.

Reid said she is considering coaching on the side to make money after graduation, like her mother, and she has thought about trying out for Disney on Ice, which features figure skaters performing as popular cartoon characters.

But for now, Reid said, she is happy traveling across the nation and competing with Team Excel. In two weeks, the team will compete at Nationals in Rhode Island.

Reid said she is currently working on mastering her double jumps and continuing to work on her synchro skills.

“Unless something drastic happens in the next few years,” she said, “I see myself continuing to do what I love.”