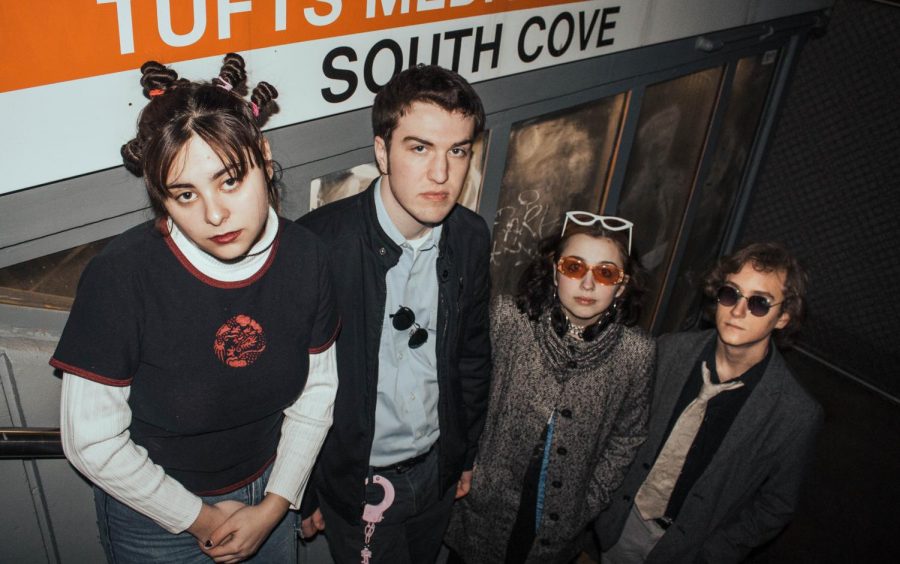 The band includes Freedman as the lead singer, Enright as the bassist, Grant as the drummer, and Cabreza as the guitarist. The band describes their sound as “DIY Post JazzPunk Fusion” or “Junk” for short. They released their first song, “Cat Eyes,” on Jan. 15.

Freedman said she met Enright on their second day at Emerson when she walked up to Enright and asked if she liked the band Cage the Elephant. The two became friends and soon after decided to start a band together. In early October 2019, Freedman heard from a friend that Grant played the drums temporally for the band Sunsetta, also formed by Emerson students, and she messaged him through her friend’s phone about joining the band.

“[In] one of the letters, he talked about the band so I wanted to be a part of the band,” Cabreza said. “So I learned guitar to be in the band.”

After Columbus Day weekend, Enright, Freedman, and Grant hung out together for the first time. Grant showed them the bass riffs—simple and appealing music motifs repeated throughout the song—for a song he made called “Cat Eyes.”

“For the Columbus day weekend, I was at home and it was 3 a.m. when I was playing around with my bass and made the bass riffs for ‘Cat Eyes,’” Grant said in an in-person interview. “So then after I wrote some lyrics for it, but that was how we kinda got our first song.”

Freshman Sonny Aronow is a close friend of the band and their audio mixer. Aronow mixed the audio for “Cat Eyes” for the band and is working on their next track “She is Mean” which is coming out soon.

“Through the time I have known them and the time they have been a band they have changed their tone of music,” Aronow said in an in-person interview. “The topics or content of their songs are based on disagreements they have but in the end, they are all friends.”

The band members struggled with generating a name for the band. They went through many names until one night during a creative argument about deciding if the band should be named Milk Foot or Cat Eyes, Freedman yelled out a remark, determining the official band name.

“We were all sitting in a room during this one Christmas party and I was like ‘God we can’t think of a name we are just having an Identity Crisis, and it was like God spoke to me herself,’” Freedman said in an in-person interview.

Grant said the band’s songwriting process is collaborative and spontaneous. The band’s songs are autobiographical, meaning all their music is based on life events the band experienced.

“We have this very weird thing where we can play something very spontaneous, very out of the blue, and then it’s a song,” Freedman said. “It’s because of astrology and the stars have such an influence on who we are.”

The band is working on making an extended play but they are having trouble finding a recording studio that puts their EP on pause.

“We were going to have much of it done by the end of spring break but because of the new rules, we can’t record at the school anymore so there is no way for us to find a facility to record,” Cabreza said. “It is very expensive to record off campus.”

The band said they are always working on new music and trying to expand their setlist for shows. The band’s main goal for the spring semester is to play in more house shows. They will play the closing act at the WECB 2020 Spring event on Feb. 26.

“We haven’t had the chance to enter the DIY scene and it’s something we really wanted to do because there are a lot of people we look up to that are involved with that scene,” Grant said.