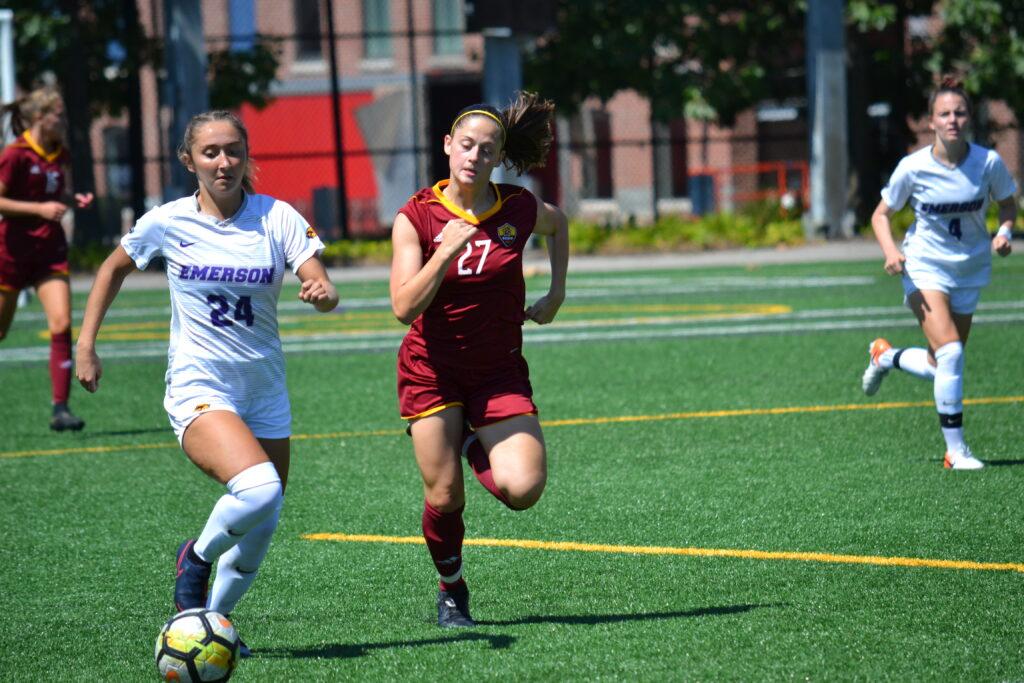 The women’s soccer team opened its season with a 2-1 win over Regis College thanks to an impressive performance from its freshmen starters.

Head coach David Suvak said the team is going into this season with lofty expectations due to a 2018 season highlighted by the team’s first New England Women’s and Men’s Athletic Conference tournament playoff win.

After scoring chances early in the first half that culminated in no goals for either team, freshman midfielder Ainslee MacQuarrie scored a goal in the 22nd minute.

Regis forward Brianna Gaynor leveled the scoring in the 33rd minute when she scored off of a rebound from teammate Kaylee Francis’ shot off the goal post.

“The first half was rough,” freshman midfielder Sage Stack said. “Then towards the second half, we kind of got back our intensity and finished strong.”

Stack is one of eleven freshman—including four starters—on the team this season.

“It’s definitely hard playing as a freshman,” Stack said. “Seniors are four years ahead of you, and they’re bigger than you and stronger than you. I think it took a while for all of us freshmen to get our legs and kinda figure it out, but I think we’re getting there.”

After an up and down first half for the Lions, Suvak said the team settled into a groove, which was a product of his halftime instructions.

“I think just asking [the players] to be more composed and you know, to be more efficient in the way they are passing and playmaking in triangles,” Suvak said. “I think they responded to very simple instructions because I think that is going to help us be successful.”

Eight minutes into the second half, Stack scored her first collegiate goal from distance that ricocheted off the goal post and into the net.

“I think at times they showed glimpses, [and were] very positive,”  Suvak said. “Playing with one another, I still think we have an ability to grow and develop as a whole group. I think they did a nice job today overall, but we can continue to grow from what you saw today.”

The Lions will resume non-conference play Saturday at 2 p.m. when they travel to New Hampshire to take on Plymouth State University.