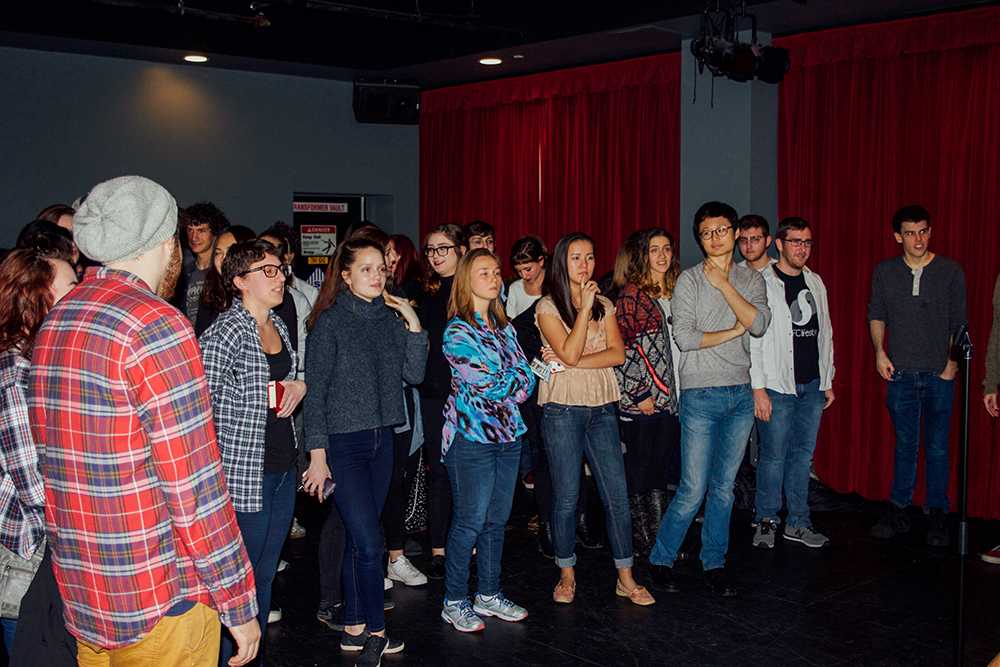 The phrase “drop the mic” elicits thoughts of a poet clad in black, reciting dramatic dissertations to a room equally as dark. The Experience Open Mic, started by a group of freshmen, takes the microphone to a new extreme—dropping conventionality and picking up a little creativity.

The Experience Open Mic mixed poetry, dance, music, photography, sketches, and audience participation into a flavorful show sure to quench any artist’s thirst for new inspiration. Including the performers, roughly 40 people came to the event held on Monday in Piano Row’s multipurpose room.

Freshman performing arts major Elmer Martinez is the man behind the microphone—the executive director of the Experience Open Mic. Martinez said he first thought of creating the multimedia performance while sitting in the library working on his computer.

“I was thinking about open mics and how I frequent some of the other open mics on campus,” Martinez said. “I’ve performed the same piece in different places and gotten very different responses. Something that always stays the same is that people will usually show up with a friend or two and will just sit down.”

The open mic allotted 10 slots for students to sign up for at the beginning of the show. The event was anchored by four headline acts, previously selected by the Experience Open Mic team. Martinez said he wanted to highlight artists from four different performance genres so the audience could have a taste of comedy, music, dance, and poetry.

“We have a lot of great outlets for creativity at Emerson,” Martinez said. “However, I feel like we are lacking in a community sense when it comes to people just taking a step back and being students and young people and just enjoying each other’s work.”

Freshman visual and media arts major Elise Van Heuven was one of the featured artists. She sang a cover of the song “Everything Has Changed” by Taylor Swift.

“I liked the idea of it being multimodal, as well as the set-up they chose for the event,” Van Heuven said. “You don’t always get to do things outside of your major here at Emerson, so I thought this was a cool opportunity.”

At random points in the show, audience members were asked to mingle around the room, dance, and shout—all with the purpose of meeting new people.

“At other open mics, you don’t really talk, you just watch people perform,” Martinez said. “If you’re too cool for school, don’t come to this event because it’s going to get wacky.”

Freshman interdisciplinary major Erin Hussey helped coordinate the visual media aspect of the open mic. Four students showcased their photography and sketches on a table at the back of the event. Hussey said she wanted to create a space where visual and performance artists could share the spotlight.

“One of the things that we had in mind when we created this event was that there are so many talented artists at Emerson whose work goes unrecognized,” Hussey said. “Especially with visual arts, a lot of photographers, graphic designers, and painters don’t have a space to be recognized by their peers. The Experience strives to bring artists of all creeds together and create a collaborative community.”

Freshman visual and media arts major Joe Turner headlined the comedians of the show. Turner said he has participated in over 50 open mics, none of which were quite like the Experience.

Martinez said he hopes to host an open mic every month starting in the fall.

“I want this to become a life experience where you can walk away with something that you can talk about for years,” Martinez said. “Or at least until the next show.”