From stages to classrooms: Emerson theaters during COVID-19 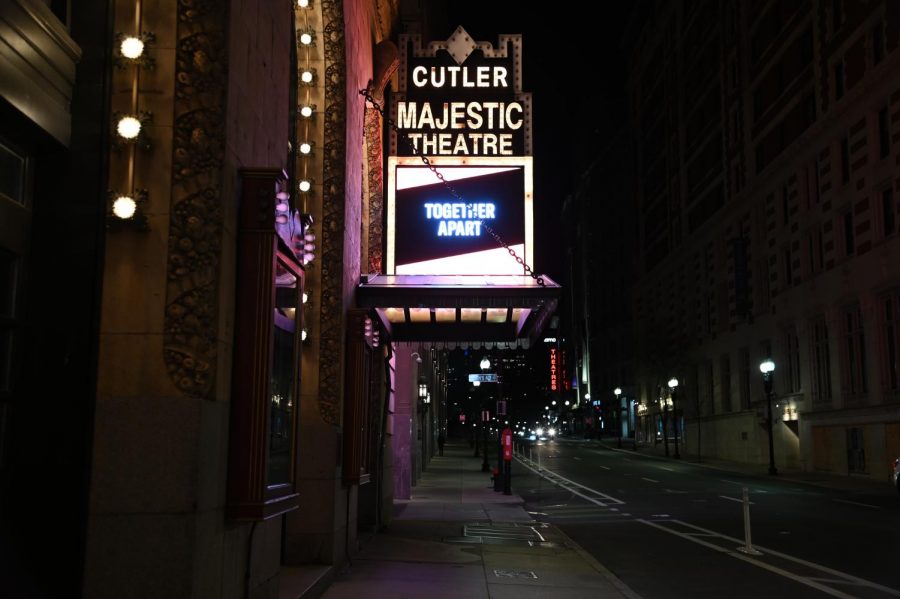 The exterior of Cutler Majestic Theatre.

In March 2020, the stages of Emerson College fell silent for the foreseeable future. One year later, in March 2021, these stages are still just as empty.

Fortunately, the college has utilized the stage spaces as new classrooms for students in the year since they closed. The Paramount Center and the Cutler Majestic Theatre are some of the most prominent performance spaces on campus, both of which are managed by ArtsEmerson.

Scott Wallace, senior manager of production for Emerson College Office of the Arts, spoke with The Beacon to discuss how COVID-19 has changed the way Emerson theaters operate.

“[Office of the Arts have] worked with the college and the administration to pivot in order to be able to open up the theaters for classroom space,” Wallace said. “The Office of the Arts staff has been dedicated to supporting the academics of the college in all of our theater spaces and being extra flexible helping Emerson Stage to fulfill their digital content.”

As the physical spaces change around them, artists that previously performed on stage had to adapt to the new digital realm of performance. Joe Antoun, a senior faculty member with the performing arts department, has directed over 20 shows at Emerson since 2001. Antoun is currently teaching classes while also directing the student-written play Going to California.

Rehearsals have been entirely over Zoom, with students practicing remotely in their dorm rooms and other spaces on campus. When the show goes up, the actors will perform from separate studios. Each are equipped with a green screen and a computer.

“Students really are much more adaptable; it’s been a totally positive experience as far as directing the shows with the actors and the stage-management team,” Antoun said.

He also spoke about how theater over Zoom is not quite the same as it is on stage.

“I would be lying to say that this is the way of the future, maybe it is, but I don’t find it as exciting as live theater.”

On Feb. 25 of this year, the Baker and Polito administration announced plans to advance to Phase 4 of their Massachusetts COVID-19 reopening plan, which includes the reopening of theaters with a limited audience capacity. However, due to these performance centers now being utilized as classrooms, there is an issue of how the space will be managed.

“Right now, because academics are fully ensconced within the spaces, there will be no disruption of that—we will continue on to support academics in the spaces per COVID protocol,” Wallace said.

While talking about the more distant possibility of reopening, he said that conversations between the Office of the Arts and the administration will be underway around May of this year.

“There’s a hope that the theaters will open up for regular use in October, although I don’t know what that might mean quite yet,” Wallace said.

Although Emerson stages may continue to be silent for the rest of the semester, the art created by students and faculty alike continues to be powerful regardless of any new locations or limitations.