Gay by May explores coming out with comedy 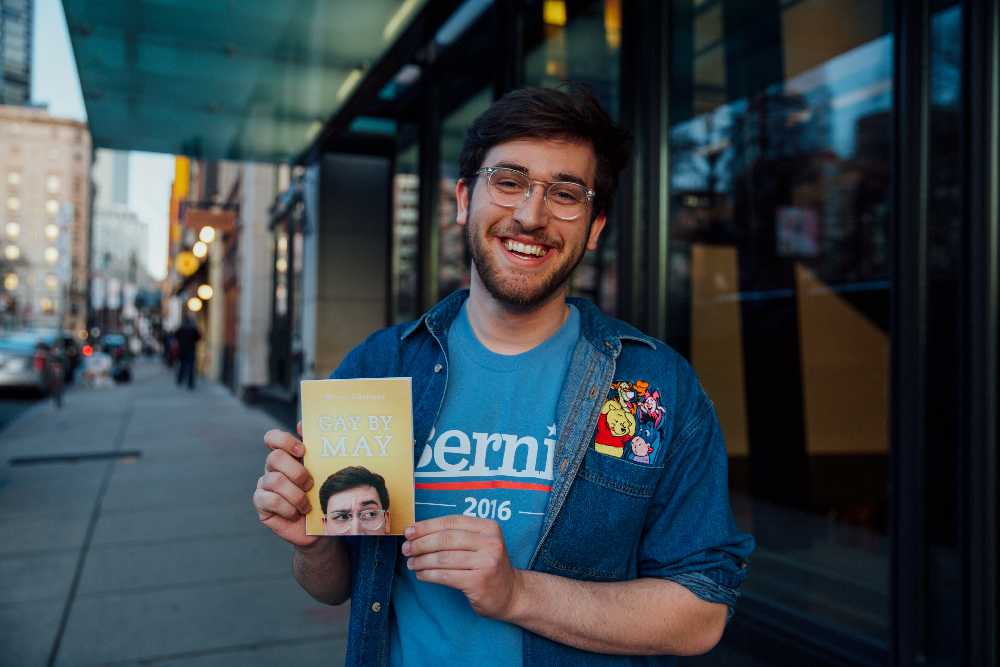 Gay by May. Noun: (1) the idea that someone who arrives at Emerson identifying as straight in August will realize they are gay by the time summer rolls around. (2) The title of a new book written by junior visual and media arts major David Carliner.

Gay by May is an autobiographical collection of humorous essays set to be released on April 19 by Wilde Press, the publishing house of student-run organization Undergraduate Students for Publishing or Pub Club.

“It’s comedic personal essays about my sexual identity, me trying to navigate that, and my mostly lackluster love life,” Carliner said. “A lot of the stories can be described as something seems to be going well and then technically it works out, but all this stuff about it is funny and embarrassing and awkward.”

The book contains about 20 stories and lists with titles like, “Fun places to cry about your love life,” and “The men on my vision board.” Chapters are punctuated occasionally by tweets from Carliner’s Twitter account like, “Put ‘I’ve been through a lot but at least I looked cute sometimes’ on my tombstone underneath my favorite quote from The Awakening.”

Gay by May is one of two 50 to 80 page student manuscripts published by Wilde Press this semester. Carliner’s work was chosen alongside These Thoughts That Hold Us by senior writing, literature, and publishing major Sarah Cummings. Both were selected by the club from roughly a dozen manuscripts put forward in February. Wilde Press is funded by the Student Government Association and printed roughly 130 copies of each for the Harvard Book Store.

Carliner, who said he came out as gay in October of his freshman year at college, said he had always heard “gay by May” in reference to the culture of Emerson.

“I remember thinking no one was going to believe me if I was straight [and went to Emerson] because my friends at home would joke about [gay by May],” Carliner said. “And then after that, I just thought it was this funny phrase that would be appropriate for the title.”

Carliner said an Emerson friend took him to a Pub Club meeting when he visited the college as a high school senior. He said he has been interested in publishing a book ever since.

“It really was such a moment of, ‘Wow, this is a place that I want to be because people do stuff like this,’” Carliner said. “Experiencing it now and having that dream come true is really a reminder that this doesn’t happen at other schools, I don’t think.”

Carliner said he frequently tells funny or awkward stories about his life during stand-up sets or casually in front of friends. He said he decided to turn them into a book once he felt he had enough material. Carliner said his favorite part of writing Gay by May was adding new jokes.

“It’s a book that I tried really hard to make funny,” Carliner said. “I hope people laugh at it and enjoy it rather than go, ‘This is dumb. Why did this guy think his life was entertaining enough to write about?’”

Carliner said he was influenced by the work of David Sedaris, Tina Fey, and, in particular, Mindy Kaling.

“She’s probably the person who I tried to emulate the most in my writing,” Carliner said. “She’s very casual and relatable and really funny.”

Carliner focuses on writing for film and television at Emerson, and he said he would love to incorporate his own experiences into his future work.

“I haven’t seen gay representations on TV where the people don’t really know what they’re doing or aren’t as confident in their sexuality,” Carliner said. “A lot of representations are very polarizing. They can be good, but I feel you don’t see more self-conscious young gay characters, which is what I feel like I am a lot of the time.”

Daniel Lyerly, a senior writing, literature, and publishing major and marketing director for Gay by May, said he immediately loved Carliner’s collection of stories.

“I found it amusing, heartwarming, and real, just like David himself is,” Lyerly said. “It was the one book that, out of anything that was submitted, I wanted more than anything to publish.”

Lyerly said his favorite story was “First kiss,” in which Carliner recounts his “first legit kiss” with a guy he met on Tinder at Mardi Gras while in New Orleans for spring break.

“Like with all of the other stories, he’s able to communicate the awkwardness of the situation that is endearing nonetheless to himself and to the people in the story,” Lyerly said.

At Wilde Press’ book launch on April 19, Carliner and Cummings will read from Gay by May and These Thoughts That Hold Us. Both bookswill be available for $8 and all proceeds will go to a charity of the author’s choice. Carliner decided to support the True Colors Fund, a nonprofit dedicated to ending LGBTQ youth homelessness.

“I feel so accepted that I can literally write a book about my identity and have people publish it and have people excited about reading it,” Carliner said. “But then there are people who are homeless for various reasons to do with sexuality or gender identity. I picked [True Colors] because it seemed like a way of doing something practical with my privilege and not just sitting on it.”