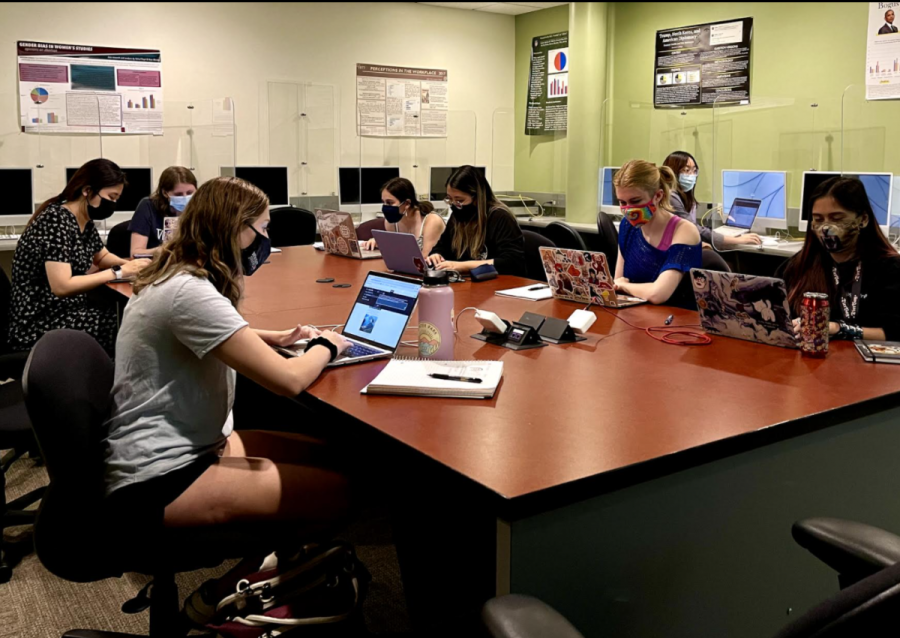 Emerson is one of many institutions across the country that is seeing an increasing disparity in higher education enrollment numbers—as female populations at colleges and universities continue a steady increase, while male populations decline.

Emerson’s population sits at 63 percent women and 37 percent men, according to the latest enrollment data from the National Center for Education Statistics—a ratio of nearly 2:1. This data, which only reflects the binary legal sex gathered by application providers, mirrors a balance that is swinging away from men and towards women nationwide.

Despite historical structures designed by men to exclude women from higher education, the disparity is at an all-time nationwide high. Last year, women made up 59.5 percent of college students per the National Student Clearinghouse, compared to the male rate of 40.5 percent. Men also account for an outsize part of the nationwide decline in enrollment—over 70 percent of the 1.5 million decrease since 2016.

Though Emerson’s gender disparity has remained relatively constant in that time, it is still skewed even in comparison to the national average. Justin Sharifipour, who serves as associate vice president for enrollment and dean of undergraduate admissions, attributed the college’s long history of strong female enrollment to the humanities-oriented curriculum offered.

“Given the programs that we teach, they’re more [on the female side] of the men vs. female spectrum,” he said. “There is a difference in how students are advised and the career obtainments that are out there.”

Yet the male-female disparity goes beyond the gap in enrollment; female applicants also consistently represent a much larger proportion of applications than men. 71 percent of first-time applicants in the 2021-22 school year were women, according to college documents obtained by The Beacon. On average, women have made up 75.4 percent of the application pool every year since 2012—in other words, three in every four applicants to Emerson.

“It’s a fairly different gap,” Sharifipour said, distinguishing between the enrollment and application gaps. “But it’s more consistent than the disparity in applications.”

In response to the deepening gulf between male and female numbers, colleges across the country have resorted to a tacit form of “affirmative action”—targeting not race, but gender. Sharifipour, however, insisted that the college does not employ any such tactics in regard to male admission.

“We have no quotas on anything,” he said. “We look at the quality of the applicant, high school history, essays—a holistic student review.”

Instead, Sharifipour said that Emerson’s admission process is centered on reaching out to communities that are disadvantaged or marginalized, such as people of color.

As such, the disparity only grows wider when examined through the lens of race. The college’s 1,970 white women account for 57 percent of the female population, and nearly 40 percent of the total population—suggesting that Emerson is not only predominantly female, but a predominantly white female institution.

Despite females outnumbering males in enrollment and applications, men were statistically more likely to graduate from the college; the Emerson classes of 2016 and 2018 had as much as a six percentage point difference between men and women. Nationally, the class of 2018 also had a six-point difference—but with women leading men.

The rate of graduation has fluctuated since the first-year students that entered in 2010, according to the latest Emerson factbook. Women held a higher retention rate for 2010, 2011, and 2013, a one-year advantage compared to men, who held a higher rate for 2012 and 2014.

Sharifipour did not comment on whether Emerson’s enrollment department had any strategies to alleviate the disparities. However, he did suggest that the gap had deeper socio-cultural roots than just a simple admissions discrepancy.

“There’s more and more evidence about which end of the spectrum [politically] requires a degree more,” he said. “When you look at the voting pattern and how it went, with such a bigger divide between men and women, there’s something there and how is that impacting [the gender ratio].”