Get the vaccine, your lack of sympathy is showing 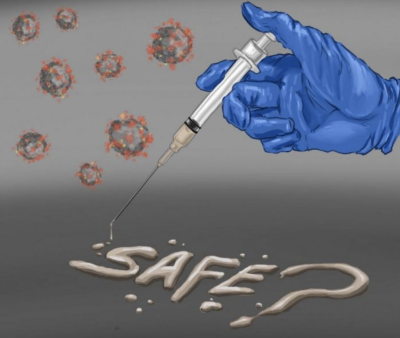 When the general population became eligible for the vaccine on April 19, cases, hospitalizations, and deaths drastically declined, providing the much-needed glimmer of hope.

But with the arrival of the highly-transmissible Delta variant in late June, those hopes were shattered thanks to anti-vaxxers’ refusal to get the vaccine and slow the spread.

Despite the clear evidence that vaccination decreases the risk of COVID-19, only 56 percent of the U.S. population is fully vaccinated (and 78 percent partially vaccinated), according to Global Change Data Lab. The threshold for “herd immunity,” where a majority of the population reaches immunity against a disease, is at least 70 percent.

For months, many have tried to understand the plight of the unvaccinated. In some cases, lack of access to healthcare and ineligibility based on age or health status explains a lack of vaccinations. Not to mention the disparities in medicine have existed since its creation, historically and presently favoring white patients’ needs and access to care over Black and Latinx patients. These disparities have led to a severe lack of access to healthcare for communities of color and created a huge disconnect in trusting medicine for these communities.

Medical racism has had an effect on who can and has been vaccinated against coronavirus. According to a study by the Kaiser Family Foundation (KFF), 60 percent of the 78 percent of the population that is partially vaccinated is white, while every other race was at most 17 percent of the vaccination rate.

In attempts to reduce this enormous gap, reallocation of additional vaccine doses and prioritization of appointments and locations for underserved populations have been efforts taken by some states since the start of general vaccine distribution, according to KFF.

This disproportionate gap still persists as these efforts are not enough to gain the trust of communities of color that have been mistreated and disregarded for so long.

All of this is understandable.

But if being unvaccinated is a choice that you made based solely on personal beliefs, not influenced by any sort of health or access obstacles? That kind of disregard for others’ health is absolutely unforgivable.

Any sympathy towards those who make this severely uninformed choice is not deserved. Anti-vaccine behavior has only gotten more reckless and more dangerous as the months go by.

There have been too many stories of exposure and infection, and even deaths, of the vaccinated or those who are ineligible (children under the age of 12).

Like a parent who knowingly sent their infected child to school, exposing at least 80 students, or this unmasked, unvaccinated elementary school teacher who spread the virus to 12 of her 24 students. If any of those students died, the parents of the infected children and the unvaccinated teacher would be responsible for their deaths.

The bottom line is: If you spread COVID-19 as an unvaccinated individual because you personally don’t believe that it’s real or you “disagree” with getting vaccinated against it, and someone dies, you killed someone.

Lately the topic of “murder” and choice have been in the news regarding Texas’s near-total ban on abortion as a federal appeals court reversed the lift of the ban just last week. But pro-choice protesters have not been the ones chanting “my body, my choice” as of late.

If we used the same “logic” as conservatives regarding abortion, that parent and teacher would have both been charged with criminal negligence, and possibly manslaughter.

But how silly of me to think that women deserve the right to choose whether or not to put themselves through the mental and physical toll that comes with a pregnancy.

Everyone knows bodily autonomy only matters when conservatives have to take a little needle to the arm. You know, I hear that the “Buzzy”––a shotblocker in the shape of a little vibrating bee––works great in helping ease the anxiety of getting a shot and makes it less scary. I suggest trying this, it comes with an ice pack and everything. It might help make it easier for you.

Clearly, there is anger and confusion about the shot among anti-vaxxers, but encouraging them to get vaccinated through mandates and legislation has only made them more rabid and more violent.

Anti-vaccine protests and actions have gained more momentum over the last couple of months, and with that came threatening and dangerous behavior.

In the past two months, there have been many instances of this; a vaccine site in Georgia had to shut down due to threatening protesters, a restaurant hostess was assaulted in New York by guests when asking for proof of vaccination, a man was stabbed and a reporter attacked in a Los Angeles protest, and anti-vaccine groups have been encouraging those infected with COVID-19 to not seek treatment and pull infected loved-ones out of ICUs.

Thousands of people have tried incredibly idiodic and dangerous “cures” to coronavirus, like taking antimalarial hydroxychloroquine and horse-dewormer grade ivermectin, while others have ingested disinfectants like bleach and hand sanitizer.

All of these “treatments” led to way too many calls to poison control, according to Forbes.

Finding alternative treatments is largely a part of the “alternative facts” that many fell for in the rabbit hole that is conservative conspiracy theories, much of which is perpetuated from Facebook to FOX News.

Some concerns that cloud the anti-vax community’s judgment are the speed at which the vaccines were developed and that mRNA vaccines “rewrite” your genetic code (boy, are they gonna be thrilled when they learn how viruses work…).

Even though the legitimacy of the vaccines and how they work have been vouched for repeatedly, people still refuse to believe the science and choose to listen only to voices that echo their uninformed opinions.

Based on the fact that the federal and state governments have had to provide us with childish incentives to get vaccinated including state and federal million-dollar lotteries and free beer, I’ll explain this in a way anti-vaxxers should be able to understand.

You are not special, the government does not care about keeping tabs on you and if they wanted to track you, they wouldn’t have made such an effort to do so. (It’s not like you have a phone that can easily be tracked, pay taxes, or are assigned a number at birth or anything, right?)

You are not more qualified to research a vaccine than actual doctors or scientists. You know, the ones who have degrees in the subject and have contributed to actual medicine. What are you gonna do, discover the cure to Covid with a couple of mediocre Google searches riddled with typos? Get real.

Do you get scared that the government is trying to “thin the herd”? I hate to break it to you, but the vaccinated aren’t the sheep in this scenario.

You’re not fighting some noble war defending your constitutional rights. You are just being a selfish asshole prolonging this hellish reality for the rest of us who actually have self-awareness and compassion––caring about and being sympathetic to others, just in case you didn’t know what that meant.

You should try it sometime. And here’s a thought, you can start by getting vaccinated.