Giannone giving her all in her last games 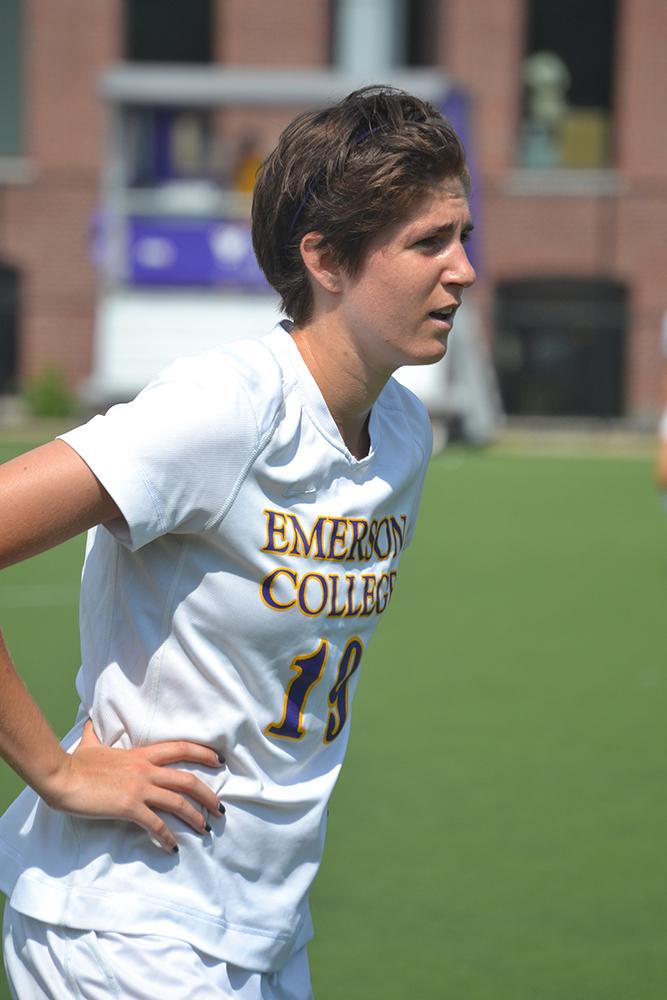 Alyssa Giannone has played soccer since age five, and as her final season comes to a close, a second place ranking for assists in New England Men’s and Women’s Athletic Conference comes with it.

“When I was younger, I was always a level above everybody, so I was like ‘I can really play this sport,’” Giannone, a senior journalism major, said. “I fell in love with playing. Everybody says ‘You love the game that you play,’ and that is completely true.”

Giannone said that her talent was recognized by DI schools when she was in high school, and soccer was a huge factor when she was deciding on where she wanted to attend college.

“I actually got recruited to [Boston University], but I would’ve had to gain 20 pounds of muscle mass, and that was just something I was not willing to do,” said Giannone. “Emerson had the athletics that I wanted, where I could play and also focus on exactly what I wanted to do [academically].”

Giannone’s passion for soccer goes beyond her playing time on the pitch, she said. The fourth year starter loves the excitement it brings out in people in all its aspects.

“A good, well-played game of soccer is one of the most exciting things in the entire world,” Giannone said. “It is such an amazing rush.”

Giannone is tied for second with five assists this season in the NEWMAC, along with her teammate, graduate student Alexandra Dezenzo, and Ashleigh Hartsock of Mount Holyoke College. Emerson senior Mollie Coyne and freshmen Rachel Lord and Jess Frost are tied for third with five other players from colleges and universities in the conference.

Giannone knows her own strengths on the field and uses it to her advantage, she said.

“I’m able to see a pass or see a through ball, or see a long ball that maybe another player wouldn’t be able to make,” Giannone said. “So when you have connections with players on the team, that also see that way, it’s really special.”

Head Coach David Suvak isn’t surprised by Giannone’s ranking and thinks that, as a whole, the drive to score has increased this season.

“I think Alyssa is good at getting the ball behind the defense for scoring opportunities and uses many skills to do that,” Suvak said. “Her ability to dribble and pass well are really important.”

Suvak said he also sees the addition of freshmen and transfers this year as a big help on offense.

“She has always done really well with assists throughout her four years here but I think we have, this year in particular, many attackers that have the ability to put the ball in the back of the net,” Suvak said. “I think having goal scorers to compliment her is the big adjustment, or the big change.”

Coyne, a senior marketing major, said Giannone’s skills contribute to her success as a midfielder and a key component of their offense.

“Alyssa’s very fast, so that definitely helps. She can get through balls and she is really good at taking it down to the end line and crossing it,” Coyne said. “I think that is definitely one of her stronger skills and she has very quick footwork too, so she’s good at getting around the players.”

Even though her teammates see her as a strong player, Giannone is still working to improve certain skills, she said.

“I know that it’s really a cliché, boring thing to say but I think it’s interesting that, in my very last season of soccer ever, I’m still looking to have better foot skill and get around people,” Giannone said.

Coyne said she has played with Giannone for the entirety of their time at Emerson and even played against her when they were younger, growing up in New Jersey.

“I love playing with Alyssa. We’ve played opposite sides [of the field] from each other all four years [at Emerson] and we definitely have a dynamic that’s shown in the past few years,” Coyne said. “I think we really click on the field; it’s always fun when she’s out there. She is a very passionate player, so that’s always good to have.”

Emerson has 53 goals scored so far this season, ranking first in goals scored overall. Giannone said she believes the high number of goals scored has a lot to do with how close the women are.

“When you have a team as close as we are, and then that translates on to the field, it’s incredible,” Giannone said. “Seeing those stats makes me think that there’s no other team in the NEWMAC that is as tight knit as we are on and off the field.”

With playoff season approaching, only the top seven ranked teams make it to the postseason and Emerson is in the tenth spot.

The team has three conference games left in the regular season; two home games against Coast Guard Academy and Massachusetts Institute of Technology, and one at Clark University.

“I’m so proud of the seniors—that’s me, Mollie, Taylor, Haley, Maddie, Chrissy,” Giannone said. “The six of us have been together since the very first day of preseason, and I am just really proud of the way that we have grown as people and as players.”

Editor-in-chief Claire Nobles and managing editor Anna Buckley, friends of Giannone, did not edit or contribute to this report.