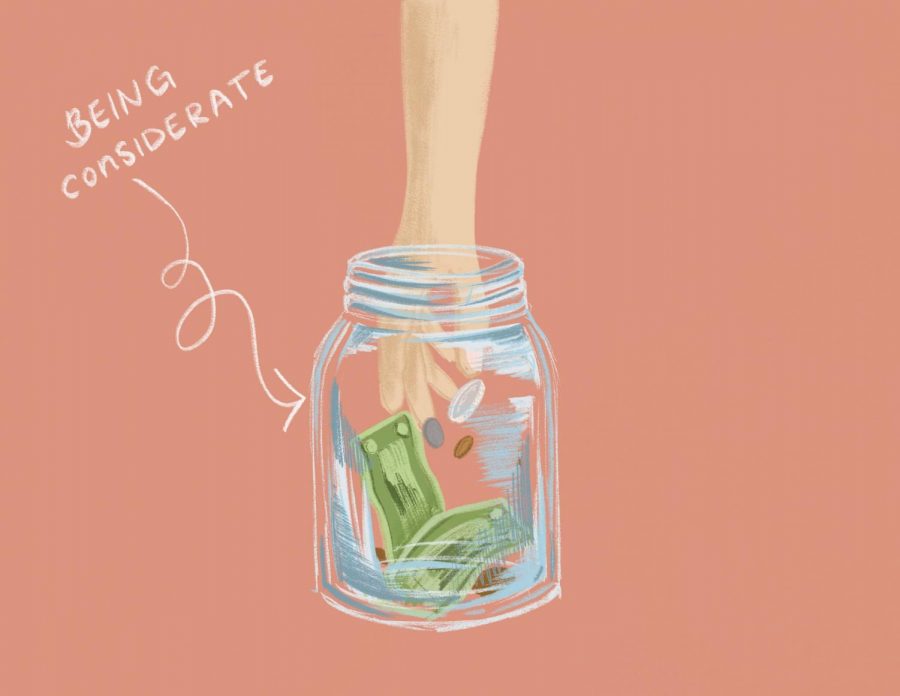 "I never really cared about tipping 20 percent or treating waitstaff respectfully until I found myself on the other side of the table."

The quote “put yourself in someone else’s shoes” takes a hard look at empathy.

Whenever I see a “Masshole” driving in Boston, I just remember my mom telling me, “they probably just really need to poop.” While I chuckle on the roads and actually grow some empathy for crazy drivers, I wish customers could put themselves in service industry workers’ shoes as well.

I find myself behaving extremely empathetic to waitstaff because I’m a server at Legal Sea Foods. But we shouldn’t have to actually work in the service industry to be good customers.

I never really cared about tipping 20 percent or treating waitstaff respectfully until I found myself on the other side of the table: writing down complicated orders, opening a wine bottle with one hand, cracking lobsters, and memorizing food and drink menus—while still being a prompt and kind waitress to about five tables at the same time. All of these details were a lot more complicated than I thought they’d be.

When nights were hectic and I was “in the weeds” or struggling to catch up and handle all my tables at once, I always worried I wouldn’t get a good tip because of my slow service. One of those nights, a table told me to take my time. “We were servers once, too. We get it,” one guest said.

I sighed with relief. This was a coded message not to worry, and I didn’t. They still gave me a good tip.

Now, whenever I go to a restaurant, I see myself saying the same thing to the server who’s waiting on me. I also make sure to give a good tip because I see myself in them. I know they have to clean their tables, fold 100 linens, and take out the trash, too. I know how hard you have to work to get a good tip. I’ve worn those black, non-slip shoes before.

In a Vice article about working in an ice cream shop, author Bettina Makalintal still treats workers with the same respect even after leaving the job two years later.

“I’m nice to the point of apologetic, and I always, always put a few dollars in the tip jar—that kid behind the counter deserves it,” Makalintal said.

There is a certain expectation when we dine out that we should receive good service. We are allowed to have this kind of expectation, but we shouldn’t use it as an excuse to mistreat workers who unfortunately couldn’t exactly give us that experience.

“In times of stress, ice cream soothes; in times of happiness, it commemorates; and being the person who provides it puts you in the middle of all of those things,” Makalintal said. “When you can’t create the exact experience each person needs, it’s easy to get on people’s bad sides, and the miserable humidity of summer, I’m sure, never helped the situation.”

According to the U.S. Bureau of Labor Statistics, as of 2018, there are 3.7 million food service workers like Makalintal who prepare and serve food to customers, including fast food, and there are 2.6 million waiters like me. These are the millions of people nationally who work to serve others, but let’s not forget those millions are also human beings who also deserve respect, understanding, and empathy.

However, I’ll admit that the working experiences in only one service industry doesn’t always make me a good customer.

Once, my friend Julianne Giffin and I were walking around a clothing store when I picked up a shirt on a folded pile, then dropped it back. Giffin said, “Pick that up and fold it back. I work in retail.”

Giffin works as a sales associate at Urban Outfitters. She does everything from folding and keeping the store tidy to shipping, working fitting rooms, making displays, and handling customer returns. Giffin is aware the workers get paid to fold clothes, but it makes workers feel good when they see customers help out.

“It’s just a nice gesture that people think about the people who work there. They don’t have to make it perfect, but if they put it in the same area or something, it’s just nice,” she said.

At the time, I was embarrassed Giffin called me out in the store, but I’m glad she did. She was right. I was such an advocate for servers but a hypocrite when it came to other service industry workers.

Etiquette expert Diane Gottsman said “tips” stands for “To Insure Prompt Service.” It’s a “valuable reminder to treat your server with respect and courtesy” and to reward good service. Retail stores won’t be able to operate if everyone leaves clothes around in their improper areas. Service industries depend on customers to be respectful and courteous to their employees, too.

It’s easy to think that it’s a service industry workers’ job to please the customer. However, it shouldn’t be hard to also remember that we have a job to treat workers like all humans, too—humans who aren’t perfect. We make mistakes sometimes, but we rely on each other to understand them, because we’re all just trying to make a living.