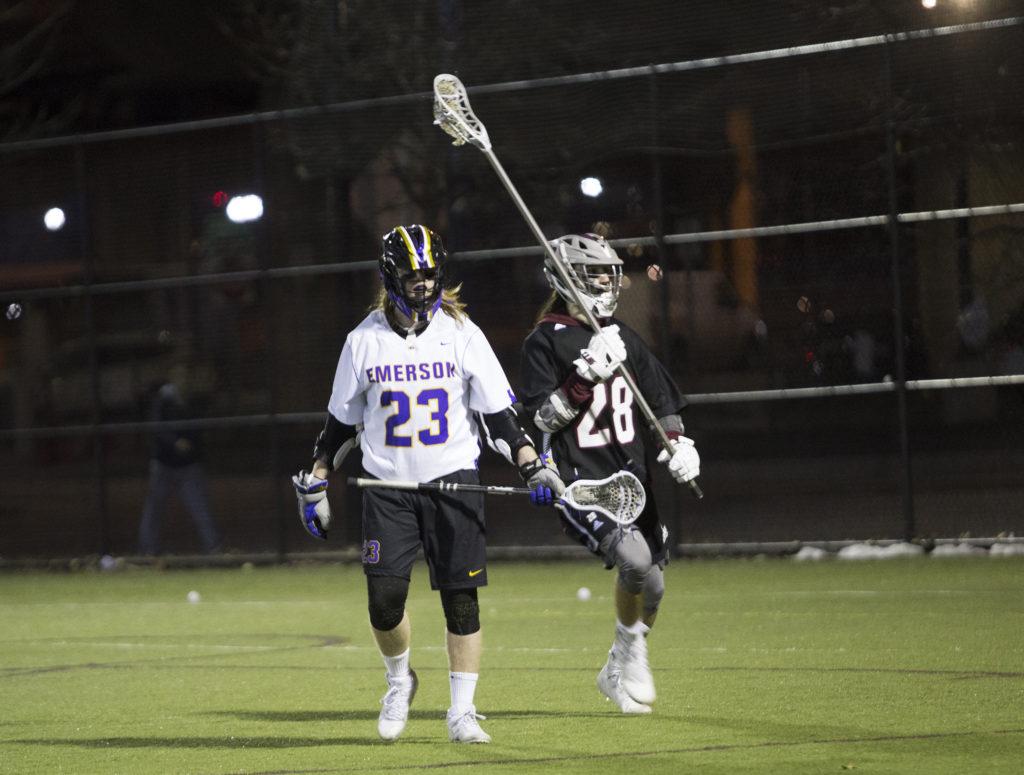 Grooving on and off the field, Jared Brush led the Emerson men’s lacrosse team to a hot start early in the season.

Brush, a junior, scored 28 goals last season—his personal best. He’s on track to surpass that record while leading the team with 17 goals and 20 points.

Brush prepared for the fierce competition in the New England Women’s and Men’s Athletic Conference by training in the offseason.

“I just hit the gym a lot more than previous years,” Brush said. “NEWMAC polls are really strong, which I learned last year, so I knew I had to get bigger.”

The effort in the gym hasn’t gone unnoticed by second–year head coach Matthew Colombini. Colombini knew Brush had potential last year but saw that he needed to improve.

“Jared really committed over the summer and all winter to getting into the weight room and eating right. Really working on his game overall,” Colombini said.

Along with his offensive production improving, Colombini has also noticed Brush become more comfortable on the field. Playing well and working harder led to Brush feeling more confident on and off the field, Colombini said.

Bailey Kennedy, the Lion’s goalie and Brush’s roommate, enjoyed watching his teammate improve during the offseason.

“He knows he has a good shot and can really place the ball well. His confidence has helped him peak, and he knows he can step up on the big stage,” Kennedy said. “When we need a goal, he can get it for us.”

In the first game of the season, Brush scored five goals to help the Lions capture a 13-12 double overtime win against Mount Ida College.

“Jared was finding the pockets and the weak spots in their defensive and was able to score goals,” Kennedy said. “His performance all season has been outstanding. If he wasn’t playing or wasn’t healthy, maybe we would have different results.”

Brush earned the NEWMAC Offensive Player of the Week award after the second game against Lyndon State College where he scored another three goals.

On the field, Brush has been scoring goals. Off the field, he’s jamming out to his favorite musician—Mark Wahlberg. Brush earned the nickname “Marky” because he likes the actor and hip hop group member so much.

“Ever since I heard ‘Good Vibrations’ by Marky Mark and the Funky Bunch, it just skyrocketed from there,” Brush said. “Just a great actor, a great guy.”

While Brush is a native of Detroit, he found Boston-native Wahlberg as someone to look up to in the city he now lives in.

“He loves so many of those Mark Wahlberg movies, I couldn’t even tell you what his favorite one is,” Kennedy said. “[Jared is] true and true a Boston guy. Even though he’s from Detroit, I know he’s a part of Boston now.”

Looking forward in the season, Brush hopes the team can continue their hot start.

“I expect us to keep grinding and trying to get more wins,” Brush said. “We’re [4-3] right now but there’s teams we can beat on the schedule, so we just gotta keep moving forward.”

The Lions face off next against Springfield College at home on March 30 at 7:30 p.m.