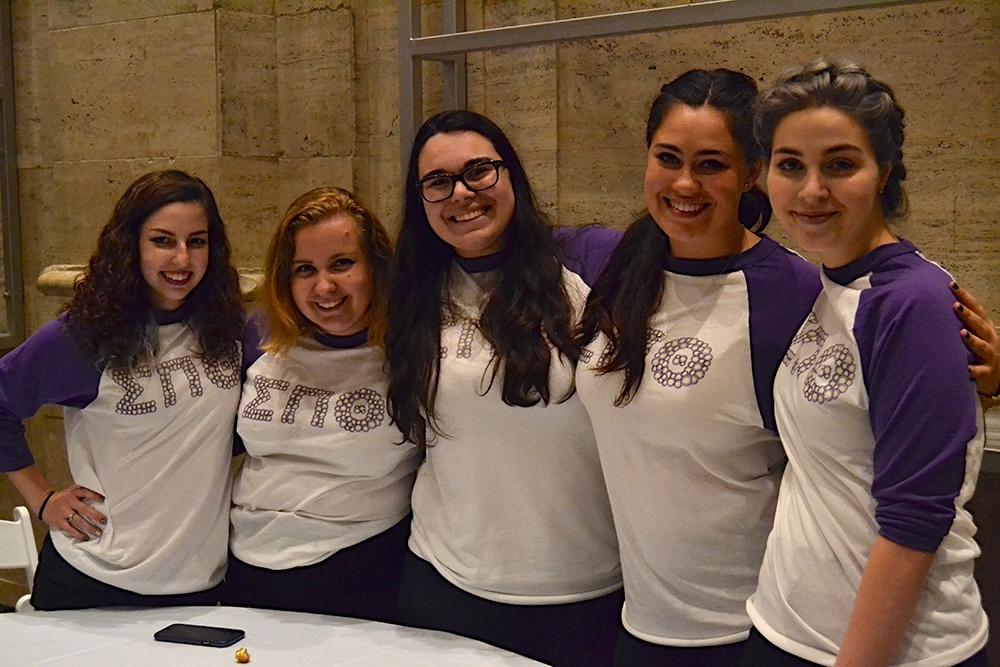 With no Greek Row, no lettered houses with house mothers, and no hefty dues, Emerson isn’t what most people think of when they think of traditional greek life.

Only three percent of the female population participate in Emerson’s Greek Life, which consists of co-ed fraternities as well as the three sororities, according to College Board. However, the sisterhoods on campus offer tight bonds, according to the sisters themselves.

Alpha Epsilon Phi, or “AEɸ,” is the lone national sorority on campus, according to Emerson’s website. This is also Emerson’s only social sorority, which indicates a focus on throwing events and participating in philanthropic organizations. Made up of 58 members, AEɸ strives to promote a strong sisterhood, according to president Rosalia Fodera.

The ladies of AEɸ could be described as being involved in multi-student organizations while managing work and internships, according to Fodera. The senior broadcast journalism major said these qualities are what initially drew her to the sorority.

“When I went to the info session and realized how involved the sisters were in things on campus and in internships, I realized that that’s what I wanted,” said Fodera.

Bella Mumma  a sophomore visual and media arts major, said that she found this connection with the sisters immediately, before she even decided to rush.

“I just felt that when I talked to the girls I had more of a connection,” said Mumma. “It’s really built on sisterhood, and that’s what I was looking for.”

In addition to on-campus involvement, AEɸ also works to support their national sorority by raising money through different fundraisers such as selling giftwrap, said Fodera.

According to their president, AEɸ is most proud of their diversity. Fodera said that AEɸ doesn’t just accept girls who are all the same.

“We [sisters of AEɸ]  are all different,” said Fodera. “We have different majors, different backgrounds. We are just completely different girls, but we have one thing in common: we’re sisters.”

Known as “Kappa” around Emerson, Kappa Gamma Chi is a local professional sorority, the only one on campus, according to the Emerson website. The 42 ladies pride themselves on Kappa’s trifold structure that focuses on sisterhood, professionalism, and community service.

“We are helping young women in college find their voice and become professional,” senior marketing major and current president of Kappa, Alaina Belanger said, “while [they are] giving back to the community and engaging in the communities around Boston.”

The professional aspect of the sorority is what really stood out to Tessa Pollock, a sophomore marketing communication major and sister of Kappa.

“I liked not only planning mixers and being sisters but also being able to feed off of connections and professional endeavors together,” said Pollock. “[It would] really help me grow as a professional woman, which is awesome.”

Kappa’s main service project each year is called Emerald Empowerment. This event started as a version of Take Back the Night, a national campaign about domestic violence awareness. Kappa used this event to talk about the importance of consent and female empowerment, according to Belanger.

In addition, the ladies of Kappa are involved with many different service projects, such as volunteering through the Big Sister association of Boston, a peer mentoring program. They’ve also hosted blood drives, and are working on setting up an eating disorder workshop open to the Emerson community for later on in the semester, according to Belanger.

“We are a sisterhood that fosters respect and love with each other,” said Belanger. “We really support each other.”

Made up of 11 active members and 2 members abroad, Sigma Pi Theta is a sorority local to Emerson, that acts as a support group to women, according to Emerson’s Greek Life website.

“Sigma’s” co-recruitment chair Allison Boudreau said that she became interested in the sorority when some of its members approached her and told her she would be a great fit. The senior writing, literature, and publishing major said that she fell in love with the sorority immediately after joining.

“[Sigma] felt like a support system away from my support system,” said Boudreau. “That was really what I was looking for. They just have a lot of fun together, which was really attractive—seeing people generally enjoying spending time with each other.”

Boudreau said that Sigma’s main focus is to empower women and help them build stronger relationships, both with other people and with the sorority. The ladies also foster a community that promotes being yourself, she said.

“I thought Sigma was the best for me,” said junior writing, literature, and publishing major, Lindsay Maher. “It’s described as a support group for women and that’s something that I’ve always looked for and never really got.”

Sigma, being the smallest sorority on campus, offers more intimate relationships, according to Maher.

“I love Sigma a lot,” said Boudreau. “I never pictured myself in Greek life.. I didn’t think I would ever have it in me to do it and I found love. It’s one of the greatest things I’ve ever done for myself.”