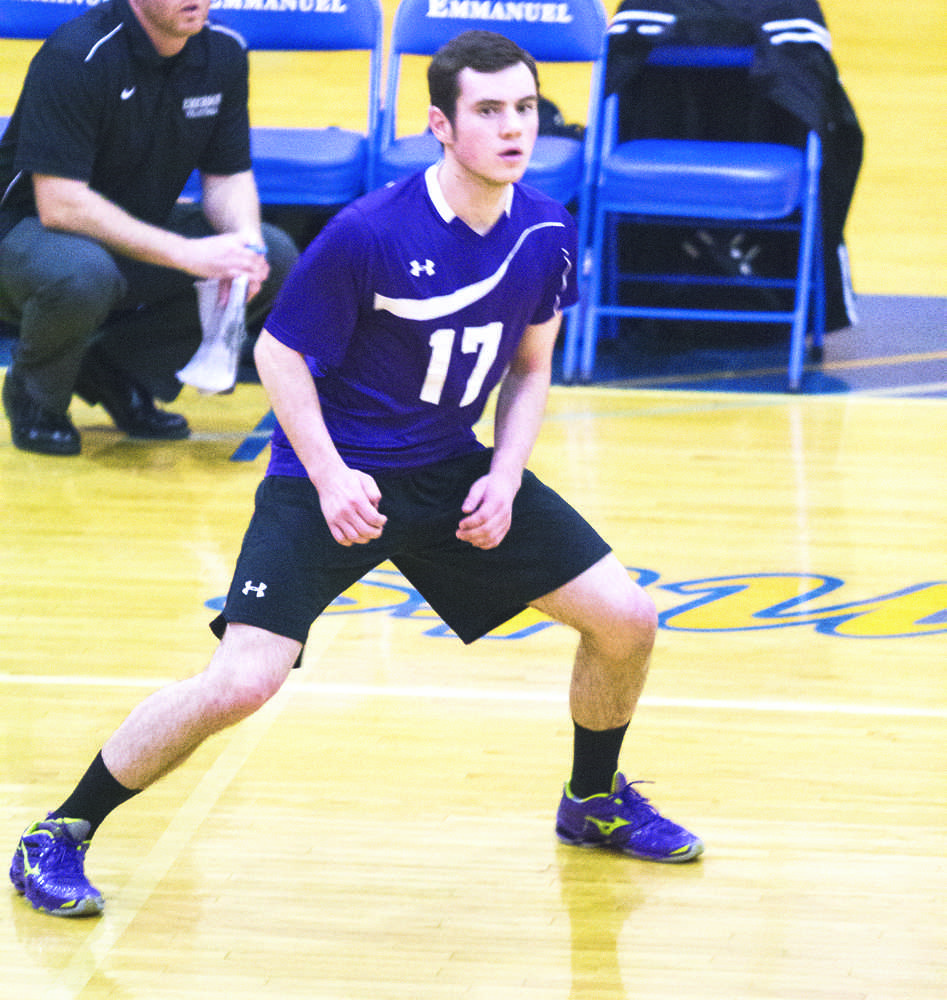 When the Emerson men’s volleyball team played nationally ranked Massachusetts Institute of Technology earlier in the year, sophomore libero Jared Gross had one of the best sequences of his career, according to head coach Ben Read.

“We had a missed blocking assignment. Ben [Hillman] went with the middle and left their opposite wide open,” Read said. “[The opposite hitter] unloaded on the ball and Jared dug it and popped the ball up. We went on to have a long rally and I think Jared dug him twice, and we ended up winning the point.”

Last season, Gross recorded 281 digs, the most of any player in Division 3. Already the top defensive specialist in the Great Northeast Athletic Conference(GNAC), Gross has shown a substantial improvement this year, at least statistically speaking. Through eight games, Gross has 93 digs which leads the GNAC, and he leads all of Division 3 with 3.88 digs per set. Gross attributes the success to his teammates and coach Ben Read’s defensive strategy.

“Coach Read has designed our defense around me this year,” Gross said. “Every team’s best hitter is funneled toward my position, so yeah, my totals have been higher.”

Gross said he didn’t start playing volleyball until the seventh grade, but was an immediate star at North Allegheny High School in Pittsburgh. According to Gross, he only tried out for the team because he wanted to prove he was the most athletic Gross in the family.

“I tried out in spite because my brother got cut from the varsity team,” he said. “So I was like ‘Oh, they’re going to cut my brother but I’m more athletic than him so I’ll try out,’ and I ended up practicing with the freshman team as a seventh grader.”

His current Emerson teammates are glad he decided to give volleyball a shot.

Jared’s personality on and off the court couldn’t be more different. On the court, his teammates describe him as extreme, but off, they say he’s laid-back.

“He’s an intense player. I compare him to Kobe when he’s on the court,” McGonigle said.

“He’s definitely more serious on the court,” said Read. “Off the court he’s got a little bit more of a joking personality.”

Read’s teams produce on the court—the women’s team won the GNAC in 2012 and the men’s team won the program’s first playoff season in 2013—but the head volleyball coach is known for his relaxed, fun approach to practice, according to his players. Sometimes, that approach can lead to some embarrassing moments for the players. Take the time Jared tried to channel his inner soccer star during practice last year, for example.

“I tried to be Cristiano Ronaldo and bicycle kick a ball over the net,” Gross said. Instead of going over the net, Gross kicked the ball right back into his own face. “Not by best idea,” he said, laughing off the mishap.

Despite his laid-back personality, Gross always seems to deliver on the court. So much so that coach Read called him the best libero in the program’s short history. (The program was first started with the 2008 school year and is in its sixth season.)

“He’s fearless on defense,” Read said. “He’s not afraid to sacrifice his body. He’s the one person out there that will throw himself all over the court to get to balls that no one besides him thinks he can get.”

When the Emerson men’s volleyball team walks into an opposing team’s gym, an unstudied eye might mistake Gross as being the Lions’ least intimidating player. That could be because, at 5-foot-9, Gross is five inches shorter than the next closest player on the team, or because Passion Pit is blasting through his ear buds. But to a trained eye, Gross is one of the best players in the GNAC, and he’s only getting better.

“If I had to describe myself as a volleyball player, it’d be focused,” said Gross. “I feel like my position doesn’t get a lot of recognition, so I just try to be the best that I can be.”

Assistant sports editor Connor Burton did not edit this story because he is a member of the men’s basketball team.