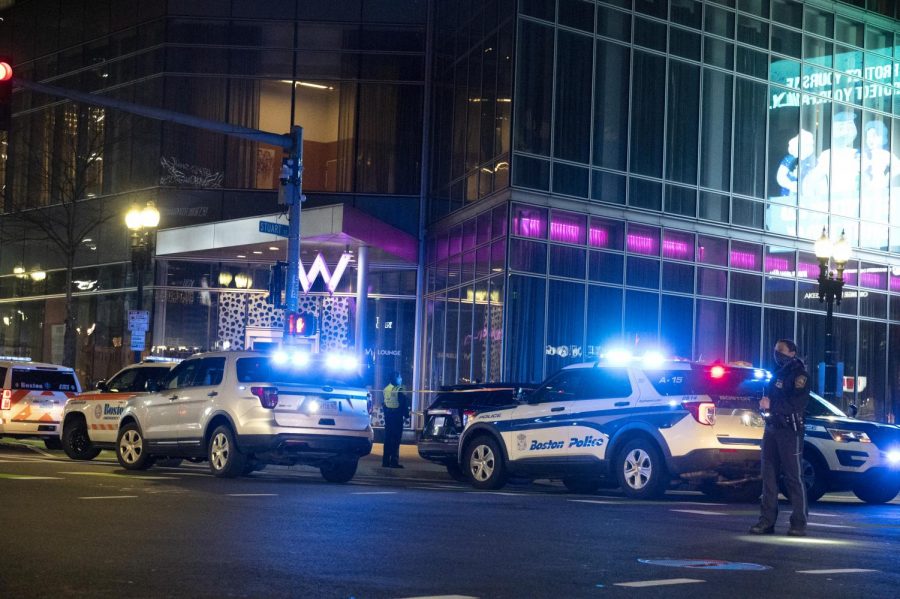 BPD and EMS respond to a situation involving a non-Emerson guest in the W hotel on Nov. 5

Boston Police and EMS responded to an emergency incident at the W Hotel involving a non-Emerson guest on the 14th floor Thursday night.

A man could be seen smashing windows with what police described as a bat or a machete, and throwing items, including multiple TVs and a chair, from his room. Police said the man was yelling about the results of the ongoing 2020 presidential election and threatening to jump from the window. A SWAT team arrived on scene, and the man barricaded himself in the room, a BPD officer said.

Traffic flow between Tremont Street and Charles Street on Stuart Street was restricted until Friday morning.

The Emerson College Police Department advised students to stay away from the area of the hotel in a community alert to students sent at 10:06 p.m.

The W is currently home to more than 200 Emerson students.

The college’s Office of Housing and Residential Education told students currently occupying the hotel to remain in their rooms until they receive further instructions from hotel staff. Student residents who were out of the building when it was shut down were instructed to wait in the lobby of 2 Boylston Place until they receive clearance from the college to return to their residence.

BPD units are stationed on top of the Massachusetts Department of Transportation building directly adjacent to the W across Stuart Street, with a view of the man’s room.

A crowd gathered on the corner of Stuart Street and Tremont Street and was engaging with the man before police pushed onlookers back.

At around 2 a.m. Friday morning, the man was still in the hotel room, covered in a blanket and smoking while police watched on.

ECPD said the incident had concluded in an email Friday at 11:27 a.m. Pedestrian and vehicle access on Stuart Street is still restricted, as BPD continue investigating the situation.

An ECPD officer was stationed in the lobby to assist community members.