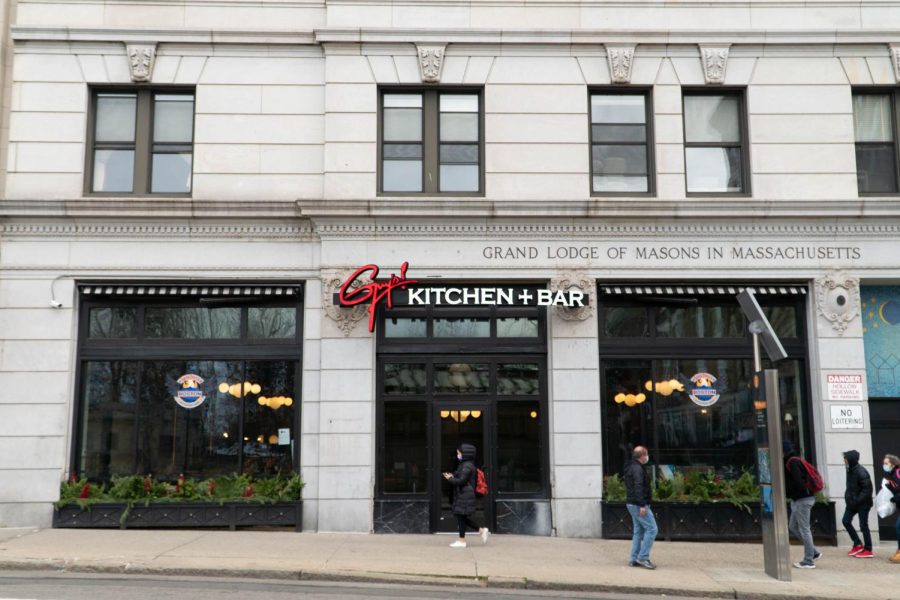 The famous slogan of restaurateur Guy Fieri will adorn the Tremont Street establishment when it opens to the public on Thursday. According to General Manager Marc Berkowitz, Guy Fieri’s American Kitchen & Bar occupies the ideal location to cater to theatergoers, tourists, and local residents alike—as well as college students from schools like Emerson.

“The first thing I thought of when I heard about [the new restaurant] was the connection with Emerson,” said Berkowitz. “It fits with students—we’re part of the community.”

The opening comes after months of renovations to the space at 186 Tremont St., formerly occupied by Explorateur Cafe. The restaurant was first planned to open in Summer 2020, but opening plans were quickly put on hold due to the pandemic; plans for a second restaurant in the space, dubbed “Chicken Guy!”, remain unclear.

Despite the prime real estate, Berkowitz said he hoped the restaurant would provide an alternative dining experience for the area.

“The price points are a little different than some of the other venues around here, a little more approachable,” Berkowitz said.

Guy Fieri’s American Kitchen & Bar is a “joint venture” with the eponymous restaurateur, who licenses his name to various eateries including a Mexican-styled restaurant, Tequila Cocina, near TD Garden. However, the restaurant will be more informal than many of its neighbors in the Downtown Crossing area, Berkowitz said—though it will remain faithful to Fieri’s famous recipes.

“It’s what we call a ‘Tuesday night restaurant’ in the industry, which means it’s very approachable,” he said. “You can get up and go any night of the week, it doesn’t take a lot of thought.”

“We take reservations, but it doesn’t mean you have to go home and change,” he added. “If you’re going to the theater, and you’re dressed, great. I don’t necessarily look at it as a ‘special event restaurant,’ where there’s a lot of thought as to how to dress.”

Berkowitz plans to not only cater to the wide variety of people in Boston’s Theater District, but also to the hundreds of college students attending Boston-area institutions. The establishment, he said, will begin accepting ECCash from Emerson students in the spring term.

Emerson Dining Services could not be immediately reached for comment Wednesday evening.

The relationship with Emerson goes deeper than ECCash, said Berkowitz, who also plans to host “Unplugged Nights” in the restaurant’s saloon—featuring college-aged artists from across the city.

Guy Fieri’s American Kitchen & Bar made its first mark on the Emerson community weeks before its opening. Isabella Cubba, a sophomore visual and media arts major, was looking for a job after Thanksgiving Break; on Nov. 30, she was walking back from a class when she saw people inside the dining room for the first time.

“I walked in and they gave me a test, and I talked to a couple different managers,” she said. “I walked out about 40 minutes later, and they said, ‘You got the job.’”

Cubba has worked in food service before. However, she said that taking a job as a server was a steep learning curve—especially for a restaurant that was just opening.

“The fact that you are opening a restaurant is a whole different ball game than walking into another restaurant that’s been open for a couple years,” Cubba said. “That’s the hardest part right now, because everyone’s trying to figure it out together.”

Cubba described a rigorous training program crammed into four days, where she and her new coworkers were given a crash course in menu listings, computer systems, and drink garnishes.

After opening Thursday evening, the restaurant will exclusively serve dinner for the next few weeks, Berkowitz said. Eventually, it will transition to a weekend lunch menu, he said.

Berkowitz added that diners could expect a prominent visit sometime during the holiday season.

“There are a number of different Guy Fieri venues [in the New England area],” he said. “But we expect to see him [here] more often than a lot of other places.”