Here’s a timeline showing how protests stayed peaceful in Boston 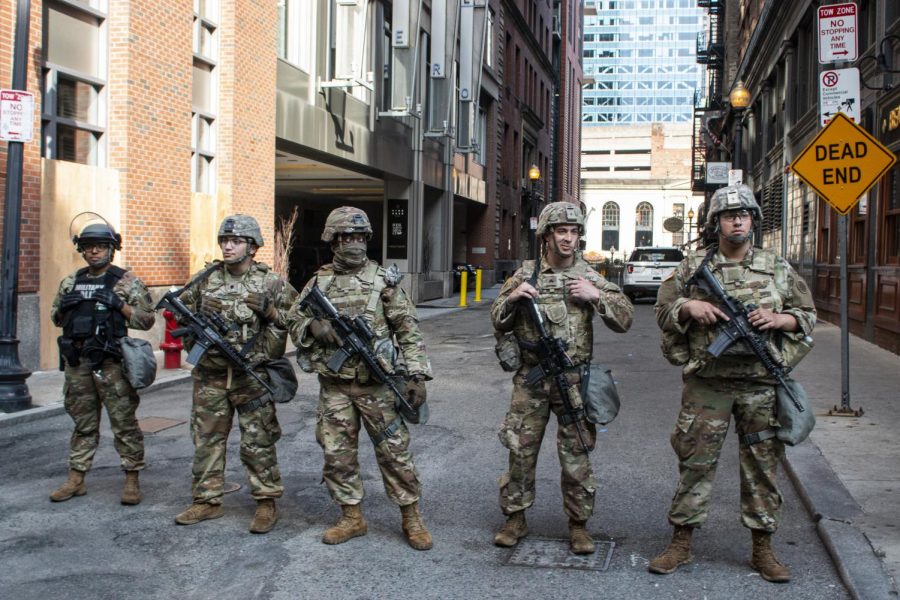 Four members of the National Guard and one member of the Military Police stood guard at the edge of Wednesday's protests.

Demonstrators rallied on Boston Common Wednesday afternoon to voice outrage over the killing of George Floyd and other victims of race-based police brutality. Below is a list of live updates from the protest. For more coverage, check out The Beacon’s complete story here.

The MBTA restored train service to normal. Most protests have now concluded for the evening in Boston.

MBTA trains are bypassing Park Street and Downtown Crossing until further notice at the request of police, according to an MBTA Twitter post.

Boston Police and National Gaurd have blocked off side streets, such as Winter Street and Temple Place, leading into Downtown Crossing from Tremont Street. A large police and National Guard presence can be seen in downtown when walking through Boston Common from the State House.

Protestors held a “die-in” on Boston Common for eight minutes and 46 seconds in honor of George Floyd’s death in the hands of Minneapolis police.

The original rally has now ended. Protesters continue to linger on Boston Common and in the surrounding area.

Matthew Burchfield, a member of the group Socialist Alternative, said he attended the rally to protest all forms of racism and injustice.

“There’s this whole nature of structural racism that is way deeper than any four individuals,” he said, referencing the four Minneapolis police officers who have been charged in the death of George Floyd. “So I’m out here because I want to continue building the movement to fight against the other injustices in our society. I definitely want to fight against police brutality. That’s the most acute form of racial oppression in this country. However, there are other forms of racial oppression.”

Burchfield said the timing of the protest helped quell fears of violence by protestors or police.

“Of course, the danger [of violence] is a lot bigger in an event like this because we know the cops have been cracking down on peaceful protests,” he said. “I was a little bit worried about it. However, I think that Yasmeen [Khader] was very smart in her choice of the timing of the protest. Basically, it was a protest lasting from 3:30 to 5, so far, all of the violence is taking place after dark. So that’s not really a possibility here.”

Derek Chauvin, the former Minneapolis police officer who has been arrested for the killing of George Floyd, now faces second-degree murder charges and the three former officers additionally involved in the killing are now also facing charges, according to new court documents.

Thao, Kueng, and Lane stood by and did not stop Chauvin as he kneeled on Floyd’s neck for nearly nine minutes while he repeatedly told the former officers that he could not breathe.

The charges come amid growing calls for Minnesota prosecutors to arrest the other three officers involved in the killing and nationwide protests.

The Massachusetts House recessed until Thursday morning as they were debating a vote-by-mail bill out of respect for peaceful demonstrations on Boston Common. Lawmakers also cited logistical concerns around potential traffic delays as a result of the protests. The House resumes its session at 11 a.m. Thursday where they will continue to make their way through 26 amendments to the vote-by-mail legislation.

In an email to students living in the college’s 2 Boylston Place dorm, Director for Housing and Residential Education Christie Anglade alerted students to the demonstration and planned disruptions to campus dining.

“Given recent demonstrations near the Emerson campus, we anticipate that this could potentially bring a high volume of individuals to the immediate area,” Anglade said. “As always, if at any point you feel unsafe, we strongly encourage you to immediately return to campus.”

The Dining Center, which has been serving take out and pre-cooked meals since March because of the COVID-19 pandemic, closed after providing lunch Wednesday. Students who planned on receiving dinner were provided with a second meal.

Resident Assistants also went door to door making sure residents were aware of the planned protest.