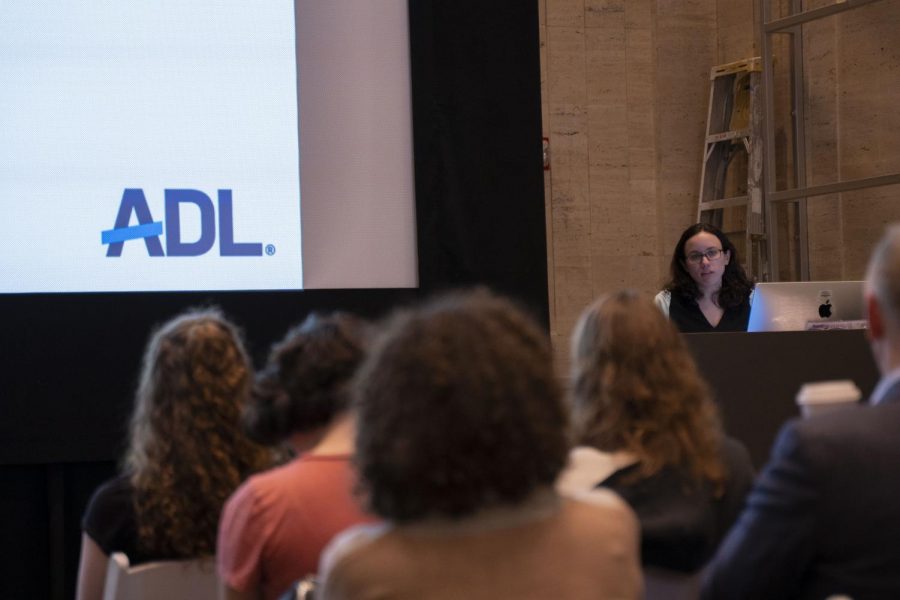 Around two dozen students gathered at the Bill Bordy Theatre Tuesday for a Hillel event with Melissa Kraus, a local social justice advocate, who expressed her dismay with the recent appearance of anti-Semitic graffiti on the college’s campus last month.

Kraus, who is the associate regional director of the Anti-Defamation League’s Boston chapter, presented an in-depth history of anti-Semitism and how it manifests in modern culture during the 90-minute discussion.

Hillel, Emerson’s student Jewish organization, put together the event in response to the four swastikas that were scrawled in a stairwell of the Piano Row residence hall on Jan. 22.

Kraus brought up the Pittsburgh synagogue shooting in 2018 and the January stabbing of five Jewish people in New York City as specific examples of modern anti-Semitism.

“It doesn’t just affect a specific community, it affects everyone,” Kraus said. “I am sure with the swastika event that happened here at Emerson, it sent a message to all the Jewish students.”

Since August 2019, Kraus has worked with the Anti-Defamation League—an organization that combats discrimination with a central focus on anti-Semitic rhetoric across communities and college campuses.

Kraus explained that the ADL urges students and individuals impacted, or those witnessing such sentiment, to report and combat anti-Semitism.

“It is important to speak up—which I think this community has done in response to the Swastika incident,” she said. “They have called it out. They have made statements to the media so that a lot of people know what is going on.”

“Regretfully, I am writing to inform you about an incident of hateful graffiti that marred our campus last night when four swastikas were found scrawled in stairwells at Piano Row,” he wrote in the statement. “The graffiti was removed immediately.”

Melissa Bordelon, president of Hillel, said she wanted to organize the event with Kraus to help students process the vandalism by providing a space for those impacted to discuss it.

The senior said it was extremely difficult for her to read Pelton’s email with the news.

“While I do think that our school’s administration and President Pelton handled it very well and I felt extremely supported and cared for, it was obviously not good news to hear,” she said in an interview.

Bordelon said she wanted to focus on fostering a supportive Jewish community so they could heal from the hateful graffiti. She said she felt as if the Hillel event was the best way to reach out to the community.

“We wanted to not just have spaces where people feel comfortable, but actually have something like this,” she said. “Host a talk, have a teach-in, or something, to make people feel more seen and heard.”

Sophomore Leah Thomas, a member of Hillel, said she wanted more events that reach members of the Emerson community members outside of Hillel.

Thomas said she hopes the events will engage those outside the Jewish community and will encourage them to play a more active role in combating discrimination.

“That is the nature of what we are dealing with,” Thomas said. “People are here because they care, but other people are not going out of their way to learn. To a certain extent, it is kind of our job to say that it is important.”

Although Bordelon said the vandalism saddened community members, both inside and outside of the Jewish population, she told The Beacon that combating the hateful sentiment is the only way to rise above it.