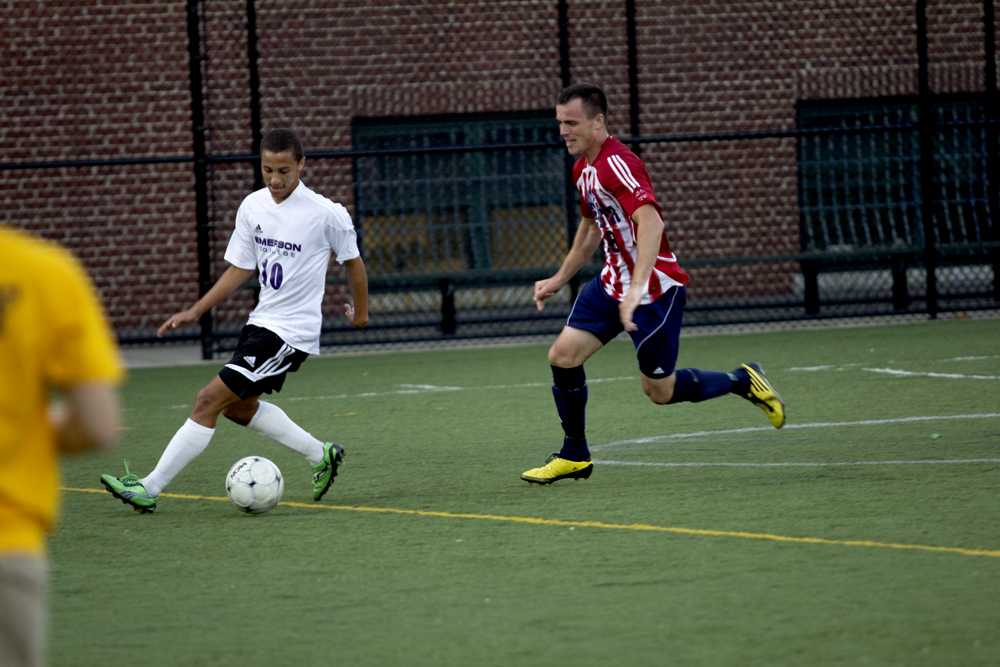 Emerson men’s soccer defeated Saint Joseph’s College of Maine 3-0 on Saturday for the first time in school history after a commanding performance by senior Jacob Lawrence.

The Lions jumped all over the Monks 20 minutes into the Great Northeast Athletic Conference quarterfinal match and scored three goals in 10 minutes. Lawrence assisted on two of the goals and bagged one of his own in the flurry.

Head coach Jared Scarpaci said the historic win was spurred on by Lawrence’s goal, which was blasted into the net from long range to put the Lions up 2-0.

“He ripped one in for the second goal, which was great because that really put us up with some confidence,” Scarpaci said. “He had a breakout game.”

Scarpaci said that staying on the offensive and not backing down was key to defeating the Monks.

“We could have gone into a defensive mode, but we didn’t,” he said. “We played our game…We kept the ball down in their end.”

The game was exciting both for players — who Scarpaci said had to overcome tough circumstances to earn the win —  and for alumni, from whom Scarpaci said he received many calls and texts after the game.

“The odds were clearly against us,” he said. “We don’t travel long distances very well; it’s a team we had never beaten; and it’s a team that four years ago knocked us out of the GNAC finals.”

The win means Emerson will leave the GNAC having defeated every team in the league.

But the Lions’ playoff run ended last night in the semifinals after a hard fought 1-0 loss to second-seeded Albertus Magnus College.

According to to Scarpaci, the team’s exit from the Great Northeast Athletic Conference was satisfying.

“We are leaving this conference on a positive note,” Scarpaci said, “and I think the guys are excited about that.”