The Berkeley Beacon • May 4, 2020 • https://berkeleybeacon.com/houston-recognized-for-leadership-off-the-court/

Houston recognized for leadership off the court 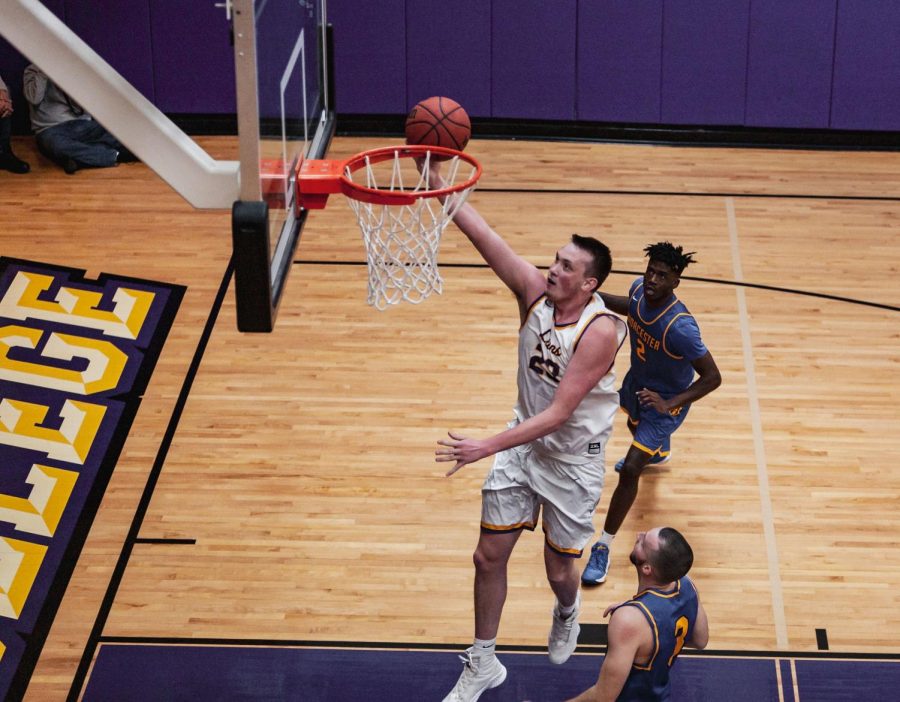 When he wasn't competing on the court as a member of the men's basketball team, Houston worked as an RA in the Little Building

Men’s basketball center Jarred Houston was scrolling through Twitter on April 9 when he found out he earned the Emerson Recognition and Achievement Student Leader of the Year Award.

“This means a lot because of the amount of work I put in and how much I try to impact the Emerson community overall,” Houston said in a phone interview with The Beacon. “It means a lot to be recognized for it in general.”

The Student Leader of the Year is one out of 10 ERA awards given to specific groups and individual students that show certain leadership and excellence qualities during the academic year. The Student Engagement and Leadership office created the awards to highlight the many achievements of the Emerson community throughout the year.

Houston said one of the ways he displays leadership as a teammate is by maintaining a positive attitude to help motivate the Lions.

“One of the things that I value most is having a good time, and I think in order for people to get stuff done, there has to be something fun involved,” Houston said. “People are much more receptive to things if they are having fun while doing it.”

Houston said there are some areas he could improve on as a leader, expressing a desire to be more vocal and assertive.

Houston said Geoffrey Gray ‘19, the team’s captain during Houston’s freshman year, is his role model on the court.

“He was always leading us and showing us what to do, and he made sure everyone was doing what they were supposed to be doing and being held accountable,” Houston said.

Head coach Bill Curley said Houston possesses all of the right qualities to be an active leader.

“He is fearless, enthusiastic, and he tells you how it is,” Curly said in a phone interview with The Beacon. “His actions are done purposely and for the good of his teammates.”

Curley said Houston is a team player, and his actions are never selfish.

“The best thing about Jarred is that he always wants to be part of the group because he knows that he is part of something bigger than himself,” Curley said. “It’s never his way or the highway. It is his personality that shows that there are more people than just him and that he can make the world a better place.”

Houston said his leadership also extends beyond basketball. For the short time students lived on campus during the spring semester, Houston worked as a Little Building resident assistant.

“Coming in as a freshman can already be hectic because you are kinda thrown in this whole mess that is going on, and I wanted to be a positive source for them to keep their spirits up and help them enjoy their first year of college,” Houston said.

“They do a great job on spotlighting what we should be doing and they are really helpful and overall they are easy to talk to,” Houston said. “They have helped me become a better leader overall.”

After meeting Houston during RA training in August 2019, Locklin said her first impression was that he is a gentle giant who is enthusiastic about his job. Locklin recommended the 6’10” student athlete for the award.

“Jarred has this ability of really working with anyone,” Locklin said. “They can be the quietest person on our team to the highest energy filled person, but he’s got this ability to flow his energy to his teammates and he is very in-tuned with other people. Sometimes he sits back and lets others take the lead because he sees everyone’s strengths.”

“The thing I can’t stress enough about Jarred is how genuine and calm he is,” Locklin said. “I’ve never met anyone like him. He has this big brother kind of energy with everybody and everybody enjoys being around Jarred.”