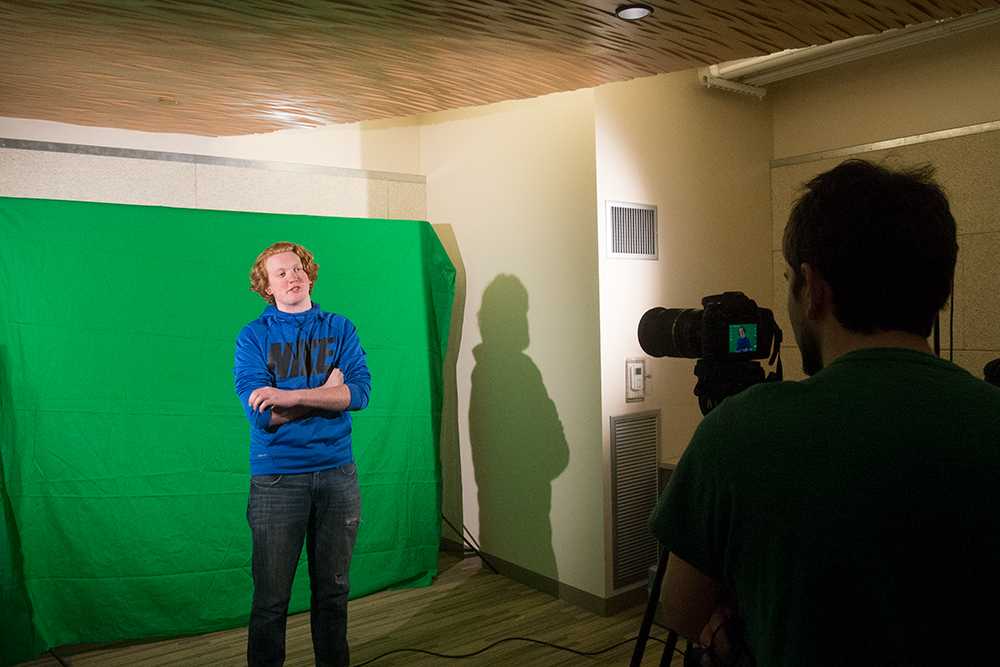 Students of Emerson gives students a chance to share their personal stories.

The bright studio lights, green screen backdrop, and 70D Canon camera transformed the Colonial Building’s eighth floor common room into a makeshift photography studio. To those who attended the Students of Emerson event, however, it was more than just a photo shoot.

The occasion was an homage to Portraits of America and Humans of New York, documentary-style photo sites, and it aimed to provide a playful setting for students to share  personal stories and get portraits taken. The event began at 10 a.m. and ended at 1:30 p.m., and the student portraits, along with personal descriptions, will be published online this Friday, October, 21 through the Event’s Facebook page or a separate website page.

Portraits of America and Humans of New York are online blogs that post photos of random people along with a short story each person shared. Both blogs strive to illuminate the experiences of a community’s citizens in a simple, honest, artful format. Both series document subjects spanning from people who identify as asexual to those overcoming insecurities or chronic illness.

Trevor Howell, a junior visual and media arts major, and Joey McManus, a senior visual and media arts major, who are both residential advisors, organized and headed the Students of Emerson event. Howell was inspired by his interaction with Ivan Velinov, the creator of Portraits of America, and wanted to bring his experience to the Emerson community during the midterm season.

Howell and his friend met Velinov last year on the subway in Boston. Velinov took Howell’s portrait and published it online, along with four words of Howell’s response to the question, “What kind of views on life do you have?” which was, “I like to fail.”

“He made us feel like we each had stories to tell,” Howell said. “Even though he only posted four words I said, the four words said more than a hundred words I could say to a group of strangers.”

From there, Howell had the idea at the beginning of this school year to create a similar project specific to Emerson.

McManus heard about the event through his boss and thought Howell’s project was a great idea. McManus wanted to be involved in something that allowed people to be more positive in their self-awareness of self-care and offered to help out.

For a little over three hours, Howell and McManus welcomed Emerson students to have their portraits taken and respond to some of the prompts they’d prepared. The prompts included “What’s your favorite place to go in Boston?,” “What do you do to de-stress?,” and “Who can you always rely on to talk to?” Participants were free to share anything beyond the prompts.

Around ten people participated in the event. Some learned about the event through social media, but others were passersby who were curious to see what the studio set-up was about.

Kate Casner, a freshman marketing communications major, said she thinks events like these are important because it helps the students who feel marginalized realize that they’re not alone.

“A lot of people might feel secluded because of mental illness and stuff like that,” Casner said. “But a lot of people deal with it and that’s important to know.”

Meghan Corless, a junior visual and media arts major, was another participant. She gave an account of how much her mother means to her and how she aspires to be just like her. Though Corless said that being in the spotlight was uncomfortable at first, speaking about something she felt strongly about put her at ease. She said the Students of Emerson experience was very valuable.

“I feel like everyone’s story is really important to share,” Corless said. “And I can’t say that without sharing my own.”

Although the Portraits of America and Humans of New York blogs document strangers in public places, Howell and McManus kept the project within the Emerson campus to make it more accessible to students. They relay that having the event in the Colonial common room could encourage those who are more shy and introverted and said it was important to give every student in their community a shot to share their voice.

“I think a lot of people at our school and at our country are not feeling heard by their government, the people they’re close to, their teachers, and their residents sometimes,” McManus said. “It’s important to give them a platform to speak.”

Howell agreed with McManus that “giving voice to the voiceless” is a part of journalism.

Howell hopes that, once published online, the Students of Emerson portraits can be a way for Emerson students to relate to one another and identify with the rest of the school community.

Howell is not sure whether he will hold future Students of Emerson events again. He says that if he does continue the project, portraits would be spontaneous and at random places, not at a fixed event.