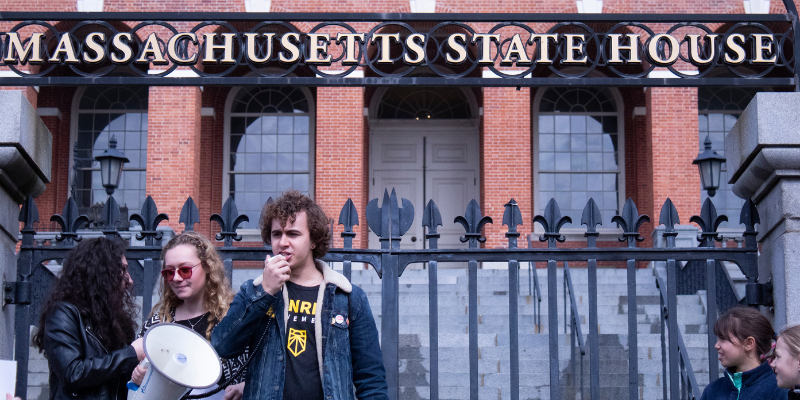 Hundreds of students and protestors gathered at 11 a.m. outside the State House on March 15 for the Massachusetts Youth Climate Strike.

The protest was just one of thousands of other youth-led climate strikes that occurred across 100 countries and most of the U.S. as part of the first international climate strike. Youth climate change activist Greta Thunberg of Finland organized and championed the larger Global Climate Strike for Future in response to recent climate change-related science.

The organizers intentionally planned the rally during the school day so students in Massachusetts would miss class to strike, according to the event’s official Facebook page.

With classes proceeding as usual in Boston Public Schools, high schoolers read demands, speeches, and poems through a megaphone on the State House steps.

Molly Niedbala, a substitute teacher for Boston Public Schools, spoke at the event to show support for her students.

Police blocked off portions of Beacon Street to accommodate the crowd that pressed against the Bulfinch entrance to the State House. Students with signs made out of cardboard or papier-mâché reading “Support the Green New Deal” and “Eat The Rich” chanted “Hey hey, ho ho, climate change has got to go” accompanied by a small brass band.

Senior Kristin Lemley said she came to the strike on her lunch break to support local action and state-level change.

“I think with the current administration, at the federal level, nothing is going to get done,” Lemley said in an interview while in the crowd of protestors. “So, it really is up to the states to do stuff. And on a local level, these people are going to be constituents, so hopefully, it helps them learn to act.”

The organizers encouraged the protestors to lobby their local lawmakers from the Massachusetts State Legislature to vote for climate change bills and were let into the State House 10 at a time to visit their representatives.

Griffin Gould, a junior at Arlington High School, organized the strike and the lobbying session with Massachusetts Climate Strike, the organization behind the protest.

“The whole idea behind the strikes is … how can we even think about going to school when there’s this gigantic impending crisis,” Gould said. “So we take today to demonstrate our frustration with the inaction of our government in terms of climate control.”

Gould said organizers planned the strike and the lobbying session in tandem to make the most impact on lawmakers.

“The strike is great to tell the public why we’re here, what we’re doing, and that we care,” Gould said, “When lobbying is in tandem with [striking], that’s how you make change. It’s complementary.”

Governor Charlie Baker introduced a bill in January with the intention of upgrading the Commonwealth’s infrastructure to adapt to climate change. It joins many other climate change bills sitting in committees in the Massachusetts State Legislature.

Governor Charlie Baker’s office could not be reached for comment.

Vice Chair of the Joint Committee on Revenue and Democratic Sen. William Brownsberger of Belmont said the bill has not moved out of committee for three months because the members are newly appointed.

“I’m sure that it will get a timely hearing and serious consideration as the session moves forward,” Brownsberger said in an email to the Beacon.

Three other members of the Joint Committee on Revenue could not be reached for comment.

Sophomore Jack Cornish said he protested in front of the State House to support the younger generation of organizers.

“It’s important that they understand how important this is,” Cornish said. “It’s going to inspire those younger generations to keep doing stuff like this even when they don’t live in Massachusetts.”