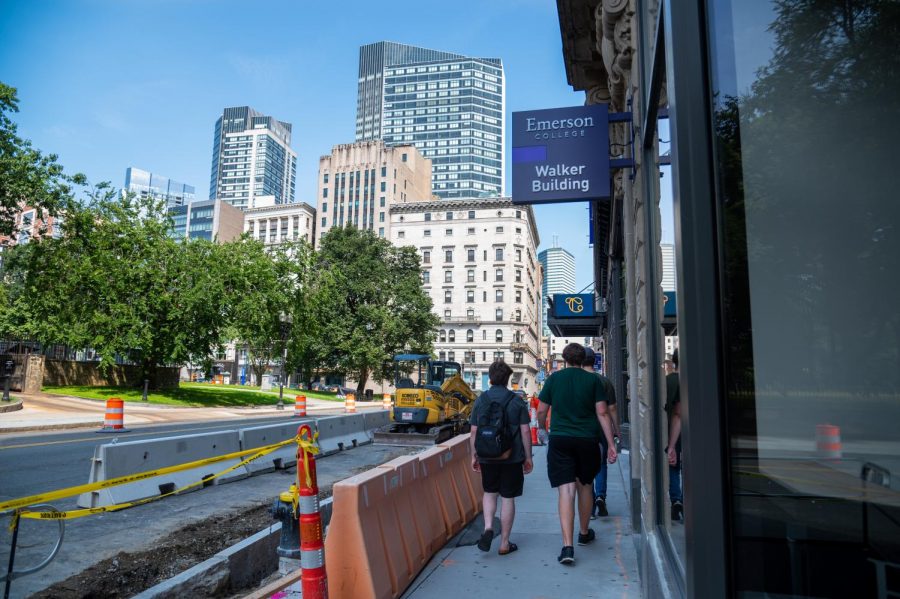 The view of Tremont St. from Emerson's Walker Building.

Last semester, visual and media arts major and rising senior Isa Moon served as president of The Girlie Project comedy troupe as she prepared for her final year at the college, the spring semester of which she hoped to spend at the Los Angeles campus.

Then, the COVID-19 pandemic struck. With case numbers surging again in the U.S. and a weakening economy, students are facing a difficult decision. They can enroll in fall semester courses via the college’s hybrid learning plan, opt for online-only classes, or, as some students are choosing, take a leave of absence.

For Moon, taking a leave means giving up her role in the comedy troupe and her last semester on the Boston campus, as she is still on track credit-wise to graduate in the spring.

Under Emerson’s new hybrid reopening plan for the fall semester, there could be a potential upward trend of students taking leaves. The increase would contribute to the massive financial losses the college anticipates for this upcoming year.

President M. Lee Pelton cited “some students electing not to return to the college in the fall term” as one of the factors affecting the projected $33-76 million financial losses in the 2020-21 academic year in a July 10 announcement. Administrators have already planned a round of $26 million in mitigation efforts.

Enrollment data, however, so far seems not far from the norm. Carol Smolinsky, director of retention and student success, said in an emailed statement that the number of students taking a leave of absence this fall so far is not much different from last year. But she said the college expects the data to look different by the time the semester begins.

“We usually see a clearer picture of how fall semesters will shake out toward the end of August (when most leave requests are filed/finished up and most students requesting to return from a leave have completed their requests as well), and I expect this year to be the same,” Smolinsky said. “While the policies and the request form are available on our website, we find that individual conversations with our staff can help to either find resources/support to remain enrolled, or to ensure a smooth exit and re-entry process.”

Smolinsky declined to provide The Beacon with current or past data on students taking a leave of absence.

Emerson’s policy allows undergraduate students to take leave from the college, opting out of all classes, housing, and extracurriculars, for up to two years for either medical or personal reasons, according to the college’s website. These students can be readmitted through the Office of Student Success after their leave ends, rather than having to reapply to the college.

Students can choose to take a leave of absence at any point during the semester. The financial implications, such as tuition and fee reimbursements and financial aid adjustments, vary depending on the timing of the student’s departure.

Students who elect to take a leave “are not eligible to participate in varsity or intramural athletics, student clubs, student employment, or any Emerson-sponsored activity or organization,” according to the college’s website.

Emerson’s recent announcement that tuition costs will increase by 2 percent for the upcoming academic year amid soaring unemployment rates has also proven a reason for some students to take leave.

Senior marketing major Megan Ellis said the financial burden of the pandemic and the college’s tuition made enrolling for classes this fall impossible for her. Ellis originally planned to go to the Los Angeles campus this coming semester, but since all internships and classes are likely to be online, at least in the beginning of the semester, she said she and her family couldn’t justify the cost of the program.

“I want the full experience, and if I can’t get that, I would prefer to just wait it out,” she said. “We think it’d be better for my future to take a semester off, because I can also work and save money in that time.”

Ellis added that the current economic landscape may make it harder to secure a job. She has taken out loans to finance her Emerson education and said she wants to maximize her chances of employment after graduation.

“If I’m going out to LA. I want at least a better possibility of maybe getting a job out of it,” she said. “California is such a hotspot for COVID right now. How likely are they going to be to be hiring in a couple months?”

Other students are choosing to take a leave out of fear of contracting or spreading COVID-19, like junior VMA major Owen Plofker. Plofker said that while he was unsure of returning to campus even back in March, Harvard’s decision to bring only 40 percent of its students back to campus and hold all classes remotely pushed him over the edge.

“I really was not comfortable risking it, because I also have people in my family who have autoimmune disorders, and it would not be okay at all if I brought a virus home,” he said. “The totality of everything going on totally eclipsed any sort of college experience I feel like I’m missing out on.”

Leaves of absence pose a unique difficulty for international students, who must go through the Office of International Student Affairs before formally filing their request for a leave. For those students, taking a leave can mean compromising the status of their student visa, OISA Director Andrea Popa said.

“OISA advises the student directly on immigration considerations (what immigration documents are necessary to return to the US after a leave, when a new visa is necessary, and how a leave might impact US work permission…” Popa said in an emailed statement to The Beacon. “International students have faced several significant factors this year that may have impacted their decision to take a leave, but the process itself has not changed.”

New Immigration and Customs Enforcement guidance does not address the five-month out of country rule, which typically only allows a student to maintain their visa for five months while out of the U.S., making leaves for international students a huge risk.

In a July 24 email, Popa warned international students who take a leave in the fall to plan to fill out new visa documents in order to return to Emerson in later semesters.

Popa said many factors are currently complicating international students’ planned returns to the U.S., further incentivising those students to take leave. Services and reopenings of U.S. consulates have been curtailed; the visa process is expected to backlog following the suspension of routine visa services; and varying levels of travel restrictions are in effect in different parts of the world.

She said some international students have requested leaves, but the college is offering other options for the fall semester specifically to international students. Students in the U.S. or wishing to return early were able to obtain free on-campus housing for the summer. Students unable or unwilling to return to the U.S. can attend one of Emerson’s global partner institutions, such as Franklin University in Switzerland or the Paris College of Art. The classes offered at these programs vary heavily by institution, and not every class is offered at every institution.

Isabelle Hung, a senior communication studies major from Taiwan, said she decided to take a leave of absence because of how volatile travel restrictions and policies are in the U.S. A gap semester made the most sense for her, she said, because the online classes offered in the fall could not fulfill her remaining major requirements, and the severe time difference would have made online learning difficult.

Travelling back to the U.S., Hung said, would have also been a huge hurdle, as she said there are significant visa delays, and multiple transfer airports aren’t accepting any travellers from Taiwan. She added that although OISA tried to help international students navigate their unique, evolving situations, there simply weren’t enough staff members to match the demand.

“It was practically impossible to make any plans or decisions on whether I should travel back to school, should I be taking online classes and what can I do if there’s another rise of the pandemic,” Hung said in an emailed statement to The Beacon. “It almost felt like we’re a puppet that’s hanging, and there’s nothing we can do beside being thrown from this department to another.”

Moon and Ellis also voiced frustration with what they view as the college’s silence surrounding leaves of absences, when coming to campus could have potentially deadly ramifications.

Emerson is a heavily tuition dependent institution, according to college tax forms. In 2019, about 89 percent of Emerson’s $264 million revenue came from tuition and housing charges.

“I’m disappointed that they haven’t made students feel like a leave of absence is a real option that makes sense,” Moon said. “I think the reason that it’s so upsetting and there’s so much pressure behind the decision, is they’ve heard nothing from the school, the people who are supposed to be giving them some sort of form of guidance.”

Ellis echoed that sentiment, adding that the college’s optimism about returning to campus feels somewhat tone-deaf to her.

“I was getting emails from people at LA telling me that, like, ‘You’re going to be taking online classes and probably doing remote internship, but you can still make the best out of it’,” she said. “It’s not students’ responsibility to pay full price for something that’s of lesser value, and it’s not on them to make the best of it.”

Others taking leaves are trying to avoid restrictions on their college experience. Olivia Nugent, who would be a rising senior and VMA major with a concentration in sound design, transferred to Emerson in 2019 as a junior.

“I already got a cut off year last year—I really want to get as much out of Emerson as possible,” she said. “If I went back this semester, I don’t even know if they let us do productions, because they haven’t really said anything much about that.”

Nugent, who was a member of the Acappellics Anonymous group, said she struggled with online classes in the spring and didn’t want to have her life upended again by college decisions if the pandemic worsens. She plans to take a few remote community college classes at her home in Rhode Island and is searching for a remote internship.