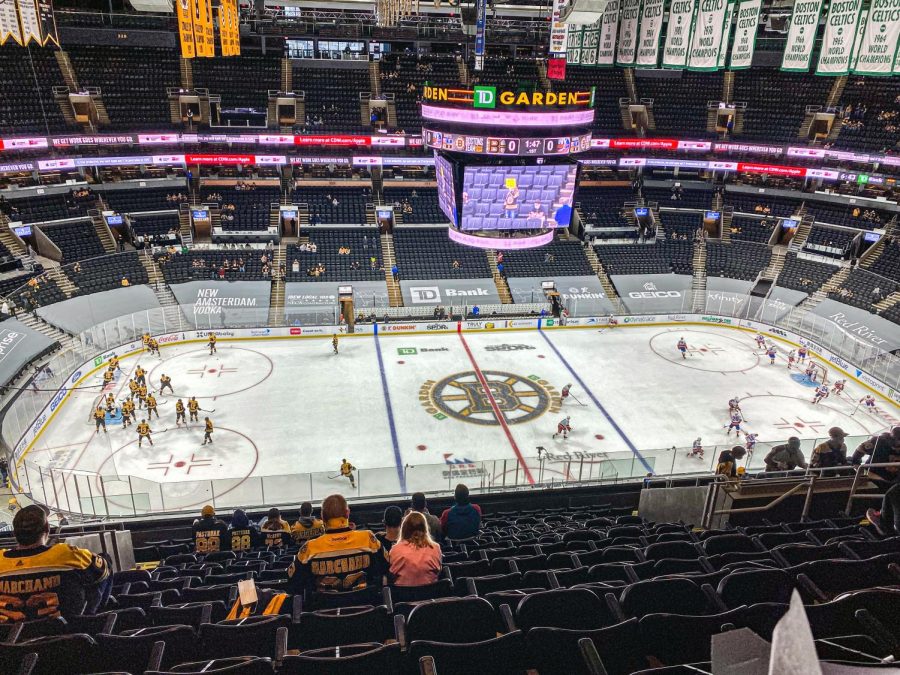 TD Garden allowed a limited number of fans into the arena last Thursday to watch the Boston Bruins host the New York Islanders for the first live sporting event in Boston in over a year—and I was lucky enough to attend.

Although the Bruins fell to the New York Islanders 4-3 in overtime that night, the score isn’t what stuck with me. Rather, it was the experience of attending a game with new health protocols in place to limit the spread of COVID-19 and keep fans safe.

When I first read that Massachusetts was moving into Phase 4 of reopening and allowing 12 percent capacity to fill sports venues beginning on March 22, I was a bit skeptical of the experience. The thought of being at TD Garden with only 2,142 fans for a Bruins game instead of the 18,624 capacity that the arena can hold on game day made me imagine that the energy would be dull. Nevertheless, it had been over a year since I last saw live sports, so I purchased tickets the Tuesday before the game.

I soon found out that fans are hit with the new COVID protocols before ever stepping foot into the Garden. I initially wanted to purchase a single ticket for the game, but tickets are only sold in “pods” of two or four as part of the Garden’s “Play It Safe” commitment. Knowing I couldn’t go alone, I called up three of my closest friends and purchased tickets for them as well, and they were just as excited as I was to be attending a sporting event again.

Before the game, fans are required to download the TD Garden Hub app, where they can store their mobile tickets and agree to the “Play It Safe Promise.” The promise outlines that fans must not have tested positive for COVID-19 within 10 days leading up to the game, must wear a mask at all times when not eating or drinking, physically distance while in the arena, use hand sanitizer and wash their hands, and must use the arena’s touch-free services for ordering food and drinks.

Once fans virtually sign this form, they’re clear to make the trip to Legends Way. My friends and I took an Uber to the arena, and we were assigned to enter from a designated gate determined by the section we were sitting in. Instead of ascending up the escalator to enter the arena like I had done countless times before, my group had to walk around the west side of the building, show our form to the employee in charge of checking them, and enter from there.

The walk up the stairs to the balcony of TD Garden was eerie, to say the least. My friends and I were the only fans in sight as we made our ascent to the top of the stadium, compared to the thousands of fans I’m used to entering and exiting the game with. The two sides of the stairs were roped off to separate departing fans from those who were entering the arena.

Once we made it to the balcony, I was relieved to see other fans walking around the concourse, ordering food and drinks as usual. Unlike my premonition that the experience would be weird with a limited number of fans, it was more like a breath of fresh air. The concourse wasn’t packed with people like it typically would’ve been in pre-pandemic days, and the lines to use the restrooms and order food and drinks were relatively short as well. That was certainly a first in my 20-year experience of attending professional sports games.

I got goosebumps walking through the tunnel leading to Section 317 as we made our way to our seats in the last row of the arena and saw the ice for the first time. I was actually about to watch hockey in person, and I began to feel incredibly grateful to be one of the first 2,142 fans in the city to attend a game. That’ll be something cool to tell my children when I’m older.

Every seat that wasn’t sectioned off into pods of two and four was roped off, so it was calming to know that fans couldn’t move to any seat they wanted throughout the game and possibly spread the virus. The best thing about the sectioned-off seats, however, was that there was actually LEG ROOM at a professional sports game! That never happens, so I was ecstatic to stretch my legs for the entire game.

The only negative thing I can say is that I noticed a glaring loophole for fans to avoid COVID protocols: if you’re sipping on a drink the entire game, you rarely have to wear your mask. My friends and I made sure to wear ours the whole time, but I was especially freaked out by the man in front of me who was drinking beer throughout the game and claiming he could do “whatever he wanted” because he received both doses of the COVID-19 vaccine.

TD Garden and its staff did a great job at keeping fans safe. Besides the instance with the man in front of me, I never felt unsafe, and I thoroughly enjoyed my time in the arena. I highly recommend attending games this season if you can. It’ll be safe and a blast.