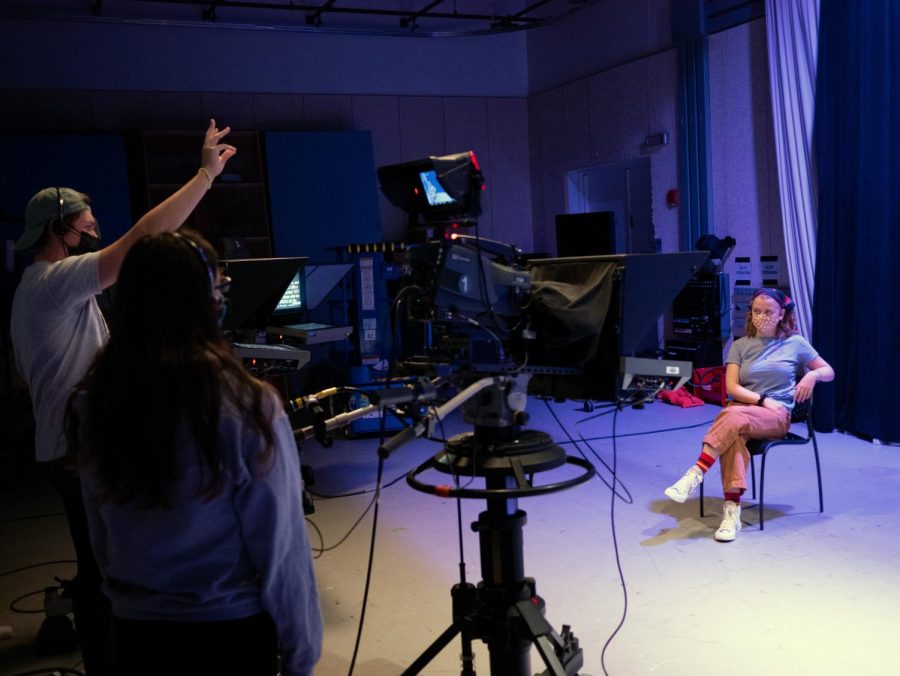 Students working on a set in a visual and media arts course.

In junior Ava Petrecca’s BFA Acting Studio 1 class, she’s learning the Alexander Technique: a focus on posture and body movement that aims to increase self-awareness. Professors usually assist students by touching their bodies, guiding them to the right technique. New COVID-19 limitations require community members to stay six feet apart from one another, so Petrecca’s professor found a workaround.

“Since we can’t really touch each other, she bought these little almost retractable selfie sticks, and she glued those tiny little hands onto the end of them, and she adjusts our bodies in a socially-distanced way,” Petreccca said in a phone interview. “It’s different than what we would normally be getting, but I think it’s a lot better than what I expected.”

The Performing Arts and Visual and Media Arts Departments are uniquely challenged this semester to transform hands-on, experiential courses into material that can be delivered over Zoom or in person with masks and social distancing measures. Though many professors and students said they were at first apprehensive of a reworked curriculum, most said their concerns have been quelled by the first few weeks of hybrid instruction.

“I have been pleasantly surprised so far with the hybrid system,” junior theatre and performance major Anna Kosiarek said. “The work is very touchy-feely sometimes—we can really get close to one another and use our bodies… I miss that aspect of it, but besides that, I feel like I am getting a worthwhile education.”

Theatre classroom spaces have been marked with boxes for students to stand in, ensuring they do not violate social distancing rules. To de-densify classes, many theatre courses are being held in on-campus performance spaces, like the Colonial Theater, the Paramount Theatre, and the Cutler Majestic.

Prop director and professor Ryan Bates’ prop construction class is held in the Paramount Center, which he said gives his students plenty of room to spread out during upholstery or casting and molding projects. To avoid too many students sharing tools, Bates prepares all necessary materials before class. Any shared tools are sanitized between use.

“I’m in the mindset of having to prep so much that I’m feeding them more information maybe than I normally would, as opposed to encouraging them to figure certain things out on their own,” Bates said. “There is still some sort of discovery to be done there on the part of the students, about, ‘If I fold the fabric this way then I get a better outcome than if I do it this way,’”

Kosiarek said her professors have planned their curriculum effectively to account for the hybrid learning structure. In her advanced acting class, Languages of Love, she said her professor assigns script analysis for Zoom classes and saves scene work for in-person sessions.

“This whole pandemic has just been basically a giant experiment for us theatre majors to approach the work in a new way,” she said. “To really combine the work with this circumstance so that we can create something completely new and that’s never been seen before—because this has never happened before.”

Improv professor Holly Tarnower said she’s developed games specifically for virtual learning. To practice miming work, students interact with an imaginary item on camera that other students have to guess.

Another game, which Tarnower calls “Speech Dub,” involves one student turning off their video and reciting a speech, while another student mutes themselves and mouths the speech. She saves scenic games for in-person classes.

“It’s weird, but it’s adaptable,” Tarnower said. “And it needs to be.”

The primary downside to Zoom improv, Tarnower said, is the absence of a live audience.

“You don’t have the validation of people laughing,” she said. “You want people to learn not to just play for the laughs and stuff, but it definitely changes the energy.”

VMA curriculum has also been adapted. New VMA COVID-19 production safety guidelines released by the college requires all production crews and student work groups to have a designated “COVID captain,” who is supposed to ensure the whole team is following the safety protocols. The Equipment Distribution Center, used extensively by VMA students, is only open for pick-ups on Thursdays and Fridays.

On sets themselves, hair and makeup can only be done by actors themselves, and no production is permitted in Emerson residence halls.

“I couldn’t figure out a way to film in a bed, which is so ridiculous because that would have been the easiest place to shoot in last year,” junior VMA major Devin Elias said. “It’s really weird to hear a directing teacher be like, ‘Oh yeah, just shoot it outside.’”

This wasn’t Elias’ only hindrance. During his directing image and sound class, his partner had difficulty setting up the camera, and nobody else was allowed to touch it due to sanitation guidelines.

Bachelor of Fine Arts production professor Julia Halperin said COVID-19 restrictions have disrupted her students’ processes and have been discouraging. However, she said none of her students have dropped out of the program, and that staying tenacious through difficult circumstances is an important skill for filmmakers to learn.

“My students are coming up with some very creative ways to reimagine their stories,” Halperin said, noting another student who is considering changing a large classroom scene to animation. “It’s a reality of media production that you aren’t going to have all the resources you want.”

Despite the difficulties, Elias said this semester has proved his most inventive. The semester has given him more time to take long walks around the city, where he said he comes up with his best ideas.

“I wouldn’t really have as much time for that in previous semesters,” Elias said. “It’s, weirdly, made me more creative.”

Some of the normal assignments for Elias’ directing class were cut due to students shifting to fully online learning after Thanksgiving break. Some professors, however, like Introduction to Studio TV Production professor Wilson Chao, arranged the curriculum to start production earlier out of fear the semester would be cut short again.

To produce shows, students in Chao’s course work with lighting grids, audio mixers, and cameras—equipment that all needs to be sanitized after each use. While Chao said he was annoyed his students would only get three hours of studio time as opposed to the usual four, he noted that he’s come to appreciate the benefits of Zoom to go over footage clips or meet with students to troubleshoot.

“I wouldn’t have commuted into campus to sit down for 15 to 20 minutes with students,” Chao, who added he’s had 100 percent attendance in his classes so far, said. “But with Zoom, it’s like, ‘Yeah, sure. Let’s meet Sunday evening.’”

For shoots that are on location as opposed to in a college studio, a maximum of eight people can be on set at a given time, compelling some students to rethink long-term projects altogether.

Senior VMA major Sophia Speciale was planning to shoot her BFA film, Into the Light, in May, but pushed filming until the fall after the pandemic hit. The 15-minute film was supposed to have a 50-person scene in a theatre. To adapt to the new restrictions, she decided to scale the project back. Now, it will be a five-minute film focusing on a two-person scene from the original draft.

“My thinking was that rather than spreading myself all across this huge project, if I just focused on like a five-minute piece, then I could put all my energy and effort into that piece,” she said.

Students and professors stressed that while COVID-19 restrictions may keep them from teaching or learning everything they could be, different lessons can be learned by persevering through the circumstances.

“The more valuable skills that I’ve been learning are taking things as they come,” Kosiarek said. “That’s a big lesson that has come from my classes, and from just living in this time.”